Sureños ([suˈɾe.ɲos]; Spanish: Southerners)‍, Southern United Raza, Sur 13 or Sureños X3 are groups of loosely affiliated gangs[35] that pay tribute to the Mexican Mafia while in U.S. state and federal correctional facilities. Many Sureño gangs have rivalries with one another, and the only time this rivalry is set aside is when they enter the prison system.[3][28][36] Thus, fighting is common among different Sureño gangs even though they share the same common identity. Sureños have emerged as a national gang in the United States.[4]

The Sureños main stronghold is in southern California. They have a heavy presence in California, Nevada, Arizona, Texas, New Mexico and Utah. They have a smaller presences in Illinois, Oklahoma, Georgia, Oregon and Washington. They have spread as far east as New York.[37] Sureños have been documented in the U.S. military, found in both U.S. and overseas bases.[38] They also can be found in some parts of Mexico. Sureños also maintain relationships with various drug trafficking organizations based in Mexico.[3][4][28] They have been confirmed in 35 different states in the U.S.[39] They are with the Gulf Cartel.[16]

The term Sureño means "Southerner" in Spanish. Even though Sureños were established in 1968, the term was not used until the 1970s as a result of the continued conflict between the Mexican Mafia and Nuestra Familia in California's prison system.[3] As a result of these prison wars, all Hispanic California street gangs align themselves with the Sureño or Norteño movements—with very few exceptions, such as the Fresno Bulldogs and the Maravilla gangs of East Los Angeles, California.[2] When a Sureño is asked what being a Sureño means, members answer, "A Sureño is a foot soldier for the Mexican Mafia."[41]

In 2009, members of the Sureños were charged in the deaths of rival Norteño gang members Alvaro Garcia-Pena and Intiaz Ahmed, who were killed at Alvarado's Bar & Grill in Richmond, California. One member of the Sureños pleaded guilty and was sentenced to 25 years in prison. Other members from the Sureños gang received other sentences for their involvement in the shooting.[42]

In 2010, 51 Sureños were arrested in a California narcotics sting. The investigation identified eight Sureño gangs involved in various criminal activities, including the distribution of narcotics. The investigation also resulted in the seizure of more than 19 pounds of methamphetamine, a methamphetamine conversion laboratory, 1.5 kilograms of cocaine, small amounts of crack cocaine, 25 pounds of marijuana, 35 firearms, and $800,000 in currency and property. The charges against the gang members were conspiracy to distribute methamphetamine, cocaine and marijuana, street terrorism and firearms violations.[43]

While sur is the Spanish word for south, among Sureños "SUR" also stands for Southern United Raza.[44] Sureños use the number 13—which represents the thirteenth letter of the alphabet, the letter M—in order to mark their allegiance to the Mexican Mafia.[39][3][45] Common Sureño gang markings and tattoos include, but are not limited to: Sur, XIII, X3, 13, Sur13, uno tres, trece and 3-dots.[45] Although there are many tattoos used by Sureños, there is only one tattoo that proves or validates membership. The X3 tag can also be commonly spotted in graffiti. The word Sureño or Sureña must be earned.[3] Most Sureños are of Mexican descent, but some Sureño gangs allow members from various other ethnic backgrounds to join their ranks, making Sureños multiethnic.[3] They also favor blue or grey sport clothing, such as Los Angeles Dodgers, Los Angeles Rams and sometimes Los Angeles Lakers. Upstate Sureños, however, wear Dallas Cowboys, San Jose Sharks and Oakland Raiders clothing.[citation needed] 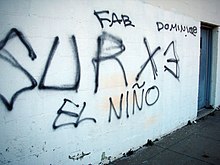 Graffiti, also known as tagging, is used to mark a specific set's territory

Sureño groups are involved in many aspects of criminal activity including homicides,[2][46] drug trafficking,[2][47] kidnapping, and assaults.[48] They are also heavily engaged in human trafficking.[3] There have been many high-profile criminal cases involving Sureños in a variety of states. Their primary focus is the distribution of various forms of narcotics and carrying out orders handed by the Mexican Mafia. Police departments have a difficult time dealing with this gang because of its decentralized hierarchy at the street level. Law enforcement attempts to limit the influence of the Mexican Mafia over the various Sureño street gangs have been met with little success. By the late 1990s, a federal task force was set up in order to investigate the gang's involvement in the illegal drug trade; this resulted in the arrest of several of its members. The authorities confiscated thousands of dollars in drugs and money, as reported by the Los Angeles Times and local news channels. The group has historically quarreled with various rival gangs for placement and competition, which has resulted in many drive-by shootings and deaths. On August 24, 2004, a law enforcement preliminary injunction terminated the active members of the 38th Street gang, out of the streets,[clarification needed] banning them from using firearms, alcohol, graffiti and other dangerous materials in public.[49]

Sureños have a stronghold in San Francisco's Mission District, who feud with fellow Sureño factions and Nortenos. Surenos have had a history of beefing with other Sureño individuals, whether it be gang in-fighting, or different Sureno cliques fighting each other. For instance, two rival Sureño gangs fighting over territorial grounds of Southwest Community Park in Santa Rosa, California, lead to the shooting death of an 18-year-old man in 2008. The neighborhood South Park is home to a portion of the city’s Angelo Heights Sureños, named after the Angelino Heights neighborhood in Los Angeles in which its original members came from. Sureños also have had territorial fighting in San Jose and Oakland.