Taschen is a luxury art book publisher founded in 1980 by Benedikt Taschen in Cologne, Germany.[4] As of January 2017, Taschen is co-managed by Benedikt and his eldest daughter, Marlene Taschen. 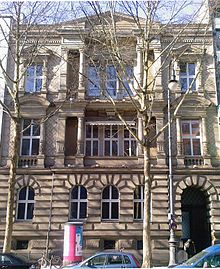 Taschen publications are available in a various sizes, from oversized tomes to small pocket-sized books. The company has also produced calendars, address books, and postcards sets.[6]

In 1985, Taschen introduced the Basic Art series with an inaugural title on Salvador Dalí.[7] Today's series comprises over 100 titles available in up to thirty languages, each about a separate artist, from classical to contemporary.[8] Further series followed, alongside an expansion into new themes like architecture, design, film, and lifestyle. For example, the firm also publishes a "Basic Architecture" series in the same style as "Basic Art" that covers some of the most prominent architects in history.[9]

In the spring of 2014, the firm's Basic Art Series was criticized in Swedish public media for its focus on male artists. The series then consisted of 95 books, only five of which were female artists. Malmö Konsthall in Sweden was the first institution to report the disparity highlighted by the artists Ditte Ejlerskov and EvaMarie Lindahl.[10][11][12]

In 1999, Taschen expanded to the luxury market with the Helmut Newton SUMO.[13]

Signed and limited to 10,000 copies, the folio-sized publication quickly sold out. It later became the most expensive book published in the 20th century,[14] with SUMO copy number 1 selling at auction for $304,000.[15]

This book paved the way for Taschen's GOAT – Greatest Of All Time, an homage to Muhammad Ali, which Der Spiegel called "the biggest, heaviest, most radiant thing ever printed in the history of civilization."[16]

Taschen Basic Architecture is a series of books on architects published by Taschen. Each book looks at a different architect, with a biography and pictures of their work.[18]

Taschen's Bibliotheca Universalis is a series of famous artworks in an affordable (about 15 euros) hardback format (14 x 19.5 cm).[19] They are generally trilingual, with English, German and French texts and legends. Some books are also published in Spanish, Italian and Portuguese.[citation needed]

Through the mid-to-late 1990s, the company expanded by opening stores in other cities. Dedicated flagship Taschen bookstores, conceived in collaboration with artists and designers such as Albert Oehlen, Beatriz Milhazes, Jonas Wood, Marc Newson, Mark Grotjahn, Philippe Starck, and Toby Ziegler, are located in: