The modern incarnation of the Justice Department was formed in 1870 during the Ulysses S. Grant presidency. The department comprises federal law enforcement agencies, including the Federal Bureau of Investigation, the U.S. Marshals Service, the Bureau of Alcohol, Tobacco, Firearms and Explosives, the Drug Enforcement Administration, and the Federal Bureau of Prisons. It also has eight major divisions of lawyers who represent the U.S. federal government in litigation: the Civil, Criminal, Civil Rights, Antitrust, Tax, Environment and Natural Resources, National Security, and Justice Management Divisions. The department also includes the U.S. Attorneys' Offices for each of the 94 U.S. federal judicial districts.

The primary actions of the DOJ are representing the U.S. government in legal matters and running the federal prison system.[8][9] The department is also responsible for reviewing the conduct of local law enforcement as directed by the Violent Crime Control and Law Enforcement Act of 1994.[10]

The office of the attorney general was established by the Judiciary Act of 1789 as a part-time job for one person, but grew with the bureaucracy. At one time, the attorney general gave legal advice to the U.S. Congress, as well as the president; however, in 1819, the attorney general began advising Congress alone to ensure a manageable workload.[11] Until March 3, 1853, the salary of the attorney general was set by statute at less than the amount paid to other Cabinet members. Early attorneys general supplemented their salaries by running private law practices, often arguing cases before the courts as attorneys for paying litigants.[12] The lightness of the office is exemplified by Edward Bates (1793–1869), Attorney General under Abraham Lincoln (1861 to 1864). Bates had only a small operation, with a staff of six. The main function was to generate legal opinions at the request of Lincoln and cabinet members, and handle occasional cases before the Supreme Court. Lincoln's cabinet was full of experienced lawyers who seldom felt the need to ask for his opinions. Bates had no authority over the US Attorneys around the country. The federal court system was handled by the Interior Department; the Treasury handled claims. Most of the opinions turned out by Bates's office were of minor importance. Lincoln gave him no special assignments and did not seek his advice on Supreme Court appointments. Bates did have an opportunity to comment on general policy as a cabinet member with a strong political base, but he seldom spoke up.[13]

Following unsuccessful efforts in 1830 and 1846 to make attorney general a full-time job,[14] in 1867, the U.S. House Committee on the Judiciary, led by Congressman William Lawrence, conducted an inquiry into the creation of a "law department" headed by the attorney general and also composed of the various department solicitors and United States attorneys. On February 19, 1868, Lawrence introduced a bill in Congress to create the Department of Justice. President Ulysses S. Grant signed the bill into law on June 22, 1870.[15]

Grant appointed Amos T. Akerman as attorney general and Benjamin H. Bristow as America's first solicitor general the same week that Congress created the Department of Justice. The department's immediate function was to preserve civil rights. It set about fighting against domestic terrorist groups who had been using both violence and litigation to oppose the 13th, 14th, and 15th Amendments to the Constitution.[16]

Both Akerman and Bristow used the Department of Justice to vigorously prosecute Ku Klux Klan members in the early 1870s. In the first few years of Grant's first term in office, there were 1000 indictments against Klan members, with over 550 convictions from the Department of Justice. By 1871, there were 3000 indictments and 600 convictions, with most only serving brief sentences, while the ringleaders were imprisoned for up to five years in the federal penitentiary in Albany, New York. The result was a dramatic decrease in violence in the South. Akerman gave credit to Grant and told a friend that no one was "better" or "stronger" than Grant when it came to prosecuting terrorists.[17] George H. Williams, who succeeded Akerman in December 1871, continued to prosecute the Klan throughout 1872 until the spring of 1873, during Grant's second term in office.[18] Williams then placed a moratorium on Klan prosecutions partially because the Justice Department, inundated by cases involving the Klan, did not have the manpower to continue prosecutions.[18]

The "Act to Establish the Department of Justice" drastically increased the attorney general's responsibilities to include the supervision of all United States attorneys, formerly under the Department of the Interior, the prosecution of all federal crimes, and the representation of the United States in all court actions, barring the use of private attorneys by the federal government.[19] The law also created the office of Solicitor General to supervise and conduct government litigation in the Supreme Court of the United States.[20]

With the passage of the Interstate Commerce Act in 1887, the federal government took on some law enforcement responsibilities, and the Department of Justice was tasked with performing these.[21]

In 1884, control of federal prisons was transferred to the new department, from the Department of Interior. New facilities were built, including the penitentiary at Leavenworth in 1895, and a facility for women located in West Virginia, at Alderson was established in 1924.[22]

In 1933, President Franklin D. Roosevelt issued an executive order which gave the Department of Justice responsibility for the "functions of prosecuting in the courts of the United States claims and demands by, and offsenses [sic] against, the Government of the United States, and of defending claims and demands against the Government, and of supervising the work of United States attorneys, marshals, and clerks in connection therewith, now exercised by any agency or officer..."[23]

The U.S. Department of Justice building was completed in 1935 from a design by Milton Bennett Medary. Upon Medary's death in 1929, the other partners of his Philadelphia firm Zantzinger, Borie and Medary took over the project. On a lot bordered by Constitution and Pennsylvania Avenues and Ninth and Tenth Streets, Northwest, it holds over 1,000,000 square feet (93,000 m2) of space. The sculptor C. Paul Jennewein served as overall design consultant for the entire building, contributing more than 50 separate sculptural elements inside and outside.[citation needed]

Various efforts, none entirely successful, have been made to determine the original intended meaning of the Latin motto appearing on the Department of Justice seal, Qui Pro Domina Justitia Sequitur (literally "Who For Lady Justice Strives"). It is not even known exactly when the original version of the DOJ seal itself was adopted, or when the motto first appeared on the seal. The most authoritative opinion of the DOJ suggests that the motto refers to the Attorney General (and thus, by extension, to the Department of Justice) "who prosecutes on behalf of justice (or the Lady Justice)".[24]

The motto's conception of the prosecutor (or government attorney) as being the servant of justice itself finds concrete expression in a similarly-ordered English-language inscription ("THE UNITED STATES WINS ITS POINT WHENEVER JUSTICE IS DONE ITS CITIZENS IN THE COURTS") in the above-door paneling in the ceremonial rotunda anteroom just outside the Attorney General's office in the Department of Justice Main Building in Washington, D.C.[25] The building was renamed in honor of former Attorney General Robert F. Kennedy in 2001. It is sometimes referred to as "Main Justice".[26] 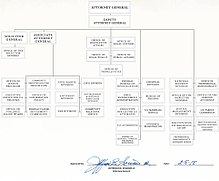 Organizational chart for the Department of Justice (click to enlarge)

The Justice Department also had a War Division during World War II. It was created in 1942 and disestablished in 1945.[36]

Several federal law enforcement agencies are administered by the Department of Justice:

Other offices and programs

In 2003, the Department of Justice created LifeAndLiberty.gov, a website that supported the USA PATRIOT Act. It was criticized by government watchdog groups for its alleged violation of U.S. Code Title 18 Section 1913, which forbids money appropriated by Congress to be used to lobby in favor of any law, actual or proposed.[46] The website has since been taken offline.

On October 5, 2021, U.S. Deputy Attorney General Lisa Monaco has announced the formation of a "Cryptocurrency Enforcement Team" during the Aspen Cyber Summit.[47]