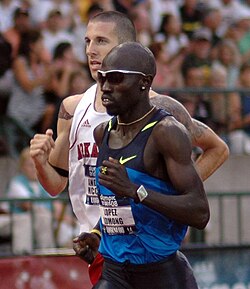 The United States Olympic trials for the sport of track and field is the quadrennial meet to select the United States representatives at the Olympic Games. Since 1992, the meet has also served as the year's USA Outdoor Track and Field Championships. Because of the depth of competition in some events, this has been considered by many to be the best track meet in the world. The event is regularly shown on domestic U.S. Television and covered by a thousand members of the worldwide media.[1] As with all Olympic sports, the meet is conducted by the national governing body for the sport, currently USA Track & Field (USATF), which was previously named The Athletics Congress (TAC) until 1992. Previous to the formation of TAC in 1979, the national governing body for most sports was the Amateur Athletic Union (AAU).

Entry to the United States Olympic trials is open to any U.S. Citizen who has achieved the "A" standard, and based on superior performance, sufficient "B" standard athletes to fill out the field. Since 1972 there have been a minimum of 24 entries in any event, with the popular sprint events 100 meters, 200 meters, 400 meters and 110 meter hurdles having a minimum of 32 entries.[2] Since 1992, athletes achieving the "A" standard are funded to attend the Olympic trials, while "B" standard athletes have to pay their own way to the meet.