* – Indicates the athlete competed in preliminaries but not the final

U.S. athletes have so far achieved qualifying standards in the following athletics events (up to a maximum of 3 athletes in each event at the 'A' Standard, and 1 at the 'B' Standard).[3][4] The team was selected based on the results of the 2004 United States Olympic Trials.

Adam Nelson originally claimed a silver medal in men's shot put. On December 5, 2012, the International Olympic Committee and the IAAF stripped off Ukrainian shot putter Yuriy Bilonoh's gold medal after drug re-testings of his samples were discovered positive. Following the announcement of Bilonoh's disqualification, Nelson's medal was upgraded to gold.[5]

The United States had been represented in one out of five events. 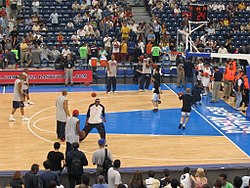 The following is the United States roster in the men's basketball tournament of the 2004 Summer Olympics.[6]

The following is the United States roster in the women's basketball tournament of the 2004 Summer Olympics.[8]

Because only three horse and rider pairs from each nation could advance beyond certain rounds in the individual events, five American pairs did not advance despite being placed sufficiently high. They received rankings below all pairs that did advance.

"#" indicates that the score of this rider does not count in the team competition, since only the best three results of a team are counted.

The following is the American squad in the women's football tournament of the 2004 Summer Olympics.[9]

U.S. sailors have qualified one boat for each of the following events.

M = Medal race; OCS = On course side of the starting line; DSQ = Disqualified; DNF = Did not finish; DNS= Did not start; RDG = Redress given

Final Group Standings The top four teams advanced to the semifinal round.