Home > Roald > Bio
American sprinter
This article is about the c. 2010 medalist. For the 1980s medalist, see Wallace Spearmon Sr.

Wallace Spearmon Jr. (born December 24, 1984, in Chicago, Illinois, USA) is a retired American sprint athlete, who specializes in the 200 meters. He is a two-time NCAA outdoor champion in the 200 m and won the silver medal in the event at the 2005 World Championships in Athletics. He has a personal best of 19.65 seconds for the distance, making him the ninth fastest 200 meter runner of all time, and he formerly held the indoor American record.

He has won the bronze medal twice at the World Championships in Athletics in 2007 and 2009. He also finished third at the 2008 Summer Olympics, but was later disqualified for stepping out of his lane.

Spearmon initially finished in the bronze medal position in the 200 m in the 2008 Summer Olympics in Beijing, but was disqualified for stepping out of his lane. The second-place finisher, Churandy Martina of the Netherlands Antilles, was also disqualified, giving Americans Shawn Crawford and Walter Dix the silver and bronze medals, respectively.[4]

He posted a quick time of 19.98 seconds in the 200 m in Kingston, Jamaica in April 2010, finishing behind Usain Bolt.[5] He reached the 2010 IAAF Diamond League 200 m final at the Weltklasse Zurich meeting, and (in the absence of points leader Walter Dix) he won the first Diamond Race Trophy with a meeting record of 19.79 seconds.[6] Following the Diamond League win, he ran 19.85 seconds to win at the Rieti IAAF Grand Prix.[7]

Spearmon finished 21st at the 2013 World Championships, running a time of 20.66 seconds in the semi-final .

At a meeting in Edmonton in July, 2014, Spearmon tested positive for methylprednisolone contained in a medicine he was taking without asking for an exemption. USADA accepted the excuse so it was treated as a minor violation. On September 19, 2014, it was announced he would receive a 3-month suspension, backdated to August 27.[9]

Spearmon attended the 2015 World Championships, but did not start his heat.

Spearmon's father, Wallace Spearmon Sr., was also a sprinter. He was the 1987 bronze medalist in the 200 meters at the Pan American Games.

He is good friends with fellow sprinter Usain Bolt; they are known for their jokes and good friendship.

On an April 2011 episode of MythBusters, he worked with Adam Savage and Jamie Hyneman to investigate the possibility of a human running on water. In May 2013 he returned to the show to race 30 ft against a race car. 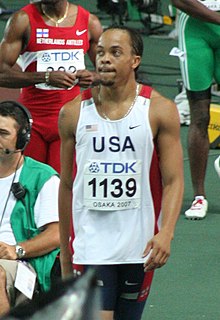 Spearmon at the 2007 World Championships