Home > Roald > Bio
This article is about the track and field athlete. For other uses, see Willie Banks (disambiguation). 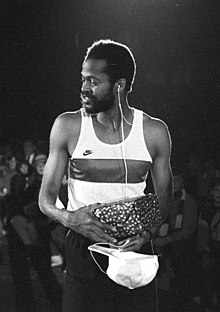 William Augustus Banks III (born March 11, 1956) is an American athlete. Born at Travis Air Force Base, California, he grew up in San Diego County and went to Oceanside High School. Banks is an Eagle Scout.[1]

Banks was a track & field athlete competing in the triple jump. On June 16, 1985 he set a world record of 17.97 m (58 feet 11.5 inches) at the national championships in Indianapolis, Indiana, USA. He finished second in the NCAA Championships in 1977 and 1978. He earned his B.A. and Juris Doctor (J.D.) from UCLA. He broke the American triple jump record in 1981. He qualified for the 1980 U.S. Olympic team but did not compete due to the U.S. Olympic Committee's boycott of the 1980 Summer Olympics in Moscow, Russia. He was one of 461 athletes to receive a Congressional Gold Medal instead.[2] Banks was a member of the 1984 and 1988 Olympic teams and participated with the 1983 and 1987 IAAF World Championships in Athletics World Championship teams. He was awarded the Track & Field News and United States Olympic Committee Athlete of the Year in 1985 and won the Jesse Owens Award as the Outstanding Athlete in Track and Field.[3]

He served USA Track & Field as chair of the Athletes Advisory Committee in addition to serving as an organization vice president.

Banks will always be remembered as one of the most flamboyant athletes to compete in track and field. He is the originator of the now common hand clapping that takes place during many track and field events,[4] and which he first did at DN-galan in 1981.[5]

Banks exuberant personality was also present in his jumping. He has been reported as laughing during some of his jumps. When he set the world record of 17.97 m at the 1985 USA Outdoor Track and Field Championships, his attention seemed more intent on completing his jump in order to cheer for teammate Louise Romo who was completing her 800 metres on the track adjacent to the runway at the same time.[6][7] He held that record for over ten years until Jonathan Edwards broke it for the first time in 1995 with 17.98m. He also jumped 18.20m at Indianapolis in 1988, but this was assisted by an over the limit wind reading of 5.2 m/s. Held Masters Triple Jump (M45 & M60) and Masters High Jump (M55 & M60) Records.

Banks was inducted into the USA National Track & Field Hall of Fame in 1999 and was still competing at an advanced age. In 2006, he cleared an impressive 14.00 m to head the 2006 World Masters rankings in the 50–54 age group, just 7 cm behind that age-group's world record. He won the 2007 World Masters Athletics Championships in that same age group. On September 22, 2012, Banks became the oldest American to clear 6 feet in the high jump at the age of 56 using just a 3-step approach and the classic "roll" technique.[8] For that performance, Banks was named the USATF Athlete of the Week.[9]

Banks was President of the US Olympians Association from 2005 to 2008.[10] In 2008 he joined the newly reconstituted USATF Board of Directors.[11] Banks was on a panel on an ESPN "Outside the Lines" episode regarding athlete involvement in social issues, dated May 18, 2008.