Wilshire Boulevard is a prominent 15.83 mi (25.48 km) boulevard in the Los Angeles area of Southern California, extending from Ocean Avenue in the city of Santa Monica east to Grand Avenue in the Financial District of downtown Los Angeles. One of the principal east-west arterial roads of Los Angeles, it is also one of the major city streets through the city of Beverly Hills. Wilshire Boulevard runs roughly parallel with Santa Monica Boulevard from Santa Monica to the west boundary of Beverly Hills. From the east boundary it runs a block south of Sixth Street to its terminus.

Wilshire Boulevard and the Los Angeles County Museum of Art, 1965 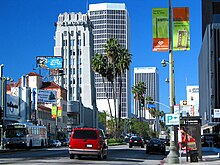 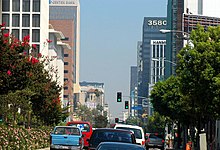 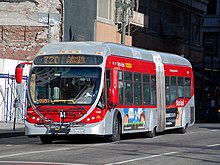 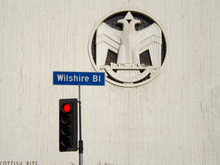 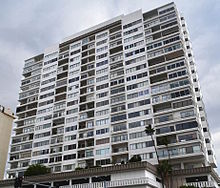 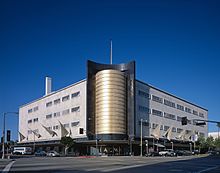 Wilshire Boulevard through Miracle Mile in the 1960s

Wilshire Boulevard through Miracle Mile in the 1930s

Wilshire Boulevard at the eastern border of Beverly Hills

Wilshire Boulevard is densely developed throughout most of its span, connecting five of Los Angeles's major business districts and Beverly Hills to one-another. Many of the post-1956 skyscrapers in Los Angeles are located along Wilshire; for example, the Wilshire Grand Center, which is the tallest building in California, is located on the Figueroa and Wilshire intersection. One Wilshire, built in 1966 at the junction of Wilshire and Grand, is said to be "...the main hub of the internet for the entire Pacific Rim" due to the large concentration of telecommunications companies renting space there.[1][2] Aon Center, at one point Los Angeles' largest (and presently third-largest) tower, is at 707 Wilshire Boulevard in downtown Los Angeles.[3]

The stretch of the boulevard between Fairfax and Highland Avenues is known as the Miracle Mile.[4] Many of Los Angeles's largest museums are amidst this concentration of cultural institutions. The area just to the east, between Highland Avenue and Wilton Place, is referred to as the "Park Mile".[5] Between Westwood and Holmby Hills, several tall glitzy condominium buildings overlook this part of Wilshire, giving it the title of Millionaire's Mile. This section is also known as the Wilshire Corridor and Condo Canyon.

The Wilshire Corridor, located next to Century City, is one of Los Angeles's busiest districts, and contains many high-rise residential towers. The Fox and MGM studios are located in a series of skyscrapers, along with many historic Los Angeles hotels.

Wilshire Boulevard is also the principal street of Koreatown, the site of many of Los Angeles' oldest buildings and skyscrapers. Koreatown and Mid-Wilshire are among Los Angeles's most densely populated districts.

Wilshire Boulevard originated as one of the central pathways constructed by the Tongva tribes residing in the region prior to the exploration of the conquistadores.[6] At the time of the founding of Los Angeles, Wilshire Boulevard was one of the main arteries connecting the largest Tongva city in the area, then known as Yaanga, which eventually become Union Station, to the Pacific Ocean.[7]

From the founding of Los Angeles through nearly all of the 1800s, Wilshire Boulevard was known as "Calle de los Indios."[8]

Before the Spanish settlements of Los Angeles, much of the length of Wilshire Boulevard can be traced back to the indigenous Tongva people who used it to bring back tar from the La Brea pits in today's Miracle Mile section of Wilshire Blvd, back to their settlement on the coast. This road was later used by Spanish explorers and settlers, calling it El Camino Viejo ('The Old Road'). The route that ultimately became Wilshire crossed the original pueblo of Los Angeles and five of the original Spanish land grants, or ranchos.[9]

Wilshire was pieced together from various streets over several decades. It began in the 1870s as Nevada Avenue in Santa Monica, and in the 1880s as Orange Street between Westlake (now MacArthur) Park and downtown. Nevada and Orange were later renamed as parts of Wilshire.[9]

In 1895, Henry Gaylord Wilshire (1861–1927), a developer, publisher, and revolutionary who made and lost fortunes in real estate, farming, and gold mining,[10] donated land to the City of Los Angeles for a boulevard stretching westward from a tract of luxury homes he was developing in Westlake Park (today's MacArthur Park). His conditions for the donation of the 120 ft (37 m) wide by 1,200 ft (370 m) long strip of land along the 35 acres (14 ha) barley field he was subdividing[11] were that it be named for him and that railroad lines and commercial or industrial trucking would be banned.[9] The road first appeared on a map under its present name in 1895.[12] A historic apartment building on the corner of Wilshire Blvd. and S. Kenmore Ave., the Gaylord, carries his middle name.[13][14]

Wilshire Boulevard formerly ended at the MacArthur Park lake, but in 1934 a berm was built for it to cross and link up with the existing Orange Street (which ran from Figueroa to Alvarado) into downtown Los Angeles. Orange Street was renamed Wilshire and extended east of Figueroa to Grand. This divided the lake into two halves; the northern half was later drained.[15]

The Wilshire Boulevard home of J. Paul Getty was used as the film set for the 1950 film Sunset Boulevard: it was demolished in 1957.[16]

All of the boulevard is at least four lanes in width, and most of the portion between Hoover Street and Robertson Boulevard has a raised center median. The widest portion of the boulevard is located in the business district of central Westwood, where mobs of pedestrians crossing Wilshire at Westwood Boulevard must traverse ten lanes (including two left-turn pockets). According to a 1991 study by the Los Angeles Department of Transportation, this and the nearby intersection of Wilshire and Veteran are among the busiest in Los Angeles.[17]

The D and B subway lines of the Los Angeles Metro run along Wilshire Boulevard from just past the 7th/Figueroa Street station before serving the Westlake/MacArthur Park and Wilshire/Vermont stations, where the D Line continues along Wilshire to serve two stations at Normandie Avenue and at Western Avenue in Koreatown, while the B Line branches off to terminate in North Hollywood.

The construction of the future Purple Line extension along Wilshire Boulevard commenced in November 2014. The construction timeline would see the project from the existing Wilshire/Western station to the planned Wilshire/La Cienega station on the corner of Wilshire and La Cienega Boulevard, to be completed by 2023. The second phase got officially under way on February 23, 2018 from Wilshire/La Cienega to Century City Station. Phase three of the Purple Line extension, when fully completed, will extend to UCLA and Westwood/VA Hospital, and will follow Wilshire Boulevard for most of its route. Phase four to downtown Santa Monica is still in the planning stages and has no funding.

Metro Local Line 20, Metro Rapid Line 720, and Santa Monica Transit Line 2 operate along Wilshire Boulevard. Due to the high ridership of line 720, 60-foot (18 m) NABI & New Flyer articulated buses are used on this route, and bus lanes are in place along some segments of the line.

The aging sections of Wilshire Boulevard in the city of Los Angeles are notorious for their giant potholes.[18]

Communities from west to east

Wilshire Boulevard runs through or near the following communities:[19]

Landmarks from west to east

The entire route is in Los Angeles County.