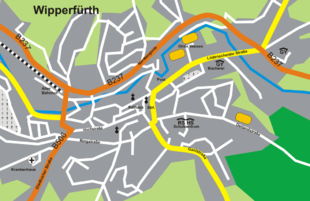 Map of the city 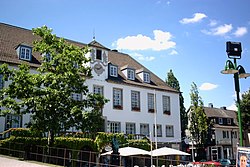 listen)) is a municipality in the Oberbergischer Kreis of North Rhine-Westphalia, Germany, about 40 km north-east of Cologne, and the oldest town in the Bergischen Land.

The eldest documentary mention dates from 1131. In the Siegburger Mirakelbuch the place is already designated Oppidum(=town). Manner of writing of the first naming: "Weperevorthe". Wipperfürth received town rights between 1217 and 1222. Since 1283 the administration of the town was governed by count Adolf V. von Berg. Already in 1275 king Rudolf von Habsburg allowed the count to move his mint from Wildberg to Wipperfürth. Here, Pfennige were stamped according to Cologne model. In 1328, with the privilege of king Louis the Bavarian the first coinage of Groschen in Germany began in Wipperfürth. Since the 14th century the town was a member of the Hanse. Businesspeople of the town traveled to Stockholm, Dorpat, Malmö, Novgorod, Reval and Lübeck. The town coat of arms of 1267 shows a church in merlons-reinforced wall. Leftovers of this town wall can still be found on the Klosterberg. The oldest building are located at the market, together with the market well. The development of the town was hindered by numerous town fires: 1333, 1352, 1368, 1383, 1404, 1412 and 1465. From 1815–1932 Wipperfürth was capital town of the district with the same name.

Wipperfürth lies on the flow Wupper which is designated in the upper reaches to the east of the town Wipper.

The coat of arms of Wipperfürth

The arms were granted on 9 December 1975 but were in use a long time before. Wipperfürth received city rights between 1217 and 1222. The oldest seal dates from around 1250 and already shows a city wall, church and a small shield with the arms of the Counts of Berg, who ruled over the city. In the 14th century the small shield was removed. The present arms are based and nearly identical to the composition of the first seal. The city wall denotes the civic character of Wippenfürth, the church is the local St. Nicholas church.

Culture and places of interest

By far the oldest church in Wipperfürth is the Catholic parish church St.-Nikolaus placed in the downtown of Wipperfürth. Not far away, the Protestant church was built next to the marked-place in 1875. The so-called Antoniuskirche ("Antonius-church", a minister) was built on the Klosterberg ("cloister hill").

During the industrial revolution several companies originated in the area of the textile industry. The most important industry company is the electric light bulb factory founded in 1904 Radium.

Wipperfürth lies in the intersection of the federal highways B 237 (Remscheid- Meinerzhagen) and B 506 (Cologne – Wipperfürth). The B 256 unidirectional Gummersbach in the place Ohl for the B 237.