The 1928 Summer Olympics (Dutch: Olympische Zomerspelen 1928), officially known as the Games of the IX Olympiad (Dutch: Spelen van de IXe Olympiade) and commonly known as Amsterdam 1928, was an international multi-sport event that was celebrated from 28 July to 12 August 1928 in Amsterdam, Netherlands. The city of Amsterdam had previously bid for the 1920 and 1924 Olympic Games, but was obliged to give way to war-torn Antwerp in Belgium for the 1920 Games and Pierre de Coubertin's Paris for the 1924 Games.

The only other candidate city for the 1928 Olympics was Los Angeles, which would eventually be selected to host the Olympics four years later. In preparation for the 1932 Summer Olympics, the United States Olympic Committee reviewed the costs and revenue of the 1928 Games. The committee reported a total cost of US$1.183 million with receipts of US$1.165 million, giving a negligible loss of US$18,000, which was a considerable improvement over the 1924 Games.[2]

The United States won the most gold and overall medals.

The Olympic cauldron in front of the Amsterdam Olympic Stadium.

Women's athletics and team gymnastics debuted at these Olympics,[13] in spite of criticism. Five women's athletics events were added: 100 meters, 800 meters, high jump, discus, and 400 meter hurdles. In protest of the limited number of events, British women athletes, boycotted the Games.[14] Halina Konopacka of Poland became the first female Olympic track and field champion. Reports that the 800 meter run ended with several of the competitors being completely exhausted were widely (and erroneously) circulated. As a result, the IOC decided that women were too frail for long-distance running, and women's Olympic running events were limited to 200 meters until the 1960s.[15]

Tennis disappeared from the program, only to reappear in 1968 as a demonstration sport.

These Games also included art competitions in five categories: architecture, painting, sculpture, literature, and poetry. However, the IOC no longer considers these to be official medal events, so the medals awarded are not included in today's Olympic medal counts.[16] 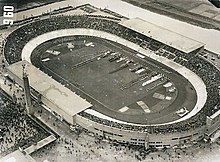 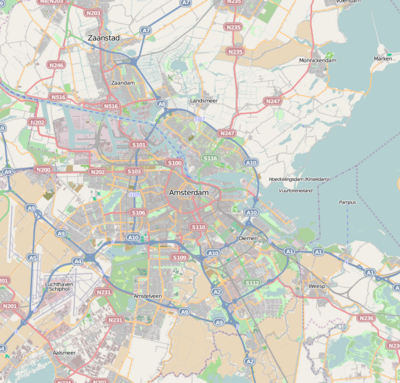 Zuiderzee
class=notpageimage|
Map of the Amsterdam region with Olympic venues marked. The Krachtsportgebouw, Oude Stadion and Schermzaal were located next to the Olympic Stadium.

Ringvaart
class=notpageimage|
Map of the Netherlands with Olympic venues marked

A total of 46 nations were represented at the Amsterdam Games. Malta, Panama, and Rhodesia (now Zimbabwe) competed at the Olympic Games for the first time. Germany returned after having been banned in 1920 and 1924.[20]

These are the top ten nations that won medals at the 1928 Games.

The official poster for the Games displaying a running man in a white shirt was designed by Jos Rovers however the IOC never succeeded in obtaining the copyright of the image. The IOC used a different poster, with the German text Olympische Spiele, and an athlete partly covered in the Dutch national flag, holding a peace leaf in his hand. The poster was made for a German book about the Amsterdam Olympics.[21]

The last living competitor of the 1928 Summer Olympics was Clara Marangoni, a member of the silver medal-winning Italian gymnastic team who had been twelve years old during the Olympics. Marangoni died 18 January 2018, at the age of 102 as the oldest living Olympic medalist at the time of her death.[22]