Abilene Christian University (ACU) is a private Christian university in Abilene, Texas. It was founded in 1906 as Childers Classical Institute. ACU is one of the largest private universities in the Southwestern United States and has one of the 200 largest university endowments in the United States.[6] Affiliated with Churches of Christ, the university is nationally recognized for excellence in service learning, undergraduate research, and undergraduate teaching.[7]

Abilene Christian University grew from an idea held by A.B. Barret and Charles Roberson to form a school in West Texas. The Churches of Christ in Abilene agreed to back the project. J.W. Childers sold Barret land and a large house west of the town, and lowered the price with the stipulation that the school would be named in his honor. Childers Classical Institute opened in the fall of 1906, with 25 students.[8] It initially included a lower school starting in the seventh grade.[9]

When Jesse P. Sewell became president of the institute in 1912, the school began using Abilene Christian College on all its printed material. In 1920, the school paid the Childers family $4,000 and formally changed the name.

The Optimist, the university's student-produced newspaper, was founded in 1912. The Prickly Pear, the school yearbook, was founded in 1916. The campus literary-arts magazine (now The Shinnery Review, formerly The Pickwicker) has been in production since 1933. 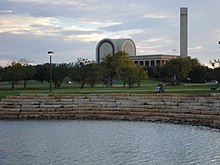 From the time of its founding to the present, the university has been governed by a board of trustees made up of members of the Churches of Christ.

Abilene Christian College first received school accreditation in 1951, when it became an accredited member of the Commission on Colleges of the Southern Association of Colleges and Schools.[10]

On February 22, 1976, the name of Abilene Christian College was changed to Abilene Christian University. The university celebrated its centennial in the 2005–06 school year. In July 2015, the university signed a lease for an expansion campus located in Addison, Texas.[11] Called ACU Dallas, the new campus began offering several new graduate programs, including an MBA and Ed.D. in organizational leadership.[12]

The school established an NPR station, KACU, in 1986. Initially, the community was concerned that the school might use the station for proselytizing, and for the station's first ten years, an advisory board composed of community members served to monitor the station against this possibility.[13] The JMC Network, a converged student media operation, was created in 2008 to produce all student-led news media. On October 18, 2008, the school hosted a live broadcast of Minnesota Public Radio's long-running A Prairie Home Companion radio show from the campus' Moody Coliseum.[14][15]

On Wednesday, August 23, 2017, the NCAA Board of Directors voted to pass ACU through to full Division I status, thus making them eligible for postseason play.

The university was officially segregated, for white students only, until 1962,[16] when Billy Curl became the first black student to enroll.[17] The university currently bars employees, but not students, from dating people of the same sex.[18] In 2016 the university recognized an LGBT student association.[19] 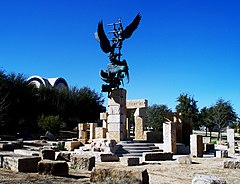 Jacob's Dream statue and display on the ACU campus. The artwork is based on Genesis 28:10–22 and graphically represents the scenes alluded to in the hymn "Nearer, My God, to Thee" and the spiritual "We Are Climbing Jacob's Ladder" as well as other musical works.

ACU is one of only seven faith-based institutions with a press.[25] ACU Press, founded in 1983 to print books about Churches of Christ theology, is now a member of the Association of American University Presses, printing books about Christian Higher Education, West Texas History and Christian Living as well as theology.[26] Along with its trade imprint, Leafwood Publishers, the press publishes an average of 36 titles per year. Among its notable authors are Rubel Shelly, Rick Ostrander, Darryl Tippens, Edward Fudge, Larry M. James and Walt McDonald.

On February 26, 2008, ACU announced that all incoming freshman classes would receive a free Apple iPhone or an iPod Touch. This decision was the result of a study to find out the viability of iPhone and iPod for academic purposes. ACU was reported as the first university in the nation to embrace this opportunity to further education through the use of the new generation of smartphone technologies.[30] In February 2009, ACU hosted more than 400 academics and technologists from 31 states and 8 countries for its first ConnectEd Summit[31] on mobile learning. Attendees representing more than 90 schools participated in workshops designed to foster mobile learning programs on their own campuses.

In August 2008,[32] Campus Technology magazine named ACU "Innovator of the Year" in the mobile learning category for this "ACU Connected" initiative. On February 27, 2009, ACU received the award for Institutional Excellence in Information Communications Technology[33] from ACUTA and on March 4, 2009, Alcatel-Lucent named ACU a Dynamic Enterprise Award winner and awarded ACU with its first Analyst Choice Award[34] for its ACU Connected initiative. On June 13, 2009, the New Media Consortium presented ACU with one of three Center of Excellence[35] awards at its annual summer conference for ACU's efforts in mobile learning.

In August 2022 the ACU applied to the US Nuclear Regulatory Commission (NRC) for a construction licence for a molten salt research reactor for which it plans to achieve criticality by December 2025.[36]

Formerly a charter member of the Division I Southland Conference, Abilene Christian joined the Lone Star Conference (LSC) of Division II of the NCAA in 1973, but have since rejoined the Southland Conference as of 2013. In 2007, the conference included 33 ACU current and former student athletes in its 75-member all-sports team commemorating the conference's 75th anniversary.[37] Through 2009, ACU is fourth in NCAA history in team national championships won with 57, trailing Division I schools UCLA, Stanford, and USC, and tied with Division III school Kenyon College.[38]

In 2012 Abilene Christian had received NCAA permission to compete in Division I FCS and was under consideration for reattachment to the Southland Conference.[39] On August 25, Abilene Christian's board of trustees accepted Southland's invitation to rejoin the Conference effective with the start of the 2013 academic year.

The school has a number of student organizations called "social clubs" that are equivalent to a fraternity or sorority on other college campuses; chapters of national Hellenic societies, however, are not permitted. The main goal of these social clubs is to help in service to the surrounding communities and the school itself.[44] Clubs also participate in intramural sports and Sing Song. There are a total of fourteen social clubs for both men and women.[45]