Amersham (/ˈæmərʃəm/ AM-ər-shəm) is a market town and civil parish within the unitary authority of Buckinghamshire, England, in the Chiltern Hills, 27 miles (43 km) northwest of central London, 15 miles (24 km) from Aylesbury and 9 miles (14 km) from High Wycombe. Amersham is part of the London commuter belt.

There are two distinct areas:

Old Amersham occupies the valley floor of the River Misbourne. This is a chalk stream which dries up periodically. The river occupies a valley much larger than it is possible for a river the size of the present River Misbourne to cut, which makes it a misfit stream. The valley floor is at around 100 m (330 ft) OD, and the valley top is at around 165 m (541 ft) OD. It is likely that the valley was formed under conditions akin to those required to form a dry valley. Amersham-on-the-Hill is built on the north side of the Misbourne valley on a small plateau that forms the watershed between the Misbourne and the neighbouring River Chess.

The name “Amersham” is derived from the Old English for ‘Ealhmund’s village (hām)’.[2]

Records date back to pre-Anglo-Saxon times when it was known as Agmodesham, and by the time that the Domesday Book was written, around 1086, it had become known as Elmodesham. Further spelling variations are seen in 1460 as Agmondysham and Amytysham [3]

The Domesday entry is:

Queen Edith was the wife of Edward the Confessor and sister of King Harold, and after her death in 1075, the land passed to William the Conqueror, who granted it to Geoffrey de Mandeville (died c. 1100).

In 1200, his descendant Geoffrey de Mandeville (who became the Earl of Essex in 1213) obtained a charter for Amersham allowing him to hold a Friday market and a fair on 7 and 8 September. In 1613, another charter was granted to Edward, Earl of Bedford, changing the market day to Tuesday, and establishing a statute fair on 19 September.[4]

In 1521, seven Lollard dissenters (William Tylsworth, John Scrivener, Thomas Barnard, James Morden, Robert Rave, Thomas Holmes and Joan Norman) were burned at the stake in Amersham. A memorial to them was built in 1931 and is inscribed as follows: "In the shallow of depression at a spot 100 yards left of this monument seven Protestants, six men and one woman were burned to death at the stake. They died for the principles of religious liberty, for the right to read and interpret the Holy Scriptures and to worship God according to their consciences as revealed through God's Holy Word". The Universal Magazine for September 1749 (p. 139) quotes that 'William Tylesworth' was in fact burnt in 1506, and that Thomas Bernard and James Morden (a labourer), were burnt about two years later.[5]

In 1931, the architect Amyas Connell completed the Grade II-listed art deco house, "High & Over" in Amersham.[7] It has been used as a film location.[8] 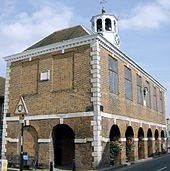 Amersham sent two Members of Parliament (MPs) to the unreformed House of Commons from 1625, and was considered a rotten borough until the Reform Act 1832 stripped it of its representation. The town was then part of the county constituency of Buckinghamshire. From 1885 it was in the Aylesbury constituency, in 1950 it formed part of the South Buckinghamshire seat and in 1974 the current Chesham and Amersham constituency was created. Since then Ian Gilmour (1974–1992) and then Cheryl Gillan (1992–2021) have represented the constituency on behalf of the Conservative party. In the 2019 General Election Ms Gillan was returned with 55.4% of the vote. After her death on 4 April 2021,[9] the seat went to the Liberal Democrats for the first time since its creation when Sarah Green won the ensuing by-election on 17 June 2021.[10]

There are two tiers of local government in Amersham, at parish (town) and county level: Amersham Town Council and Buckinghamshire Council. The town council is based at Flint Barn Court on Church Street in the old town.[11]

The town is located at the junction of the A355 from Slough and Beaconsfield, the A404 linking Maidenhead, High Wycombe and Rickmansworth, the A416 from Chesham and Berkhamsted and the A413.

The area of the town now known as Amersham-on-the-Hill was referred to as Amersham Common until after the arrival of the railway in 1892. After this date the growth of the new area of the town gradually accelerated, with much work being done by the architect John Kennard. It is now known as "Amersham-on-the-Hill", "Amersham Town" or the "New Town". Amersham station is a terminus of the Metropolitan line. Much of this route is shared with the mainline railway from Marylebone to Aylesbury. Before electrification, the Metropolitan line ran via Aylesbury to Verney Junction and Brill. London Transport abandoned plans to electrify beyond Amersham and the stations and line were sold to British Railways on 11 September 1961. To this day, these Chiltern Railways stations display a characteristic Metropolitan line architecture.

The town features in the 1973 John Betjeman documentary Metro-land about the growth of suburban London in the 20th century. The construction of the railway line was controversial and objections from local landowners prevented its construction until 1892. The station was built a mile to the north of the old market town and has provided the focus of Amersham-on-the-Hill ever since.[15] Chiltern Railways share the railway track with London Underground and run services from Marylebone to Aylesbury Vale Parkway.

In March 2010, the Government announced the route of HS2, the proposed high-speed railway from London to Birmingham.[16] The line will cross the Colne Valley and the M25 motorway on a viaduct, and then through a 10-mile (16 km) tunnel under the Chiltern Hills to emerge near South Heath, northwest of Amersham. The route runs roughly parallel to the A413 and the London to Aylesbury Line. A campaign of opposition is co-ordinated by a protest group, Amersham Action Group, which with other protest groups is part of the HS2 Action Alliance.[17]

Early trade at Amersham Market was in local grain, much of which was sold to London merchants. During the 17th century and 18th century a key industry in the town was brewing. Giles Watkins (died 1636) built a brewery near St Mary's church in 1634. His brother Henry Watkins was a royal servant, a page of the robes to Anne of Denmark.[18] William Weller of High Wycombe purchased a brewery in 1775. He, and his heirs, expanded the business by buying a number of local public houses during the next 150 years. In 1929 Gerrard Weller sold the brewery and 133 tied public houses to Benskins of Watford for £360,000, a move that led to the end of brewing in Amersham.[4]

In addition to brewing, tanning, lace manufacture and brickmaking all had a prominent place in the manufacturing past of the town. During the Second World War, the Radiochemical Centre, a scientific research establishment, arrived in the town. This became Amersham International, then Amersham plc, and now, after a number of changes of ownership and name, is part of GE Healthcare.[19] Halma, specialists in hazard and life protection products and headquartered in Old Amersham, is now a member of the FTSE 100 index. 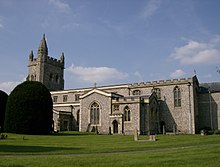 Amersham-on-the-Hill has a free church which is United Reformed and Baptist, the Methodist church St. John's and the Church of England St Michael & All Angels.[citation needed]

In Old Amersham stands the Grade I listed Church of England St Mary's Church, a 13th-century building that has been altered over the years. The present exterior is largely Victorian but the building contains a 14th-century font, 17th century glass from Lamer Manor in Hertfordshire, and monuments in the chancel and in the Drake Chapel to 17th and 18th century notables.[20][21]

Also in the town there is the Grade II* listed Amersham Meeting House (a Quaker meeting house),[22] two Methodist churches, St John's in Woodside Road and another in the High Street,[23] and King's Church Amersham, a free church.[24]

Amersham Golf Club (now defunct) was founded in 1897. The club continued until the onset of the First World War.[26]

Amersham has a King George's Field in memorial to King George V. Near the playing field is the "Chiltern Pools", one of the five venues used by the Amersham Swimming Club.[27] The Chiltern Pools complex also contains the Climb, an indoor climbing wall, unique to the region. Chiltern Pools consists of three swimming pools, including a 25-metre main pool, a fun pool with three water slides and a diving pool with a moveable floor to allow all ages to progress in swimming ability. Chiltern Pools also includes a large gym facility with cardiovascular and weights equipment. Since 2007 a third generation muga with synthetic grass allows all year play.[clarification needed]

Situated also at the Barn Meadow site, (School Lane, Old Amersham) is the 61 Judo Club, a family-orientated, successful and competitive judo club catering for serious and social players alike. It has currently (2020) around 90 active members, and has provided several members of recent British Junior, Senior and Masters squads.

Hervines Park and Barn Meadow host some cricket in the summer, but the main cricket clubs in the town are Amersham Cricket Club, which play in the grounds of Shardeloes, and Amersham Hill Cricket Club. Amersham and Chiltern Rugby Football Club play rugby union at Weedon Lane in Amersham-on-the-Hill. The Chiltern Harriers Athletics Club is the local athletics club. Amersham and Chalfont Hockey Club is the local hockey club with its own playing facility on the Amersham Campus of the Buckinghamshire College Group (formerly Amersham & Wycombe College). The club has around 600 playing members, including one of the largest junior sections in the country.

The Ofcom licenced community radio station for the Chilterns is Chiltern Voice,[30] which broadcasts on 107.4fm.

Due to its position in a fold in the hill, TV and radio reception in Amersham can be poor and the town now has its own TV mast (at Chesham Bois). In the 1970s, Amersham was one of the last towns in the south east to receive BBC2, and parts of it still cannot receive Channel 5. Houses taking their TV reception from the Chesham Bois transmitter[31] have vertically polarised aerials, whilst those in a good enough position receive their signal from the Crystal Palace Transmitter in London with horizontally polarised aerials – they always could receive BBC2 (and indeed Channel 4 & Channel 5). Digital terrestrial television coverage is patchy for much the same reason. Mobile phone reception can be poor in the steeper parts of Chesham and outlying villages.

The town has been used in a number of films, including:

See also: List of twin towns and sister cities in the United Kingdom

Amersham is twinned with: