Creighton University is a private Jesuit research university in Omaha, Nebraska. Founded by the Society of Jesus in 1878, the university is accredited by the Higher Learning Commission. In 2015 the university enrolled 8,393 graduate and undergraduate students on a 140-acre (57 ha)[6] campus just outside Omaha's downtown business district. It is classified among "R2: Doctoral Universities – High research activity".

The university was founded as Creighton College on September 2, 1878, through a gift from Mary Lucretia Creighton, who stipulated in her will that a school be established in memory of her husband, prominent Omaha businessman Edward Creighton. Edward's brother, John A. Creighton, is credited with fostering and sustaining the university's early growth and endowment. In 1958, the college split into Creighton Preparatory Schools and the present-day Creighton University.[7]

The schools and colleges at Creighton are:

The College of Arts & Sciences is the largest school, containing about 28% of the university's enrolled students.[12] Creighton's acceptance rate is 72.7%.[13] 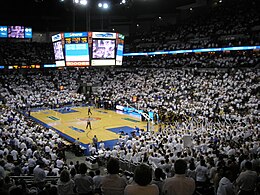 Creighton competes in NCAA Division I athletics as a member of the Big East. Nicknamed the Bluejays, Creighton fields 14 teams in eight sports.

The women's basketball team won the WNIT championship in 2004. It plays all home games on campus at D. J. Sokol Arena.

The men's soccer team maintained 17 straight NCAA tournament appearances between 1992 and 2008. During that time, the Bluejays made three College Cup appearances, including one championship game appearance (2000). It plays all home games on campus at Morrison Stadium.

Creighton's baseball team has one appearance in the College World Series (1991). Jim Hendry, the former general manager of the Chicago Cubs, was Creighton's head coach for its 1991 CWS appearance. The program's graduates include Hall of Fame pitcher Bob Gibson.

The women's softball team has had two appearances in the Women's College World Series (1982 and 1986) and has appeared in six of the past eight NCAA Tournaments. Tara Oltman (2007–2010), the best pitcher in MVC history, was a three-time league Pitcher of the Year and finished her career with conference records for wins, innings pitched, starts, appearances, strikeouts, and complete games. She remains the only student-athlete in Bluejays history to earn first-team all-conference honors in four consecutive seasons. 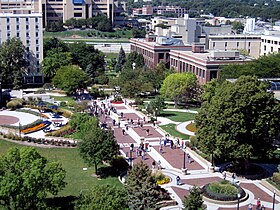 The university has more than 200 student organizations:[18]

There are currently eight halls of residence: Davis Square, Deglman Hall, Heider Hall, Kenefick Hall, Kiewit Hall, McGloin Hall, Opus Hall and Swanson Hall. They are all co-educational. A ninth, currently unnamed residence is (as of January 2022) under construction on 23rd Street, south of Burt Street. Expected to be completed in August 2023, it will be able to accommodate 400 first-year students.[19] It is Creighton's first new residence hall since 2006, and the first built exclusively for first-year students since the 1960s.[20]

Law school with downtown in background

Many organizations allow students to share their common interests.[31] Examples include:

There are more than 68,470 living alumni of Creighton University in 93 countries. Nearly 30 percent live in Nebraska. The largest number of alumni outside the United States reside in Canada, Japan, and Malaysia.[32]