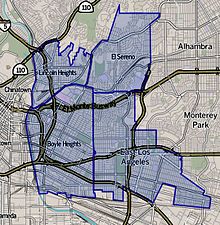 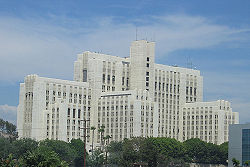 East Los Angeles was founded in 1870 by John Strother Griffin (1816–1898), who was called "the father of East Los Angeles".[1] He was said to have created the first suburb of the city of Los Angeles in Lincoln Heights after he purchased 2,000 acres of ranch land for $1,000 and in 1870, with his nephew, Hancock Johnson, erected houses on the site. That land was a rancho called La Rosa de Castilla, on the east side of the Los Angeles River, taking in the deserted hills between Los Angeles and Pasadena.[citation needed] In late 1874 the two men offered an additional thirty-five acres, divided into 65x165-foot lots, for $150 each.[2][3] They planned the laying out of streets of the present community of East Los Angeles and gifted East Side Park (the present Lincoln Park) to the city of Los Angeles.[3][4]

The Mapping L.A. project of the Los Angeles Times defines the Eastside as comprising Boyle Heights, El Sereno, Lincoln Heights, and East Los Angeles.[5] However, the boundaries are a matter of perennial discussion and debate among the residents of Los Angeles.[6]

The Mapping L.A. definition corresponds to the traditional boundaries, but, beginning in the early 21st century, residents of some of the rapidly gentrifying neighborhoods west of Downtown Los Angeles but on the eastern side of Central Los Angeles, such as Echo Park and Silver Lake, began to refer to their neighborhoods as part of the Eastside.[6] This debate generated some friction, which, according to Ali Modarres, an expert on the geography of Los Angeles from the University of Washington Tacoma, is to be expected because neighborhood names are "full of meaning, nuances, history, cultural and political relationships". Eric Garcetti, the mayor of Los Angeles and a fourth generation resident, is a traditionalist, stating that "true east is east of downtown".[6]

The trend led the Silver Lake Neighborhood Council to declare officially in February 2014 that Silver Lake is not part of the Eastside.[6]

The Sixth Street Viaduct, also known as the Sixth Street Bridge was demolished. Prior to the demolition, Los Angeles mayor Eric Garcetti recorded the rap song "101SlowJam", backed by musicians from Roosevelt High School, and issued it via a video on his own YouTube channel. The public service announcement video advertised the closure of parts of the 101 Freeway to accommodate the demolition of the viaduct.[7][8] 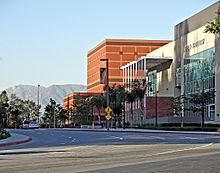 The official East Area Planning Commission area of the City of Los Angeles is divided into the following communities:[9]

The Mapping L.A. project by the Los Angeles Times lists the following City of Los Angeles neighborhoods in its definition of the Eastside:[5]

The following data applies to the boundaries of the Eastside established by Mapping L.A.: 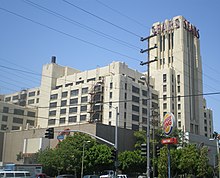