For other uses, see Fano (disambiguation).
Comune in Marche, Italy

Fano [ˈfaːno] is a town and comune of the province of Pesaro and Urbino in the Marche region of Italy. It is a beach resort 12 kilometres (7 miles) southeast of Pesaro, located where the Via Flaminia reaches the Adriatic Sea. It is the third city in the region by population after Ancona and Pesaro.

An ancient town of Marche, it was known as Fanum Fortunae[3] after a temple of Fortuna located there. Its first mention in history dates from 49 BC, when Julius Caesar held it, along with Pisaurum and Ancona. Caesar Augustus established a colonia, and built a wall, some parts of which remain. In 2 AD Augustus also built an arch (which is still standing) at the entrance to the town. 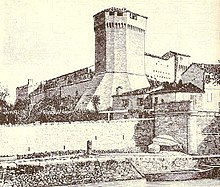 The Castle of Fano in a 19th-century etching. The high watchtower was destroyed during World War II.

In January 271, the Roman Army defeated the Alamanni in the Battle of Fano that took place on the banks of the Metauro river just inland of Fano.

Fano was destroyed by Vitiges' Ostrogoths in AD 538. It was rebuilt by the Byzantines, becoming the capital of the maritime Pentapolis ("Five Cities") that included also Rimini, Pesaro, Senigallia and Ancona. In 754 it was donated to the Holy See by the Frankish kings.

The Malatesta became lords of the city in 1356 with Galeotto I Malatesta, who was nominally only a vicar of the Popes. Among the others, Pandolfo III resided in the city. Under his son, the famous condottiero Sigismondo Pandolfo Malatesta, Fano was besieged by Papal troops under Federico III da Montefeltro, and returned to the Papal administration. It was later part of the short-lived state of Cesare Borgia, and then part of the duchy of the della Roveres in the Marche.

During the Napoleonic Wars it suffered heavy spoliations; the city had an active role in the Risorgimento. In World War I Fano was several times bombed by the Austro-Hungarian Navy. During World War II it was massively bombed by Allied airplanes due to hit the strategic railway and street bridges crossing the Metauro river. When the Nazis withdrew from the town they destroyed all of the bell towers in the town.

Outside the city, in the place called Bellocchi, is the church of St. Sebastian (16th century), for the construction of which parts of the ancient cathedral were used.

Fano is twinned with: