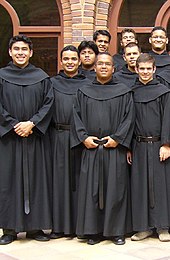 A group of friars; novices of the Order of Augustinian Recollects at the Monastery of Monteagudo in 2006

A friar is a member of one of the mendicant orders founded in the twelfth or thirteenth century; the term distinguishes the mendicants' itinerant apostolic character, exercised broadly under the jurisdiction of a superior general, from the older monastic orders' allegiance to a single monastery formalized by their vow of stability. A friar may be in holy orders or a brother. The most significant orders of friars are the Dominicans, Franciscans, Augustinians, and Carmelites.[1]

Friars are different from monks in that they are called to live the evangelical counsels (vows of poverty, chastity, and obedience) in service to society, rather than through cloistered asceticism and devotion. Whereas monks live in a self-sufficient community, friars work among laypeople and are supported by donations or other charitable support.[2] Monks or nuns make their vows and commit to a particular community in a particular place. Friars commit to a community spread across a wider geographical area known as a province and so they will typically move around, spending time in different houses of the community within their province.

The English term friar is derived from the Norman French word frere (brother), from the Latin frater (brother), which was widely used in the Latin New Testament to refer to members of the Christian community. Fray is sometimes used in Spain and former Spanish colonies such as the Philippines or the American Southwest as a title, such as in Fray Juan de Torquemada.

In the Roman Catholic Church, there are two classes of orders known as friars, or mendicant orders: the four great orders and the so-called lesser orders.

The four great orders were mentioned by the Second Council of Lyons (1274):

Some of the lesser orders are:

In the Sovereign Military Order of Malta the term Fra' (an abbreviation for the Latin word "frater" meaning "brother") is used when addressing the professed Knights of Justice who have taken vows.

Uses by other Christian traditions

Other usage of the term

Several high schools, as well as Providence College, use friars as their school mascot.

The Major League Baseball team San Diego Padres have the Swinging Friar ("padre" is also a Spanish word for the priestly title "father"; in 1769 San Diego was founded by Spanish Franciscan friars under Junípero Serra).

The University of Michigan's oldest a cappella group is a male octet known as The Friars.[7]

The University of Pennsylvania has a senior honor society known as Friars.

Sports teams at Father Dueñas Memorial School on the island of Guam are known as the Friars.