Frogmore Paper Mill is a working paper mill situated in Apsley, Hertfordshire, near Hemel Hempstead. The mill is on an island in the River Gade,[1] which forms part of the Grand Union Canal.[2] It is the oldest mechanical paper mill in the world.[3][4]

There are no surviving records documenting when a mill was first built on the current site, but it is recorded as being a corn mill in 1086 in the Domesday Book.[5] In 1289, the mill was used for fulling; removing oil and other impurities from woolen cloth.[2] It returned to milling grain, then became a fulling mill once more, then finally it become a paper mill by 1774.[5] The world's first mechanised paper machine was installed at Frogmore Mill in 1803 funded by Sealy and Henry Fourdrinier and engineered by Bryan Donkin, based upon a design by Nicolas-Louis Robert. This machine allowed continuous automated production of paper rolls. Unfortunately the £60,000 costs of developing the paper machines meant that the Fourdrinier brothers were bankrupted by 1810.[5][6][7]

For most of the 19th century, the mill was owned by the Grand Junction Canal predecessor of the Grand Union Canal.[2] In 1851, the chemical production of paper from wood (now known as soda pulp), used in newspapers, began at the mill.[5] From 1853 to 1887 the mill was linked to Two Waters Mill, also near Hemel Hempstead.[5][8] In 1890, the British Paper Company was founded and took over operations at the mill; it fully purchased the premises in 1929.[2]

In 2000 the British Paper Company ceased operations and the Apsley Paper Trail was opened to the public.[9] 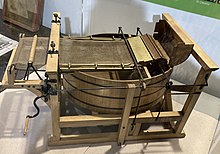 The mill is run by The Apsley Paper Trail, a charitable organisation, and operated as a visitor, education and community use centre. Eleven full-time staff are employed at the mill.[11] It has been used for various theatrical productions, including the rock musical Rent.[3][12]