Hill Street is a major north–south thoroughfare in Los Angeles, measuring 4.8 miles (7.7 km) in length. It starts on Martin Luther King, Jr. Boulevard near the campus of USC, and passes north through Downtown Los Angeles, past such landmarks as Pershing Square, the Subway Terminal Building, Angels Flight,[n 1] Fort Moore and Chinatown. Hill Street merges with the Arroyo Seco Parkway near Dodger Stadium.

East side of Hill between 4th and 5th, 1910s. The large building is the back entrance to the Broadway Department Store. Pacific Electric and Los Angeles Railway dual gauge streetcar tracks are embedded in the road.

Hill Street was originally laid out in 1849 by Edward Ord. At that time, the street ended in the north at 1st Street, where the foot of Fort Hill sat. The stretch of modern Hill Street north of the old hill was originally named Calle del Toro (Bull Street),[1][2][3] was renamed Castelar in 1874,[4] and finally renamed North Hill in 1960.[5]

The Metro B Line and Metro D Line run underneath Hill Street between 1st and 4th Streets and operate the Civic Center and Pershing Square stations along the way. Metro Local lines 2, 4, 10, 28, 81, and 94 run along the surface. The Angels Flight funicular climbs west up Bunker Hill from Hill between 3rd and 4th streets. 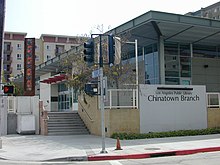 Chinatown Branch Library at the corner of Hill Street and Ord Street, 2008 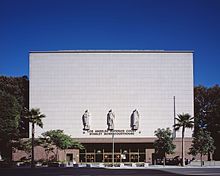 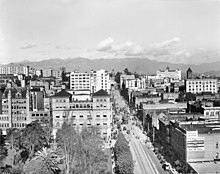