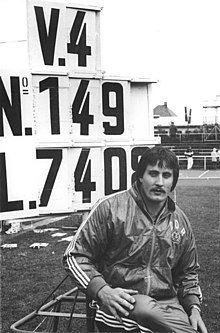 Jürgen Schult beside the indication of his new discus world record, 1986

World records in athletics are ratified by World Athletics. Athletics records comprise the best performances in the sports of track and field, road running and racewalking.

The criteria which must be satisfied for ratification of a world record are defined by World Athletics in Part III of the Competition Rules.[1] These criteria also apply to national or other restricted records and also to performances submitted as qualifying marks for eligibility to compete in major events such as the Olympic Games.

Witnessing a world record brings great pleasure for athletics fans, and athletes' personal sponsors and promoters of major meetings such as the Diamond League and its predecessor, the IAAF Golden League have offered bonuses to athletes breaking a record.

Some middle-distance runners have specialized in acting as pacemakers in longer races, receiving a fee without even finishing the race, and possibly a bonus if a record results. This is a useful occupation for athletes who are capable of running accurately to a specified pace, but not capable of the fastest times to become champions in their own right.

In the pole vault record bonuses create an incentive for an athlete capable of smashing a record to instead break it by the minimum amount (one centimetre), multiple times, at multiple meetings, in order to accumulate multiple bonuses. This has been done by Sergey Bubka in the men's pole vault, and Yelena Isinbayeva in the women's pole vault.[4] Some commentators have complained that neither athlete ever posted as high a mark as they were capable of.[5] In most other disciplines, this issue does not arise, since it is practically impossible to deliberately break a record by a small margin.

World Athletics (then IAAF) commenced the recognition of world records in 1912, and indoor world records after 1987. In 2000, IAAF rule 260.18a (formerly 260.6a) was amended, so that "world records" (as opposed to "indoor world records") can be set in a facility "with or without roof." This rule was not applied retroactively,[6] and has, thus far, only affected the men's and women's pole vault, women's 2,000 m and women's triple jump. The women's vault record has been advanced 9 times indoors by three different women, each ratified as a world record. The last record to be set indoors was in 2004. Sergey Bubka's 1993 pole vault world indoor record of 6.15 m was not considered to be a world record, because it was set before the new rule came into effect. Bubka's world record of 6.14 m, set outdoors in 1994, has been surpassed by five consecutive records set indoors, most recently by Armand Duplantis in 2022 with a 6.20 m (pending) mark. In 2020, Duplantis surpassed Bubka's outdoor world best (the old 6.14 m record), with a 6.15 m vault.

A new IAAF-sanctioned event, the women's 50,000 m walk, does not yet have any recognised world record.

Awaiting ratification   not ratified or later rescinded by World Athletics

Events which do not qualify for World Athletics-ratified world records are typically referred to as world bests.

Some road racing distances and indoor variations of outdoor events fall outside of WA's lists, and records set in uncommon events usually do not adhere to the strict criteria found in WA-ratifiable events: one example is the 150 metres record, which was set by Usain Bolt on a specially-made straight track, while previous performances (such as the Bailey–Johnson 150-metre race) were completed on a traditional circuit which included a partial bend in the track.

The 40-yard dash, a standard acceleration evaluation for American football players, does not fall within the usual criteria of athletics racing events. In most 40-yard dashes, reaction times are not recorded as timing starts only once the player is in motion, and the standards for timing a "football 40" are so lax and inconsistent that a real world record cannot be claimed.

Performances are also hand-timed and calculated to 1/100th of a second, although studies have shown human beings simply cannot react consistently or accurately enough for this to be a valid method, and even those using light beams are timed by the motion of the athlete, removing the normal factor of reaction time; further, football 40-yard dashes are usually run on a turf surface as opposed to an all weather track. All of these factors make track and "football 40" performances essentially impossible to compare.

The world best time for a "football 40" is 4.17 by Deion Sanders, while the extrapolated best for an Olympic-level athlete (including reacting to a starting gun) is 4.24 by Maurice Greene at the 2001 World Championships in Athletics.[103][104] Under conventional football timing on a turf field in 2017, Christian Coleman reportedly ran a 4.12.[105]