Malvin Greston Whitfield (October 11, 1924 – November 19, 2015) was an American athlete, goodwill ambassador, and airman. Nicknamed "Marvelous Mal", he was the Olympic champion in the 800 meters at the 1948 and 1952 Summer Olympics, and a member of the 1948 gold medal team in the 4 × 400 meters relay. Overall, Whitfield was a five-time Olympic medalist (three gold, one silver, one bronze). After his competitive career, he worked for 47 years as a coach, goodwill ambassador, as well as an athletic mentor in Africa on behalf of the United States Information Service.[1]

Whitfield was born in Bay City, Texas. He moved to the Watts district of Los Angeles when he was four; at that age, his father died, and his mother died when he was 12, after which he was raised by his older sister. He sneaked into the Los Angeles Memorial Coliseum during the 1932 Summer Olympic Games, where he watched Eddie Tolan defeat Ralph Metcalfe in the 100 meter race, an event that spurred his own Olympic goals.[1] 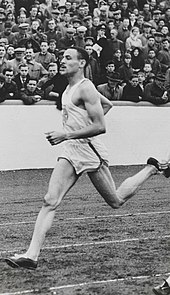 Whitfield at the 1948 Summer Olympics

At the 1948 Olympics in London, Whitfield won the 800 m and was a member of the winning 4 × 400 m relay team. He also earned a bronze medal in the 400 m. At the 1952 Olympics in Helsinki, Finland, he repeated his 800 m victory. He also earned a silver medal as a member of United States 4 × 400 m relay team. He set a world record at 880 yd of 1:49.2 in 1950 and dropped it to 1:48.6 in 1952. In 1954, Whitfield became the first black athlete to win the James E. Sullivan Award, given annually by the Amateur Athletic Union of the United States (AAU) to the outstanding amateur athlete in the country. Whitfield narrowly missed making the 1956 Olympic team while a student at California State University, Los Angeles, and he retired from track competition shortly thereafter.[4]

In his 47 years in Africa, Whitfield trained and gave consultation to dozens of athletes who represented their countries as Olympians and All-Africa Games champions. He coached in 20 countries and lived in Kenya, Uganda and Egypt.[1] Whitfield also arranged sports scholarships for over 5,000 African athletes to study in the United States.[6] During his career as a diplomat, he traveled to over 132 countries and played a key role in training and developing African athletes. United States President Ronald Reagan wrote of him: "Whether flying combat missions over Korea, or winning gold medal after gold medal at the Olympics, or serving as an ambassador of goodwill among the young athletes of Africa, you have given your all. This country is proud of you, and grateful to you." Shortly after his retirement from government service in 1989, Whitfield was invited to the Oval Office, where President George H. W. Bush recognized his service to the nation and the world.[7]

Whitfield wrote the book Learning to Run, which was translated into French.[5][9] His memoir was published by his foundation and titled Beyond the Finish Line.[10]

He was married to Nola Whitfield. He was also the father of Nyna Konishi, Lonnie Whitfield, CNN anchor Fredricka Whitfield[11] and accomplished high jumper Ed Wright.[12] In 1989 Whitfield founded the Mal Whitfield Foundation for the promotion of sports, academics, and culture. The foundation has distributed 5,000 athletic scholarships.[13]

Whitfield died at a Department of Veterans Affairs hospice center in Washington, D.C. on the night of November 19, 2015, aged 91.[14] He was interred at Arlington National Cemetery.[2]