Noah Lyles (born July 18, 1997) is an American professional track and field sprinter competing in the 100 meters and 200 meters. He is the 2020 Tokyo Olympic 200 m bronze medalist and a two-time World champion, having won the event at the 2019 and 2022 World Athletics Championships. At these Championships Lyles also earned gold and silver medal in the 4 × 100 m relay respectively. He holds personal bests of 9.86 seconds for the 100 m and 19.31 seconds for the 200 m, the latter being an American record making him the third fastest on the respective world all-time list.

Lyles had committed to compete for the Florida Gators at the University of Florida, but in July 2016, Noah and his younger brother Josephus instead turned professional and signed with adidas.[3][17] In November 2016, Lyles was again named high school boys athlete of the year for 2016 by Track & Field News.

Lyles started 2017 with his first senior national title in the 300 m at the 2017 USA Indoor Championships in the thin air of Albuquerque, New Mexico, improving the indoor world record by one hundredth of a second to 31.87 s.[18][19] He earned a silver medal in the 4 × 200-meter relay with team USA at the 2017 World Relays. Lyles won two meets in the 2017 IAAF Diamond League circuit, winning the final ahead of American champion Ameer Webb and world champion Ramil Guliyev. However, injuries prevented him from competing much of the season and he missed the 2017 World Championships as a result. 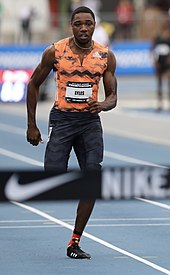 Lyles returned to Albuquerque to compete at the 2018 USA Indoor Championships, but in the 60-meter dash instead of the 300 m. He made it through his first heat while equaling his personal best time of 6.57 s, but failed to advance through his semi-final. Having failed to make the national team for the 2018 World Indoor Championships, he turned his focus to preparing for the outdoor season. He opened with a win in the 200 m at the IAAF Diamond League Doha meet, setting a new personal best with a time of 19.83 s. A few weeks later he ran the less common 150 m at the adidas Boston Games, winning in a personal best time of 14.77 s.[20] He returned to the 200 m at the IAAF Diamond League in Eugene, winning and improving his personal best time to 19.69 s. This time matched the world leading time set by Clarence Munyai earlier that year.[21][22]

At the 2018 USA Championships he focused on the 100 m instead, matching the world lead of 9.89 s in the semi-final. Mike Rodgers had set the world lead a day before in a separate heat, but he did not start in the semi-finals. This left Lyles' primary rival to be Ronnie Baker, who had run the 100 m in 9.78 s at the Prefontaine Classic earlier that year, but with a wind velocity just over the allowable limit for record purposes (+2.4 m/s).[21] In the final Baker got out a few meters ahead of Lyles out of the blocks, but Lyles started to come back halfway through the race and just passed Baker in the last meter to win in 9.88 s, a new world lead and personal best time for Lyles.[23][24] He became the youngest U.S. champion in the 100 m since Sam Graddy won in 1984.[25]

Lyles world lead in the 100 m would later be beaten by Baker (9.87 s) and then Christian Coleman (9.79 s), but at the Herculis IAAF Diamond League meet in Monaco Lyles set a new 200 m world lead and personal best time in 19.65 s. The time placed him in the top-10 fastest men in the 200 m of all time.[26][27] Before that Lyles equaled his personal best and world lead at the Athletissima IAAF Diamond League meet to win a greatly anticipated showdown against Michael Norman, who had set the indoor world record in the 400-meter dash earlier that year.[22][28][29] Lyles went into the IAAF Diamond League final, the Weltklasse Zürich, as the favorite. He was again matched up against world champion Ramil Guliyev who recently also become European champion, setting a personal best of 19.76 s in the process.[30] The two were placed in adjacent lanes and ran evenly through the bend, but Lyles started to pull away on the straight and finished in 19.67 s.[31] It was his fourth time under 19.70 s in the same season. Only one other individual has been under 19.70 s four times in a career, world record holder Usain Bolt who also did it four times during his record-breaking 2009 season.[32]

On August 4, 2021, Lyles won a bronze medal at the 2020 Tokyo Olympics in the 200-meter men's final with a time of 19.74 seconds, equalling his season's best from the U.S. Olympic Trials earlier that year. He followed this Olympic performance with a 19.52 (+1.5) in Eugene, Oregon on August 21, which was his second best performance and the ninth fastest 200 m mark in history.

On July 21, 2022, during the World Athletics Championships on home soil in Eugene, Oregon, Lyles claimed his second global title in the 200 m and surpassed Michael Johnson's long standing record of 19.32 by running 19.31, which moved him to third on the world all-time list.[35] He capped his fine season in the Zürich Diamond League final with victory in 200 m, securing his fourth Diamond Trophy over the distance and fifth overall. Lyles was undefeated in his specialist event that year, breaking 20 seconds in all 12 of his races, including heats and finals.[36]

Lyles at the 2020 Gyulai István Memorial in Székesfehérvár, Hungary