Home > Roald > Bio
College in Virginia, United States
Not to be confused with Virginia Polytechnic Institute and State University. 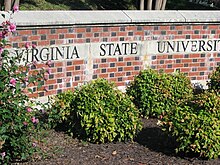 Virginia State University was founded on March 6, 1882, when the legislature passed a bill to charter the Virginia Normal and Collegiate Institute. The bill was sponsored by Delegate Alfred W. Harris, a Black attorney whose offices were in Petersburg, but who lived in and represented Dinwiddie County in the General Assembly. A hostile lawsuit delayed opening day for nineteen months, until October 1, 1883. In 1902, the legislature revised the charter act to curtail the collegiate program and to change the name to Virginia Normal and Industrial Institute.

The university is situated in Chesterfield County at Ettrick, on a bluff across the Appomattox River from the city of Petersburg. It is accessible via Interstate Highways 95 and 85, which meet in Petersburg.

The first person to bear the title of President, John Mercer Langston, was one of the best-known Black men of his day. Until 1992, he was the only Black man ever elected to the United States Congress from Virginia (elected in 1888), and he was the great-uncle of the famed writer Langston Hughes. From 1888 to 1968, four presidents – James H. Johnston, John M. Gandy, Luther H. Foster, Robert P. Daniel served an average of 20 years, helping the school to overcome adversity and move forward. The next twenty years, 1968–1992, saw six more presidents—James F. Tucker, Wendell P. Russell, Walker H. Quarles, Jr., Thomas M. Law, Wilbert Greenfield, and Wesley Cornelious McClure. On June 1, 1993, Eddie N. Moore, Jr., the former Treasurer of the Commonwealth of Virginia, became the twelfth President of Virginia State University. Dr. Keith T. Miller became Virginia State University's 13th president from 2010 to 2014. In 2015, Dr. Pamela V. Hammond became the first woman to lead Virginia State University in 133 years. She was appointed as interim president on January 1, 2015. On February 1, 2016, President Makola Abdullah, Ph.D., was named as the 14th president of Virginia State University. Dr. Abdullah previously served as provost and senior vice president at Bethune-Cookman University in Daytona Beach, Fla. President Abdullah is a Chicago native who is the youngest African American to receive a Ph.D. in engineering. He earned his undergraduate degree from Howard University in civil engineering and a Master of Science in civil engineering from Northwestern University.

In 2020, MacKenzie Scott donated $30 million to Virginia State. Her donation is the largest single gift in Virginia State's history.[3] 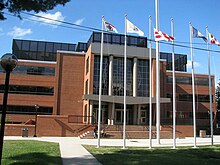 The university has a 231-acre (0.93 km2) main campus and a 412-acre (1.67 km2) agricultural research facility known as the Randolph Farm. The main campus includes more than 50 buildings, including 11 dormitories and 18 academic buildings. The main campus is located close to the Appomattox River in Ettrick, Virginia.[4] 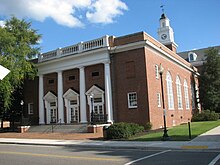 This is a list of the departments within each college:[6]

There are over 70 student organizations on campus.[8]

The famed “Marching 110,” was built during the leadership of Dr. F. Nathaniel Pops Gatlin and Dr. Claiborne T. Richardson. In 1984 the marching band was renamed the “Trojan Explosion” under the direction of Harold J. Haughton, Sr. and the music department began to grow. In 2013, Professor James Holden, Jr. became Director of Bands. In addition to serving as director of the world renowned VSU Gospel Chorale, Holden has served as assistant director of Bands since 1984. Arguably one of the top arrangers in the country, Holden is known throughout the musical world as an exquisite saxophonist.

The renowned Trojan Explosion Marching Band is a captivating show style band executing high intensity, musicality and showmanship on and off the field. The Trojan Explosion has been selected to attend the Honda Battle of the Bands 9 consecutive years. In addition to numerous accolades and achievements, the drum line performed at the White House for President Barack Obama during the signing of the HBCU Funding Bill. The Trojan Explosion don blue and orange for home games and blue, orange and white for away games.

Originally led by head coach Paulette Johnson, for 35 years, the Woo Woos are a nationally recognized cheerleading squad known for original, up-tempo and high energy performances. The 30 member squad is composed of young women from all over the country. The squad focuses on community service as well as promoting school spirit. Tryouts are held annually during the spring semester for VSU full-time students. Instructional camps and workshops are offered throughout the state.

In 2001, the university granted the Woo Woo Alumni chapter its initial charter. The organization has a rapidly growing membership that is actively involved in the promotion of the squad and its individual members. Shandra Claiborne, a former Woo Woo, led the team for one year following the retirement of Johnson. The squad has been under the leadership of former Woo Woo Cassandra Artis-Williams since 2013.

The Department of Music had a recording Concert Choir. In 1974, This choir recorded an album entitled The Undine Smith Moore Song Book a recording in the series of Afro-American heritage in songs.[9] This recording was third in the series, which aspired to produce a recording each year of the works of this Black composer who was a former faculty member and co-director of the Black Man in American Music Center.[9] The choir also performed selections from this series in Baltimore at Bethel AME Church," including songs from a group of gospel selections arranged by VSC students Larry Bland, Janet Coleman, and Roger Holliman."[9] Several graduates of VSC were living in Baltimore, and came to join the choir at the end of the program as they sang the Evening Song. 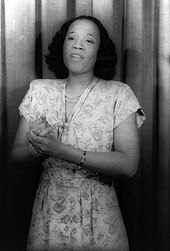 Alumna Camilla Williams, the first African American to get a contract from a major American opera company (namesake of Taylor-Williams Hall at the university)