The 1960 Summer Olympics (Italian: Giochi Olimpici estivi del 1960), officially known as the Games of the XVII Olympiad (Italian: Giochi della XVII Olimpiade) and commonly known as Rome 1960 (Italian: Roma 1960), were an international multi-sport event held from 25 August to 11 September 1960 in Rome, Italy. Rome had previously been awarded the administration of the 1908 Summer Olympics, but following the eruption of Mount Vesuvius in 1906, the city had no choice but to decline and pass the honour to London. The Soviet Union won the most gold and overall medals at the 1960 Games.

On 15 June 1955, at the 50th IOC Session in Paris, France, Rome won the rights to host the 1960 Games, having beaten Brussels, Mexico City, Tokyo, Detroit, Budapest and finally Lausanne. Tokyo and Mexico City would subsequently host the proceeding 1964 and 1968 Summer Olympics respectively.[2]

Toronto was initially interested in the bidding, but appears to have dropped out during the final phase of the bid process.[3] This was the first of five unsuccessful attempts by Toronto to secure the Summer Olympics from then until the 2008 games.

The Olympic Torch of Rome 1960 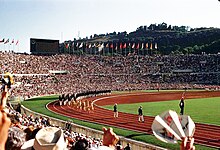 A total of 83 nations participated at the Rome Games. Athletes from Morocco, San Marino, Sudan, and Tunisia competed at the Olympic Games for the first time. Athletes from Barbados, Jamaica and Trinidad and Tobago would represent the new (British) West Indies Federation, competing as "Antilles", but this nation would only exist for this single Olympiad. Athletes from Northern Rhodesia and Southern Rhodesia competed under the Rhodesia name while representing the Federation of Rhodesia and Nyasaland. Athletes from East Germany and West Germany would compete as the United Team of Germany from 1956 to 1964. Athletes from the People's Republic of China last competed at the 1952 Summer Games but had since withdrawn from the IOC due to a dispute with the Republic of China over the right to represent China.[10] The number in parentheses indicates the number of participants that each country contributed.

The 1960 Summer Olympics featured 17 different sports encompassing 23 disciplines, and medals were awarded in 150 events. In the list below, the number of events in each discipline is noted in parentheses.

All dates are in Central European Time (UTC+1)