The 1964 Summer Olympics (Japanese: 1964年夏季オリンピック, Hepburn: 1964-Nen Kaki Orinpikku), officially the Games of the XVIII Olympiad (Japanese: 第18回オリンピック競技大会, Hepburn: Dai Jūhachi-kai Orinpikku Kyōgi Taikai) and commonly known as Tokyo 1964 (Japanese: 東京1964), were an international multi-sport event held from 10 to 24 October 1964 in Tokyo, Japan. Tokyo had been awarded the organization of the 1940 Summer Olympics, but this honor was subsequently passed to Helsinki due to Japan's invasion of China, before ultimately being cancelled due to World War II. Tokyo was chosen as the host city during the 55th IOC Session in West Germany on 26 May 1959.

The 1964 Summer Games were the first Olympics held in Asia, and marked the first time South Africa was excluded due to the use of its apartheid system in sports.[2][3] Until 1960, South Africa had fielded segregated teams, conforming to the country's racial classifications; for the 1964 Games the International Olympic Committee demanded a multi-racial delegation to be sent, and after South Africa refused, they were excluded from participating. The country was, however, allowed to compete at the 1964 Summer Paralympics, also held in Tokyo, its Paralympic Games debut.[4]

The 1964 Games were also the first to be telecast internationally without the need for tapes to be flown overseas, as they had been for the 1960 Olympics four years earlier. The games were telecast to the United States using Syncom 3, the first geostationary communication satellite, and from there to Europe using Relay 1.[5] These were also the first Olympic Games to have color telecasts, albeit partially. Certain events such as the sumo wrestling and judo matches, sports popular in Japan, were tried out using Toshiba's new colour transmission system, but only for the domestic market. The entire 1964 Olympic Games was chronicled in the ground-breaking 1965 sports documentary film Tokyo Olympiad, directed by Kon Ichikawa.

The games were scheduled for mid-October to avoid the city's midsummer heat and humidity and the September typhoon season.[6] The previous Olympics in Rome in 1960 started in late August and experienced hot weather. The following games in 1968 in Mexico City also began in October. The 1964 Olympics were also the last to use a traditional cinder track for the track events. Since 1968, a smooth, synthetic, all-weather track has been used. The United States won the most gold medals, while the Soviet Union won the most overall medals.

Tokyo won the rights to the Games on 26 May 1959 at the 55th IOC Session in Munich, West Germany, over bids from Detroit, Brussels and Vienna.[7]

Toronto was an early bidder again in 1964 after the failed attempt for 1960 and failed to make the final round.[8] 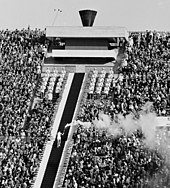 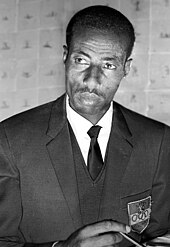 The 1964 Summer Olympics featured 19 different sports encompassing 25 disciplines, and medals were awarded in 163 events. In the list below, the number of events in each discipline is noted in parentheses.

Note: In the Japan Olympic Committee report, sailing is listed as "yachting".[13]

Northern Rhodesia achieved full independence as Zambia on the same day as the closing ceremony. Athletes from Southern Rhodesia competed under the banner of Rhodesia; this was the last of three appearances at the Summer Olympics by a Rhodesian representation. Zimbabwe would later make its first appearance at the 1980 Summer Olympics.[citation needed]

Athletes from East Germany and West Germany competed together as the United Team of Germany, as they had done previously in 1956 and 1960. The nations would enter separate teams beginning with the 1968 Winter Olympics.[citation needed]

Indonesia was banned from the 1964 Olympics, due to its refusal to allow Israeli and Taiwanese athletes visas at the 1962 Asian Games. Indonesia was originally banned on the meeting which took place in Lausanne on 7 February 1963.[34] The decision was changed on 26 June 1964 citing the changed position of the Government of Indonesia towards the Tokyo games.[34]

All dates are in Japan Standard Time (UTC+9)

These games were the first to be telecast internationally. The games were telecast to the United States using Syncom 3,[36] the first geostationary communication satellite, and from there to Europe using Relay 1, an older satellite which allowed only 15–20 minutes of broadcast during each of its orbits.[37][38] Total broadcast time of programs delivered via satellite was 5 hours 41 minutes in the United States, 12 hours 27 minutes in Europe, and 14 hours 18 minutes in Canada. Pictures were received via satellite in the United States, Canada, and 21 countries in Europe.[39] Several broadcasters recorded some sports from Japan and flown over to their countries. While the agreement to use satellite to transmit the games live to the United States was a proud achievement for the American government and Hughes Corporation which developed the satellites, NBC the rights holder had little interest in the project.[40] NBC's participation was due to pressure from the Under-Secretary of State for Political Affairs Averell Harriman, and NBC intended to record the live transmissions for later use in sponsored shows.[40] NBC broadcast the opening ceremonies live on the East coast of the United States, but delayed the broadcast on the West coast to 1:00 a.m. so Johnny Carson's Tonight Show would not be interrupted.[40] When pressed on the issue NBC announced there would be no more live telecasts which angered the American State Department which saw the broadcasts as a matter of national prestige, and also the Hughes Aircraft Company who won the bid to build the satellite system over RCA which owned NBC.[41]

The start of operations for the first Japanese bullet train (the Tokaido Shinkansen) between Tokyo Station and Shin-Ōsaka Station was scheduled to coincide with the Olympic games. The first regularly scheduled train ran on 1 October 1964, just nine days before the opening of the games, transporting passengers 515 kilometers (320 mi) in about four hours, and connecting the three major metropolitan areas of Tokyo, Nagoya, and Osaka.

Some already-planned upgrades to both highways and commuter rail lines were rescheduled for completion in time for these games. Of the eight main expressways approved by the Tokyo Metropolitan Government in 1959, No. 1, No. 4 and a portion of No. 2 and No. 3 were completed for the games. Two subway lines totaling 22 kilometers (14 mi) were also completed in time for the games, and the port of Tokyo facilities were expanded to handle the anticipated traffic.[42]

As a visual aid for foreign visitors to the Games, this Olympics was the first to use pictograms, created by Masasa Katzumie, to represent each event visually. This became a standard visual component of the modern Olympics ever since.[43]

The Oxford Olympics Study established the outturn cost of the Tokyo 1964 Summer Olympics at US$282 million in 2015-dollars.[44] This includes sports-related costs only, that is, (i) operational costs incurred by the organizing committee for the purpose of staging the Games, e.g., expenditures for technology, transportation, workforce, administration, security, catering, ceremonies, and medical services, and (ii) direct capital costs incurred by the host city and country or private investors to build, e.g., the competition venues, the Olympic village, international broadcast center, and media and press center, which are required to host the Games. Indirect capital costs are not included, such as for road, rail, or airport infrastructure, or for hotel upgrades or other business investment incurred in preparation for the Games but not directly related to staging the Games. The cost for Tokyo 1964 compares with costs of US$4.6 billion for Rio 2016, US$40–44 billion for Beijing 2008 and US$51 billion for Sochi 2014, the most expensive Olympics in history. Average cost for Summer Games since 1960 is US$5.2 billion.[citation needed]

The 1964 Summer Olympics in Tokyo celebrated Japan's progress and reemergence on the world stage. The new Japan was no longer a wartime enemy, but a peaceful country that threatened no one, and this transformation was accomplished in fewer than 20 years.[45]

To host such a major event, Tokyo's infrastructure needed to be modernized in time for large numbers of expected tourists. Enormous energy and expense was devoted to upgrading the city's physical infrastructure, including new buildings, highways, stadiums, hotels, airports and trains. There was a new satellite to facilitate live international broadcast. Multiple train and subway lines, a large highway building project, and the Tokaido Shinkansen, the fastest train in the world, were completed. Tokyo International Airport and the Port of Tokyo were modernized. International satellite broadcasting was initiated, and Japan was now connected to the world with a new undersea communications cable.[39] The YS-11, a commercial turboprop plane developed in Japan, was used to transport the Olympic Flame within Japan.[46] For swimming, a new timing system started the clock by the sound of the starter gun and stopped it with touchpads. The photo finish using a photograph with lines on it was introduced to determine the results of sprints. All of this demonstrated that Japan was now part of the first world and a technological leader, and at the same time demonstrated how other countries might modernize.[45] In preparation for the games, 200,000 stray cats and dogs were rounded up and killed.[47]

Unfortunately, however, the construction projects resulted in environmental damage, forced relocations for residents, and loss of industry. In addition, corruption by politicians and construction companies resulted in cost overruns and shoddy work.[47]

Although public opinion about the Olympics in Japan had initially been split, by the time the games started almost everyone was behind them. The broadcast of the opening ceremony was watched by over 70% of the viewing public, and the women's volleyball team's gold medal match was watched by over 80%.[45]

As with many other Olympics, observers later stated that 1964 Olympic preparation and construction projects had had a negative effect on the environment and lower income people.[47]

The Cary Grant film Walk, Don't Run was filmed during the Tokyo Olympics, and set in Tokyo during the Olympics. A message at the beginning of the film thanks the Japanese Government and Tokyo Police for putting up with them filming in crowded Tokyo.

The Studio Ghibli film From Up on Poppy Hill takes place one year before the Tokyo Olympics and refers to the upcoming games. The official poster can be seen several times in the film.

Tokyo attempted to bring the Olympic Games back to the city, having unsuccessfully bid for the 2016 Summer Olympics, which were awarded to Rio de Janeiro. Tokyo was chosen to host the 2020 Summer Olympics and Paralympics games, making it the first Asian city to host the games twice.[48] The worldwide coronavirus pandemic, however, forced the organizers to postpone the games to summer 2021, the first time that an Olympic Games was cancelled or rescheduled during peacetime.

The Japan Society Fall 2019 exhibition, Made in Tokyo: Architecture and Living, 1964/2020, is an architectural exhibition that examines the social, cultural, economic, and political impacts of the 1964 Tokyo Olympics on the modernization of the Tokyo landscape (Homes, Offices, Retail Businesses, Athletic Stadiums, Hotels, and Transportation Stations). The exhibition was curated by the Japanese architectural firm Atelier Bow-Wow.[49]

The majority of Japanese castles were smashed and destroyed in the late 19th century in the Meiji restoration by the Japanese people and government in order to modernize and westernize Japan and break from their past feudal era of the Daimyo and Shoguns. It was only due to the 1964 Olympics in Japan that cheap concrete replicas of those castles were built in preparation for tourists.[50][51][52] The vast majority of castles in Japan today are new replicas made out of concrete.[53][54][55] In 1959 a concrete keep was built for Nagoya castle.[56] 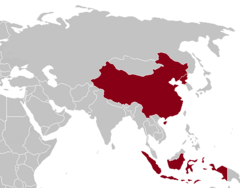 North Korea withdrew its athletes from the 1964 Summer Olympics just before the Games were due to start, as the IOC were refusing to accept any athletes who had participated in the Games of the New Emerging Forces (GANEFO) held in Jakarta, Indonesia, in 1963.[57] China and Indonesia also chose not to attend the Tokyo Games due to GANEFO issues.