The event was overshadowed by the Munich massacre in the second week, in which eleven Israeli athletes and coaches and a West German police officer at Olympic village were killed by Palestinian Black September members. The motivation for the attack was the ongoing Palestinian-Israeli conflict.

The 1972 Summer Olympics were the second Summer Olympics to be held in Germany, after the 1936 Games in Berlin, which had taken place under the Nazi regime, and the most recent Olympics to be held in the country. The West German Government had been eager to have the Munich Olympics present a democratic and optimistic Germany to the world, as shown by the Games' official motto, "Die Heiteren Spiele",[2] or "the cheerful Games".[3] The logo of the Games was a blue solar logo (the "Bright Sun") by Otl Aicher, the designer and director of the visual conception commission.[4] The hostesses wore sky-blue dirndls as a promotion of Bavarian cultural heritage.[5] The Olympic mascot, the dachshund "Waldi", was the first officially named Olympic mascot. The Olympic Fanfare was composed by Herbert Rehbein.[6] The Soviet Union won the most gold and overall medals.

The Olympic Park (Olympiapark) is based on Frei Otto's plans and after the Games became a Munich landmark. The competition sites, designed by architect Günther Behnisch, included the Olympic swimming hall, the Olympics Hall (Olympiahalle, a multipurpose facility) and the Olympic Stadium (Olympiastadion), and an Olympic village very close to the park. The design of the stadium was considered revolutionary, with sweeping canopies of acrylic glass stabilized by metal ropes, used on such a large scale for the first time.[7]

Munich won its Olympic bid on 26 April 1966, at the 64th IOC Session in Rome, Italy, over bids presented by Detroit, Madrid, and Montréal. Montréal would eventually host the following Olympic games in 1976.[9]

The Games were largely overshadowed by what has come to be known as the "Munich massacre". Just before dawn on 5 September, a group of eight members of the Palestinian Black September militiant organization broke into the Olympic Village and took eleven Israeli athletes, coaches and officials hostage in their apartments. Two of the hostages who resisted were killed in the first moments of the break-in; the subsequent standoff in the Olympic Village lasted for almost 18 hours.

Late in the evening of 5 September that same day, the terrorists and their nine remaining hostages were transferred by helicopter to the military airport of Fürstenfeldbruck, ostensibly to board a plane bound for an undetermined Arab country. The German authorities planned to ambush them there, but underestimated the numbers of their opposition and were thus undermanned. During a botched rescue attempt, all of the Israeli hostages were killed. Four of them were shot, then incinerated when one of the terrorists detonated a grenade inside the helicopter in which the hostages were sitting. The 5 remaining hostages were then shot and killed with a machine gun.

"Our worst fears have been realized tonight. They have now said that there were 11 hostages. Two were killed in their rooms, yesterday morning. Nine were killed at the airport, tonight. They’re all gone."

—After a series of conflicting reports and rumours, Jim McKay of ABC brought the news at 3:24 a.m. local time.[10]

All but three of the terrorists were killed as well. Although arrested and imprisoned pending trial, they were released by the West German government on 29 October 1972, in exchange for the hijacked Lufthansa Flight 615. Two of those three were supposedly hunted down and assassinated later by the Mossad.[11] Jamal Al-Gashey, who is believed to be the sole survivor, is still living today in hiding in an unspecified African country with his wife and two children. The Olympic events were suspended several hours after the initial attack for the first time in the modern Olympic Games history, but once the incident was concluded, Avery Brundage, the International Olympic Committee president, declared that "the Games must go on". A memorial ceremony was then held in the Olympic stadium, and the competitions resumed after a stoppage of 34 hours. Due to the suspension, the Games were originally to close on 10 September and had been rescheduled to 11 September.[12] The attack prompted heightened security at subsequent Olympics beginning with the 1976 Winter Olympics. Security at Olympics was heightened further beginning with the 2002 Winter Olympics, as they were the first to take place after the 2001 September 11 attacks.

The massacre led the German federal government to re-examine its anti-terrorism policies, which at the time were dominated by a pacifist approach adopted after World War II. This led to the creation of the elite counter-terrorist unit GSG 9, similar to the British SAS. It also led Israel to launch a campaign known as Operation Wrath of God, in which those suspected of involvement were systematically tracked down and assassinated.

The events of the Munich massacre were chronicled in the Oscar-winning documentary, One Day in September.[13] An account of the aftermath is also dramatized in three films: the 1976 made-for-TV movie 21 Hours at Munich, the 1986 made-for-TV movie Sword of Gideon[14] and Steven Spielberg's 2005 film Munich.[15] In her film 1972, Artist Sarah Morris interviews Dr. Georg Sieber, a former police psychiatrist who advised the Olympics' security team, about the events and aftermath of Black September.[16] 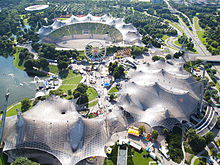 Aerial view of the Olympiapark.

The Oxford Olympics Study established the outturn cost of the Munich 1972 Summer Olympics at US$1.0 billion in 2015-dollars.[23] This includes sports-related costs only, that is, (i) operational costs incurred by the organizing committee for the purpose of staging the Games, e.g., expenditures for technology, transportation, workforce, administration, security, catering, ceremonies, and medical services, and (ii) direct capital costs incurred by the host city and country or private investors to build, e.g., the competition venues, the Olympic village, international broadcast center, and media and press center, which are required to host the Games. Indirect capital costs are not included, such as for road, rail, or airport infrastructure, or for hotel upgrades or other business investment incurred in preparation for the Games but not directly related to staging the Games. The cost for Munich 1972 compares with costs of US$4.6 billion for Rio 2016, US$15 billion for London 2012 (the most costly Summer Olympics to date) and US$21 billion for Sochi 2014 — the most expensive Olympic Games in history.[24] Average cost for Summer Games since 1960 is US$5.2 billion.

The 1972 Summer Olympic programme featured 195 events in the following 21 sports:

Number of competitors per nation.

Rhodesia's invitation to take part in the 1972 Summer Games was withdrawn by the International Olympic Committee four days before the opening ceremony, in response to African countries' (such as Ethiopia and Kenya) protests against the Rhodesian government. (Rhodesia did, however, compete in the 1972 Summer Paralympics, held a little earlier in Heidelberg.)[25][26]

All times are in Central European Time (UTC+1)

‡ No medals were awarded on 5 September as all Olympic competitions were suspended during that day although events that were being held at the time of the suspension were allowed to finish to their conclusion.

Note: The Memorial service was held in the Olympic Stadium on 6 September which was attended by 80,000 spectators and 3,000 athletes. Following this all Olympic competitions were then allowed to resume after a 34 hour suspension.

These are the top ten nations that won medals at the 1972 Games.

The report, titled "Doping in Germany from 1950 to today", details how the West German government helped fund a wide-scale doping program.[27] Doping of West German athletes was prevalent at the Munich Games of 1972.[28]