The City of Chelmsford (/ˈtʃɛlmzfəd/) is a local government district in Essex, England. It is named after its main settlement, Chelmsford, which is also the county town of Essex. On 1 June 2012 Chelmsford was granted city status to mark the Diamond Jubilee of Elizabeth II.[1][2][3] 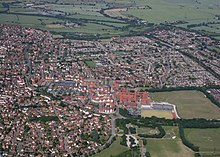 South Woodham Ferrers, the only town in the district

The current district was formed on 1 April 1974 from the borough of Chelmsford, and most of the Chelmsford Rural District.

The borough contains 26 parishes—one town council and 25 parish councils.[5] They are:

Parish without a council

The total population of the area covered by the borough is 157,748 (ONS 2004 estimate). Approximately 60,000 live in the city, and over 42,400 live in the surrounding suburban and semi-rural parishes. Around 16,600 live in South Woodham Ferrers. The remainder of the population live in the surrounding rural areas, including the villages of Galleywood, Bicknacre, East, West and South Hanningfield, Boreham, Ford End, Pleshey, Highwood, Good Easter, High Easter, Chignal St James, Chignal Smealy, Howe Green, Roxwell, Great Leighs, Little Leighs, Broomfield, Great Waltham, Little Waltham, Great Baddow, Little Baddow, Danbury, Sandon, Rettendon, Runwell, Margaretting, Stock and Writtle. (Source: population derived from 2001 census). However, this number is expected to rise dramatically, with 40,000 homes to be built in the metropolitan area of the borough. This could bring the size of Chelmsford up to over 170,000 to be concentrated around Boreham Airfield, Broomfield, North Springfield and Beaulieu Park.

The borough has two major centres, the principal settlement Chelmsford in the centre and the town of South Woodham Ferrers to the south east. The north west of the borough is predominantly rural. Villages are found throughout the borough.

The rail links, both national and international, which run through the borough, are all operated by Abellio Greater Anglia. Two national rail services operate. The Great Eastern Main Line runs through the centre, stopping at Chelmsford railway station. Services via Chelmsford operate between London Liverpool Street and Ipswich, Clacton, Harwich, Braintree or Norwich. The Crouch Valley Line also runs through the far south-east tip of the borough, stopping at South Woodham Ferrers running services between Wickford and Southminster.

The Amsterdam Express, a rail/sea/rail international service owned by also stops in the borough at Chelmsford, connecting the town to the Netherlands, via the North Sea.

There are several primary routes within the borough. One of these, the A12, is also a trunk road and runs from London and the M25, centrally in a north-easterly direction through the borough bypassing the city of Chelmsford onwards to Suffolk and Norfolk. Two other significant primary routes are the A130 which runs north-south across Essex and the A414, which begins as a primary route in Chelmsford but its terminus us Maldon in Essex. The A414 then runs west through Essex, meets the M11 and then its path continues into Hertfordshire via Harlow. Various other A- and B-Roads connect the borough, especially the city of Chelmsford to the rest of the county and beyond.

There is, additionally, a large integrated bus network provided primarily by First Essex which connects the city to towns and villages across the county. Other smaller operators also provide services, such as Stephensons of Essex and Arriva Essex.

Educational establishments in the borough include:

Henry VIII's former Palace of Beaulieu is situated in Boreham, now occupied by the New Hall School. Also located in the borough include the RHS Garden, Hyde Hall at Rettendon, and numerous open spaces in Chelmsford, including Admirals and Central Parks. Writtle, where Robert the Bruce is said to have married his second wife Elizabeth de Burgh in 1302, has English Royal connections, with King John building a hunting lodge there in 1211. Much of the site now lies within the grounds of Writtle College, the internationally famous centre for horticulture and agriculture. A few miles away is the village of Pleshey, where stand the ruins of a once important castle mentioned in William Shakespeare's play Richard II. The entire circuit of the castle walls can still be traced in the village streets. American tourists often visit the village of Springfield, Essex, the origin of "Springfield" as a popular place name, first giving its name to the important City of Springfield, Massachusetts, and subsequently Springfield, Illinois, the state capital of Illinois, and Springfield, Missouri, among numerous others.

Freedom of the City

The following people and military units have received the Freedom of the City of Chelmsford.