A county seat is an administrative center, seat of government, or capital city of a county or civil parish. The term is in use in Canada, China, Hungary, Romania, Taiwan, and the United States. The equivalent term shire town is used in the US state of Vermont and in some other English-speaking jurisdictions.[1] County towns have a similar function in the Republic of Ireland and the United Kingdom, as well as historically in Jamaica. 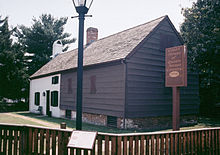 In most of the United States, counties are the political subdivisions of a state. The city, town, or populated place that houses county government is known as the seat of its respective county. Generally, the county legislature, county courthouse, sheriff's department headquarters, hall of records, jail and correctional facility are located in the county seat, though some functions (such as highway maintenance, which usually requires a large garage for vehicles, along with asphalt and salt storage facilities) may also be located or conducted in other parts of the county, especially if it is geographically large.

The provinces of Ontario, Quebec, New Brunswick, Prince Edward Island, and Nova Scotia have counties as an administrative division of government below the provincial level, and thus county seats.[citation needed]

In the provinces of Prince Edward Island, New Brunswick, and Nova Scotia the term "shire town" is used in place of county seat.[citation needed]

County seats in China are the administrative centers of the counties in the People's Republic of China.

Xian have existed since the Warring States period and were set up nationwide by the Qin dynasty.[3][4] The number of counties in China proper gradually increased from dynasty to dynasty. As Qin Shi Huang reorganized the counties after his unification, there were about 1,000. Under the Eastern Han dynasty, the number of counties increased to above 1,000. About 1400 existed when the Sui dynasty abolished the commandery level (郡 jùn), which was the level just above counties, and demoted some commanderies to counties.

In Imperial China, the county was a significant administrative unit because it marked the lowest level of the imperial bureaucratic structure;[5] in other words, it was the lowest level that the government reached. Government below the county level was often undertaken through informal non-bureaucratic means, varying between dynasties. The head of a county was the magistrate, who oversaw both the day-to-day operations of the county as well as civil and criminal cases.

The current number of counties mostly resembled that of the later years of Qing Dynasty. Changes of location and names of counties in Chinese history have been a major field of research in Chinese historical geography, especially from the 1960s to the 1980s. There are 1,355 counties in Mainland China out of a total of 2,851 county-level divisions. 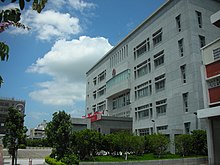 Miaoli City is the county seat of Miaoli County.

In Taiwan, the first counties were first established in 1661 by the Kingdom of Tungning. The later ruler Qing empire inherited this type of administrative divisions. With the increase of Han Chinese population in Taiwan, the number of counties also grew by time. By the end of Qing era, there were 11 counties in Taiwan. Protestant missionaries in China first romanized the term as hien.[6] When Taiwan became a Japanese colony in 1895, the hierarchy of divisions also incorporated into the Japanese system in the period when Taiwan was under Japanese rule. By September 1945, Taiwan was divided into 8 prefectures (州 and 廳), which remained after the Republic of China took over.

Currently there are 13 county seats in Taiwan, which are in the forms of county-administered city, urban township or rural township. 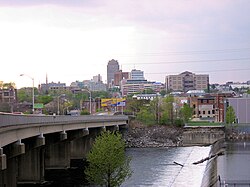 Allentown, Pennsylvania, the third largest city in Pennsylvania and county seat of Lehigh County, May 2010 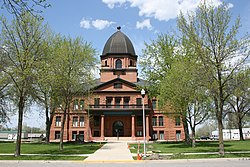 Many county seats in the United States feature a historic courthouse, such as this one in Renville County, Minnesota, pictured in May 2015.

In the United States, a county is an administrative or political subdivision of a state that consists of a geographic region with specific boundaries and usually some level of governmental authority.[7]

U.S. counties with more than one county seat

Most counties have only one county seat. However, some counties in Alabama, Arkansas, Georgia, Iowa, Kentucky, Massachusetts, Mississippi, Missouri, New Hampshire, New York, and Vermont have two or more county seats, usually located on opposite sides of the county. An example is Harrison County, Mississippi, which lists both Biloxi and Gulfport as county seats, and Hinds County, Mississippi, which lists both Raymond and the state capital of Jackson. The practice of multiple county seat towns dates from the days when travel was difficult. There have been few efforts to eliminate the two-seat arrangement, since a county seat is a source of pride (and jobs) for the towns involved.

There are 36 counties with multiple county seats (no more than two each) in 11 states:

In New England, counties have served mainly as dividing lines for the states' judicial systems. Connecticut (since 1960) and Rhode Island have no county level of government and thus no county seats, and Massachusetts has dissolved many but not all of its county governments. In Vermont, Massachusetts,[9] and Maine[10] county government consists only of a Superior Court and Sheriff (as an officer of the court), both located in a designated "shire town." Bennington County, Vermont has two shire towns; the court for "North Shire" is in the shire town Manchester, and the Sheriff for the county and court for "South Shire" are in the shire town Bennington.

As well, Bedford was an independent city from 1968 to 2013, while also being the county seat of Bedford County. Bedford reverted to an incorporated town, and remains the county seat, though is now part of the county.

Two counties in South Dakota (Oglala Lakota and Todd) have their county seat and government services centered in a neighboring county. Their county-level services are provided by Fall River County and Tripp County, respectively.[11]

In Louisiana, which is divided into parishes rather than counties, county seats are referred to as parish seats.

Alaska is divided into boroughs rather than counties; the county seat in these case is referred to as the "borough seat"; this includes six consolidated city-borough governments (one of which is styled as a "municipality"). The Unorganized Borough, Alaska, which covers 49% of the state's area, has no borough government or borough seat.