The East of England Ambulance Service NHS Trust (EEAST) is an NHS trust responsible for providing National Health Service (NHS) ambulance services in the counties of Bedfordshire, Cambridgeshire, Essex, Hertfordshire, Norfolk and Suffolk, in the East of England region. These consist of approximately 6.2 million people across an area of 7,500 square miles (19,000 km2).

It is one of ten ambulance services trusts providing England with emergency medical services, and is part of the NHS, receiving direct government funding for its role.

As well as providing an emergency ambulance service, the trust also provides non emergency patient transport services, commercial services and special operations such as emergency planning, and hazardous materials incident response.[4] The service also support a number of emergency charities, such as air ambulances, who provide doctors for serious incidents.

The East Anglian Ambulance NHS Trust had been formed in 1994 from the three-way merger of Cambridgeshire, Norfolk and Suffolk Ambulance Services.[6]

In 2009, the trust was censured by the Care Quality Commission (CQC) after inspection of an ambulance depot and seven of its 100 ambulance stations found patient-carrying vehicles were "dirty" and that staff were "unsure of basic measures for infection prevention and control". The service launched an "urgent and comprehensive review" of its ambulance cleaning programme and reiterated its stance on patient safety, adding that "ensuring consistent high standards of cleanliness is a challenge" with so many stations, covering six counties and an area of 7,500 square-miles.[7]

As of July 2016, the trust has the following resources in operation:[9]

EEAST has 90 stations[10][11] spread across the six counties the trust covers. Each station can house a mixture of accident and emergency vehicles, RRVs and patient transport services vehicles. The station has facilities for staff to rest, prepare ambulances and restock consumable medical equipment. Some of the larger stations are known as make ready stations or hub stations which house a team of make ready operatives who clean, fuel, restock, maintain and care for frontline accident and emergency ambulances. The larger stations also have the ability to house the resistance teams, which comprise Class C or C1 vehicles laden with equipment for response to major incidents.

The trust also utilises response posts across its service area, which house restrooms, kitchen and seating areas, allowing the control centres to strategically stage crews across towns and cities to allow for better response times. Some response posts consist of small rented industrial units spread out across a city, or reserved spots in large commercial areas or other service buildings such as fire stations.

Helicopters from the East Anglian Air Ambulance are based in Cambridge and Norwich. 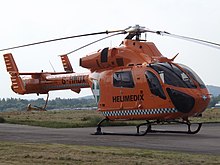 Magpas Air Ambulance is based at RAF Wyton.

The trust used exclusively the Mercedes-Benz Sprinter as front-line double staffed ambulances (DSA), with the exception of a single Vauxhall Movano four-wheel drive vehicle for use at Newmarket Racecourse. In 2009, the service started the transition to a brand-new Sprinter only fleet from a wide range of other brands – including Ford, Vauxhall and older Mercedes-Benz vehicles. The scheme was finished in 2016, when the last brand-new Sprinter was delivered, although many of the older ones are now ending their cycle life. In March 2018, four new vehicles were trialled across the East of England, with one concept vehicle being designed exclusively for and by the trust.

In May 2018, the trust bought 32 five-year-old Fiat Ducato vehicles decommissioned by the West Midlands Ambulance Service – described as "clapped out vehicles which colleagues in other trusts would have sent to the scrapyard" and contrasted with the luxury cars with which senior managers were provided in 2017.[12]

In 2019, the trust began rolling out the new, lightweight box body Fiat Ducato ambulances across the trust, and therefore Mercedes Sprinter ambulances are gradually being replaced. Ninety-four staff were identified as being unable to drive the vehicles, mostly because they were too tall.[13]

The trust provides a patient transport service (Rated "Requires Improvement[14]") bringing patients to and from the regions hospitals and healthcare services in a range of capacities from outpatients to renal patients, as well as discharges from wards and emergency departments. 2015 saw a new fleet of Citroen Relay, Fiat Ducato and Peugeot Boxer vans brought into the trust along with some of its older Renault vehicles which remain in use for bariatric transport. The new vehicles have the ability to carry a number of patients at a time or have the capability to lock a wheelchair in place or accept a Ferno Stretcher. A number of these vehicles are fitted with blue lights and sirens for use in major incidents. Contrary to popular belief these vehicles are rarely used for high dependency transfers, a job which is performed by the Emergency Operations side of the trust or a contracted charity (e.g. St John Ambulance England) or private company.

The trust provides critical care paramedics (CCPs) to three local charity air ambulances in the region: Magpas, Essex & Herts Air Ambulance and the East Anglian Air Ambulance. These paramedics work alongside doctors, who are seconded from NHS hospitals, to administer advanced treatment at the scene of the accident. Although the service uses the air ambulances, it does not fund the charities.

The tactical operations centre (TOC) has regional oversight of all calls, resources and system pressures. They have oversight of the trust 'surge' levels, vehicle out of service time and hospital delays. They are responsible for effective escalation of extended hospital handover delays to the senior management, integrated care boards and NHS England. The tactical operations centre also houses the critical care desk (CCD), who are responsible for the allocation and dispatch of the HEMS teams and house the incident command desk supervisor who is responsible for the allocation and dispatch of resilience assets and staff, such as the HART team and NILOs and the handling of any critical or major incident.

Staff roles in the department:

The trust took over patient transport services in Hertfordshire and Bedfordshire in February 2018, after the private provider, Private Ambulance Service went into administration. A two-year contract was awarded on an emergency basis.[15]

In 2013/14, the trust missed all of its targets in Cambridgeshire and Peterborough. 73.6% of "red 1 calls" for immediately life-threatening situations were met within eight minutes against a target of 75%. 69.4% of "red 2 calls", which may be life-threatening but less time critical were responded to within eight minutes against a 75% target. In north Norfolk, rapid responses during one month were as low as 25%.[16] According to the Clinical Commissioning Group performance had "deteriorated overall in comparison to prior year at both regional and local level".[17] In August 2014, the trust was fined £1.2 million over these failures. It was also fined £300,000 over turnaround times at hospitals. The fines were accrued between April and July 2014. EEAST, which handles more than 900,000 emergency 999 calls a year, said it was recruiting hundreds of new staff and investing in new ambulances.[18] In a statement in November 2014, chief executive Anthony Marsh blamed EEAST's continued failure to meet its emergency response time targets on a lack of staff. Acknowledging that the service was still "not good enough” he said that "significant progress" had been made; 536 student paramedics and a further 69 graduate and qualified paramedics and emergency medical technicians had been recruited since January 2014.[16]

In October 2014, EEAST apologised after claims were published in a local newspaper that a body had been left lying next to dustbins at its station in Ely, Cambridgeshire the previous month. Chief executive Anthony Marsh said the trust was "very sorry for what happened" and had started a "thorough investigation". An EEAST spokesman confirmed the investigation involved "the transportation of a deceased patient", but said he could not comment further as inquiries were ongoing. The newspaper which published the claims said it had done so after being approached by a whistleblower.[19]

The trust was accused of putting patient safety at risk in July 2017 because of a “fixation” with hitting response time targets, using a practice referred to as “stopping the clock” - sending a rapid response vehicle to a call within the target time, leaving the patient to wait longer for the arrival of an ambulance.[20]

Delays, according to a whistleblower, led to the deaths of at least 19 patients and serious harm to 21 more during January 2018. A patient taken to the Norfolk and Norwich University Hospital, had to wait in the back of the ambulance that took him there for 4.5 hours before being seen by a doctor inside the building.[21] A summit was held with NHS England and NHS Improvement in January 2018. It was announced that it would “take steps to improve staff availability at peak times, including action to improve staff health through flu vaccination and reviewing the trust's leave policy” and that it would hire extra vehicles.[22] The trust directors were accused by Norman Lamb of misleading MPs after a meeting about these allegations and several MPs said they had no confidence in the trust's leadership.[23]

The trust is one of the poorest performing in England on most urgent response times and is considering employing military drivers and volunteer drivers due to staff shortages.[24] Proposals made in August 2018 to restrict staff holiday leave between 12 November and 12 January were greeted with a storm of protest.[25] The trust decided controversially sometimes to ask one ambulance to deal with two patients. A senior trust paramedic stated, “It's desperate. I’ve never heard anything like this. A paramedic might have a clinically stable patient on board but if that patient then becomes unstable and you're sitting on scene with perhaps two unstable patients, what do you do? Do you separate one of them from the equipment? Who do you pick?”[26]

In 2018, the trust said it would need 100 more paramedics to meet the new ambulance performance standards. This could cost £5M a year.[27] The Midlands and East regional director of NHS England expressed concern in November 2018 that the trust was prioritising category-4 calls in order to meet its targets, at the expense of more clinically urgent patients,[28] and that the trust's winter plan was inadequate.

In September 2020 the CQC criticised the poor leadership of the trust for fostering bullying and not acting decisively on allegations of predatory sexual behaviour towards patients.[29] It was required by the Equality and Human Rights Commission to sign a legally-binding agreement stating how it will protect its staff from sexual harassment in April 2021.[30]

In 2019, the CQC reported that ambulance services were relying on private providers because of lack of capacity. The trust spent £9.5M on private ambulances for 999 and non-urgent work in 2018/19, double the amount spent previous year.[31]

In 2019, the trust disbanded its health and wellbeing service and outsourced the occupational health function to a new supplier, Kays Medical.[32]