Elsenfeld is a market community in the Miltenberg district in the Regierungsbezirk of Lower Franconia (Unterfranken) in Bavaria, Germany. It is located on the river Main between the hills of the Spessart, east of the river, and Odenwald, west of the river. Elsenfeld has a total population of around 9,000.

Elsenfeld lies in the "Bavarian Lower Main Region" (Bayerischer Untermain) on the Main's right bank. Running through the community is the brook Elsava, which empties into the Main at Elsenfeld.

The name Elsenfeld comes from the brook's name, Elsava, and means "Flowing Water on the Alder Ground". Until the late 17th century, the place was named Elsaffen or Elsava. The name Elsenfeld is only confirmed as far back as 1625.

The area around Elsenfeld was already settled more than 5,000 years ago. This is witnessed by Linear Pottery culture (Bronze Age) burial finds near Eichelsbach and Rück-Schippach. However, there likely was no continuous habitation before Frankish times.

Barrows near Eichelsbach bear witness to a relatively dense population in the time between 1600 and 700 BC. Only in the late 6th century AD did the actual era of written history begin here.

The oldest settlements in today's municipal area are Eichelsbach and Schippach. In 1122, Elsenfeld had its first documentary mention. Schippach's first documentary mention came in 1233, when the Count and Countess of Rieneck expanded the Himmelthal Monastery's landholdings with estates around Schippach. Rück came to light for the first time about 1270 in the so-called Mainzer Heberolle ("Mainz Levy Roll" – a taxation document). In the mid 13th century, all these places appeared in the Koppelfutter-Verzeichnis ("Paddock Fodder Directory"). Eichelsbach (also then known as Egilespach, Aigilspach or Egilspach) was leibeigen – in serfdom.

The area's prince was the Archbishop and Elector of Mainz. The resident lords were therefore enfeoffed by Electoral Mainz.

Until the 1803 Reichsdeputationshauptschluss, the community's development was tightly bound to Klingenberg castle, town, court, Amt and stewardship holdings. In 1803, the area became part of the Principality of Aschaffenburg. In 1804, Elsenfeld passed to the Grand Duchy of Frankfurt and was transferred into the ownership if the Kingdom of Bavaria in 1814. Eichelsbach and the remaining Himmelthal monastic landholdings were delivered from serfdom and socage.

On 30 July 1828, Elsenfeld was separated from the Klingenberg district court and assigned to the Obernburg district court, with which it remained until Gebietsreform (district reform) in 1972.

On 1 July 1971, the formerly self-administering communities of Rück-Schippach and Eichelsbach voluntarily amalgamated with the market community of Elsenfeld.

The inhabitants are overwhelmingly Catholic.

According to official statistics, there were 999 workers on the social welfare contribution rolls working in producing businesses in 1998. In trade and transport this was 0. In other areas, 498 workers on the social welfare contribution rolls were employed, and 3,157 such workers worked from home. There were 0 processing businesses. Eight businesses were in construction, and furthermore, in 1999, there were 34 agricultural operations with a working area of 678 ha, of which 504 ha was cropland and 157 ha was meadowland.

In the outlying centre of Rück lies a winegrowing area for Frankenwein with the appellation Rücker Schalk. 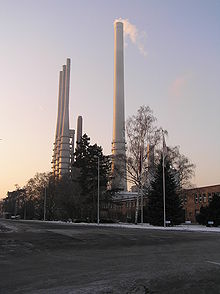 Partly within Elsenfeld's limits lies an industrial park called the Industrie Center Obernburg (ICO); although it is also locally known as "Glanzstoff", after the former owners, Vereinigte Glanzstoff-Fabriken AG. There, in line with tradition, various kinds of chemical fibres are produced. Moreover, the industrial park is home to many other, smaller businesses in various fields. Although the industrial park bears the name Obernburg, and this is also the postal address, it lies exclusively within the communities of Erlenbach am Main and Elsenfeld. 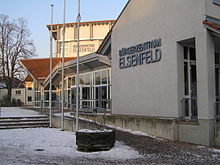 The community's arms might be described thus: Per pale, dexter gules a wheel spoked of six, in base a bend wavy argent, sinister of the second a mount, thereon an alder tree vert.

The alder in the arms is known locally as an Elsenbaum and stands for the first two syllables. The wavy fess stands for the community's geographical location on the local brook, the Elsava, and at the same time, it refers to the community's name, which is derived from the brook's. The wheel is the Wheel of Mainz; it, along with the tinctures argent and gules (silver and red), refers to Electoral Mainz's former hegemony in this part of Germany.

There is a municipal library with some 22,700 media.

For 15 years the Himmelthaler Sommerkonzerte have been staged at the church of Kloster Himmelthal [de] (Himmelthal monastery). Furthermore, there is also Elsenfeld's and the Rück Winegrowers’ Association's wine-sampling parlour at the monastery.

The signage along the Franconian Red Wine Hiking Path

Elsenfeld features a railway station, run by Deutsche Bahn AG as Bahnhof Obernburg-Elsenfeld, though it is actually on the Elsenfeld side of the Main. From there run regional services on the Maintalbahn to Aschaffenburg and Miltenberg. The Obernburg-Elsenfeld–Heimbuchenthal railway line was closed by 1978, and has been largely converted into a bicycle path.

Elsenfeld lies right at the Obernburg am Main interchange of Bundesstraße 469 [de].

In 2001, the indoor swimming pool was renovated and reopened as the Elsavamar Leisure Pool. The pool contains a 25 m basin with a non-swimmer area as well as a water and rock playing area for young children. In the foyer and the bathing area is a cafeteria. A sunroom with access to the leisure area and to the sunbathing field is inviting to those who want to unwind. In November 2007, a sauna was opened.

On 30 April 2000 in the former outdoor swimming pool property, Northern Bavaria's biggest multifunctional beach sport facility with six beach volleyball courts was opened. In the former diving basin, a skating facility with a halfpipe, a 450 m² wetland biotope, an integrated festival square with a bowls area, a badminton and streetball court, table tennis tables, big chessboards, a music pavilion and in the former wading pool a water and adventure playground for children up to ten years old were built.