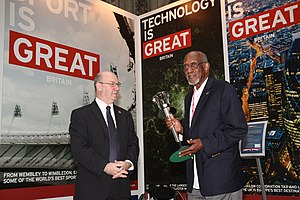 Dillard was born in Cleveland, Ohio on July 8, 1923[3][1] and attended East Technical High School. He entered Baldwin-Wallace College in 1941 and joined Pi Lambda Phi International Fraternity, and two years later was drafted into the U.S. Army serving in the all-black 92nd Infantry Division known as the Buffalo Soldiers.[4] He returned to college in 1946 and resumed athletics, inspired by Jesse Owens, who, like him, was from Cleveland and had attended East Technical High School. He won the NCAA and AAU 120-yard and 220-yard hurdles in both 1946 and 1947 and he tied world records in both events with a 22.3 in the 220 in 1946 and a 13.6 in the 120. Between June 1947 and June 1948 he remained unbeaten in 82 consecutive finals, a record until broken by Ed Moses.

At the trials for the 1948 Summer Olympics, Dillard failed to qualify for the 110 m hurdles event, but qualified for the 100 m after finishing third.

At the Games, Dillard reached the final, which seemed to end in a dead heat between Dillard and another American, Barney Ewell. The finish photo showed Dillard had won, equalling the World record as well. This was the first use of a photo finish at an Olympic Games.[5] As a member of the 4 × 100 m relay team, he won another gold medal at the London Games.[1]

Four years later, still a strong hurdler, Dillard did qualify for the 110 m hurdles event, and won the event in Helsinki.[3] Another 4 × 100 m relay victory yielded Dillard's fourth Olympic title. Dillard attempted to qualify for a third Olympics in 1956, but failed (finishing seventh in the trials final [6]). Earlier he took part in and won the gold medal in the 110m hurdles at the 1953 Maccabiah Games.[7][8]

Dillard worked for the Cleveland Indians baseball franchise in scouting and public relations capacities, and hosted a radio talk show on Cleveland's WERE. He also worked for the Cleveland City School District for many years as its Business Manager.[1] Dillard died on November 15, 2019, at the age of 96 of stomach cancer.[9] At the time of his death he was the United States' oldest living Olympic gold medallist.[10]

Dillard achieved the following world records during his track career:[15]

He also ran the following world best times that were never ratified by the sport's governing body, the IAAF: