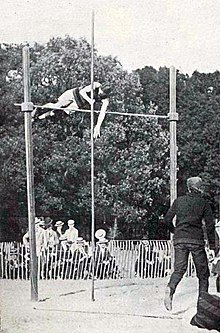 Baxter also took second place to Ray Ewry in all three of the standing jumps (long, triple, and high) in 1900.

He graduated from Trinity College in Hartford, CT in 1899 and the University of Pennsylvania School of Law in 1901[2] Baxter is buried at Forest Hill Cemetery in Utica, New York.[3]