Kelshall is a small village in North East Hertfordshire, England. It is near the town of Royston. It has a village hall and the local church is St Faith's. Kelshall is also the name of the civil parish. Kelshall also has a major road running along one of its boundaries. In the 1880s the church was described as being "ancient, plain, and good, with a tower; and contains a few brasses and monuments".[2]

In April 2015, North Hertfordshire District Council announced that a Roman copper-alloy jug had been discovered in a field in Kelshall by a metal detectorist in late 2014. A subsequent archaeological dig found a Roman grave, which contained a number of other artefacts[3] believed to date to between 205 and 215AD, including a silver denarius of Trajan, three 2nd century copper-alloy coins, a quantity of Roman glass, including bottles, glasses and two polychrome dishes thought to have been made in Roman Alexandria.[4] In 2017, Ian Richardson, the treasure registrar for the Portable Antiquities Scheme, judged the dishes to be amongst the five most significant finds of recent years.[5] The artefacts were bought by the North Hertfordshire Museum.[6]

According to the 2011 Census, there are 87 economically active people in Kelshall, aged between 16–74. Only 22.3% of the total population is made up of full-time employees. There are 24 retired people, which make up 19.8% of the population.[9]

According to the 2011 Census, 44 of the economically active people are males.[10] 43 of these are female.[11] "The rate of unemployment in Kelshall is both lower than the average for Hertfordshire and lower than the national average, suggesting that finding a job in this area may be easier than other places"[12]

The number of people in Kelshall that are in manufacturing is 9, (10.8%), compared to 1 person working in Real Estate Activities (1.2%) and 5 people working in Financial and Insurance Activities (6.0).[13] There are many different industries in Kelshall, "The parish is mainly agricultural, the chief crops being wheat, oats and roots, and only a small proportion of the land is laid down to pasture".[14]

There are many key destinations that are accessible from Kelshall, using their local bus service, these are Royston, Hitchin and Letchworth.[15] "The village lies about 2 miles to the south of the Icknield way, with which it is connected by roads leading north, joining in the village and thence going to Therfield and the Ermine Street at Buckland". There is also a road that leads to Buckland and this is where the main part of the village is actually situated.[16]

Total population of Kelshall civil parish, 1801–1961, as reported by the Census of Population

St.Faith's Church was restored thoroughly from 1868–70.[19] It is situated on the edge of the village and the ceilings are painted in a medieval style, which was done recently. The south door is also described as being "contemporary".[20] "Several small ponds lie on the east of the church, and from the formation of the ground it appears probable that there was once a moat here".[16] 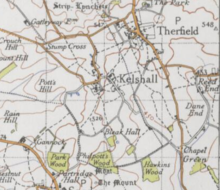 Map of Kelshall civil parish from the 20th century