La Cañada Flintridge, commonly known as "La Cañada" (Spanish for "The Canyon"), is a city in the foothills of the Verdugo Mountains[7] in Los Angeles County, California. Located in the Crescenta Valley, in the western edge of Southern California's San Gabriel Valley, it is the location of NASA's Jet Propulsion Laboratory. Before the city's incorporation on November 30, 1976, it consisted of two distinct communities, "La Cañada" and "Flintridge". 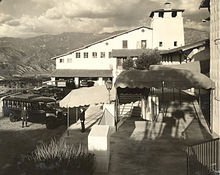 The Flintridge Biltmore Hotel around 1927. Now the Administration Building at the Flintridge Sacred Heart Academy.

Reference to the entire city is often shortened to just "La Cañada" or seldom to just "Flintridge". The full city name specifically does not have a hyphen in it, to illustrate unity between the two communities that became one.[8]

During the Spanish and Mexican eras, the area was known as Rancho La Cañada. La Cañada comes from the Spanish word cañada (pronounced [kaˈɲaða]), meaning 'canyon', 'gorge', or 'ravine'.

Flintridge comprises the southern part of the city, covering the northern flank of the San Rafael Hills, but more generally including most areas south of Foothill Blvd. The eastern part, even north of Foothill Blvd, was also originally considered Flintridge and is still home to the Flintridge Riding Club and Flintridge Preparatory School.

On November 30, 1976, the cities of Flintridge and La Cañada were merged into a single incorporated city named "La Cañada Flintridge".[10]

The city is situated in the Crescenta Valley and far western end of the San Gabriel Valley, between the San Gabriel Mountains and Angeles National Forest to the north, and the San Rafael Hills to the south. Most of the city drains southeastward toward the Arroyo Seco area in Pasadena, but the western part of the city (generally west of Alta Canyada Road) drains southward toward Glendale via Verdugo Canyon. Both drainages join the Los Angeles River north of downtown Los Angeles. It is built of the Angeles Crest, the San Rafaels, and the canyon in the middle.[clarification needed]

La Cañada Flintridge varies in elevation from about 970 feet (295 m) just below Devil's Gate Dam in the Arroyo Seco to about 2400 feet (730 m) at the highest neighborhood, along the mountain front east of Pickens Canyon, at the upper end of Ocean View Blvd. The city limits extend into the San Gabriel Mountains and reach 3440 feet (1050 m) along Mount Lukens Road, which follows the crest line well above the developed city.

In August 2009, the city came under threat by the Station Fire. The city is considered a "very high fire hazard severity zone" because of the local topography at the base of the San Gabriel Mountains and abundance of California Live Oak, despite an aggressive fire safety program.[12]

The city is home to Descanso Gardens and NASA's Jet Propulsion Laboratory. 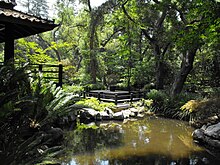 The climate of La Cañada Flintridge is typical of a Southern California inland valley, with mild winters and hot summers. Spring often has hazy days, in contrast to the more persistently clear weather of fall. On average, the warmest month is August with high temperatures in the low to mid 90s and lows in the low 70s. December and January are the coolest months with typical highs in the low to mid 60s and lows in the low 40s. Rainfall occurs mostly during winter, averaging about 21 inches annually. Rainfall is rare in summer. The moderating influence of the ocean (22 miles, 35 km, away) is limited due to the city's location inland from the intervening Santa Monica Mountains, the Verdugo Mountains, and the San Rafael Hills. Consequently, summers are generally hotter and winters often cooler than in coastal parts of metropolitan Los Angeles if winds are calm or blowing gently offshore. Occasional strong offshore winds, known as the Santa Ana winds, can bring particularly hot air in summer and fall as air from the desert plateaus crosses the mountains and descends, thus warming further by adiabatic heating. Summer and early fall temperatures are substantially cooler if the prevailing wind is persistently onshore. Occasionally during a winter storm, the upper elevations of the city may see trace amounts of snow. The small ski resorts Mountain High, Mount Baldy, and Mount Waterman are located about 30 miles (48 km) to the northeast.

According to the 2010 United States Census, La Cañada Flintridge had a median household income of $156,952, with 1.8% of the population living below the federal poverty line.[16]

There were 6,823 households, out of which 44.1% had children under the age of 18 living with them, 73.7% were married couples living together, 7.3% had a female householder with no husband present, and 16.6% were non-families. 14.4% of all households were made up of individuals, and 8.0% had someone living alone who was 65 years of age or older. The average household size was 2.95 and the average family size was 3.27. 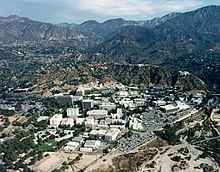 La Cañada Flintridge is governed by its city council, which has five members, each elected to overlapping four-year terms. Each year, the council selects one of its members to serve as mayor and another to serve as mayor pro-tem for terms of one year. The elections were held on March of odd-numbered years until 2017. Beginning in 2020, the elections are held during the California Primary elections. The council is aided by five commissions and two committees, each with its own area of responsibility. In addition, the council appoints the city manager, city attorney, city treasurer, and all members of its advisory bodies. It also serves as the governing board for the public improvement corporation, the redevelopment agency, the LCF Local Financing Authority, and Sanitation Districts No. 28 and No. 34.

In the state senate, La Cañada Flintridge is in the 25th Senate District, represented by Democrat Anthony Portantino.[26]

The La Cañada Unified School District (LCUSD) serves most of the city and is ranked as one of the top school districts in the state. On September 13, 2010, the California Department of Education announced that 2010 California Standards Tests (CSTs) results indicate that the La Cañada Unified School District earned the second highest Academic Performance Index (API) score in the state.[28] The API reflects a district's performance level, based on the results of statewide testing.[29] The district has three public elementary schools that serve grades K-6: La Cañada Elementary, Palm Crest Elementary, and Paradise Canyon Elementary School. The public high school, La Cañada High School, which also serves as a middle school (grades 7–8), is a 1993 and 2004 Blue Ribbon School.[30]

Several private schools that are not part of the LAUSD are located within La Cañada. The private high schools within the city limits are St. Francis High School, Flintridge Sacred Heart Academy, and Flintridge Preparatory School.

The Los Angeles County Fire Department (LACoFD) operates fire stations 19 and 82 in the city. Fire stations 11 and 12 in Altadena, and station 63 in La Crescenta-Montrose also serve the city regularly. Emergency transportation is done by Care Ambulance Service. Annual landscaping inspections and "stringent fire-safe building codes" were put in place to mitigate the risk of wildfires, like the 2009 Station Fire.[12]

La Cañada Flintridge is the southern terminus of the Angeles Crest Highway. It begins at the intersection with Foothill Boulevard and follows a two-mile, 5% grade before entering the San Gabriel Mountains.

On September 5, 2008, a big rig carrying 78,000 pounds of onions lost its brakes on the Angeles Crest Highway. To avoid a collision with the Hill Street Café at the intersection with Foothill Boulevard, the rig turned towards a small driveway, sideswiped the Café, crashed into a wall, a garbage bin, a tree and six vehicles before coming to rest in the parking lot. James Bines, 43, of Florida, and his passenger, Willy Robinson, had been hauling a full load of onions through the high desert area in the 18-wheeler. They traveled over the Angeles Crest Highway because, Bines said, he had received directions from his global positioning system that the highway, State Route 2, was the most direct route from there to Los Angeles.[35][36]

On April 1, 2009, a similar incident occurred at roughly the same location. A car carrier transporting six cars southbound on the Angeles Crest Highway lost its brakes and, despite three runaway vehicle escape medians in the center islands, caused multiple vehicle accidents that resulted in two fatalities and 12 injuries, three of them critical. Angel Jorge Posca, 58, and his 12-year-old daughter Angelina, both of Palmdale, had just exited the eastbound Foothill Freeway at the Angeles Crest Highway in their red Ford Escort and were starting to turn north on the highway to return to Palmdale when the semi-truck struck their vehicle.[37]

A bill that bans heavy trucks with three or more axles from driving on the Angeles Crest Highway was signed into law by Gov. Arnold Schwarzenegger on August 6, 2009.[38]