The London Borough of Redbridge is a London borough established in 1965.[2]

The principal settlements in the borough are Ilford, Wanstead, and Woodford.

The name comes from a bridge over the River Roding which was demolished in 1921. The bridge was made of red brick, unlike other bridges in the area made of white stone. The name had first been applied to the Redbridge area and Redbridge tube station was opened in 1947. It was earlier known as Hocklee's Bridge.[3]

See also: Parks and open spaces in the London Borough of Redbridge

Redbridge has more than 35 parks, playgrounds and open spaces. These include Hainault Forest Country Park, with 300 acres of countryside including adventure play areas, cafe and petting zoo; Roding Valley Park, a wildlife sanctuary with a range of flora and fauna and woodland areas; Valentines Park, including Valentines Mansion, ornamental gardens, bowling green and outdoor gym; and Claybury Woods and Park, a conservation area that features an ancient area of oak and hornbeam woodland, meadows and wildlife ponds.[4]

Valentines Mansion is a Georgian country house and gardens in the grounds of Valentines Park, Ilford.[5]

Redbridge Museum, which opened in 2000, is situated on the second floor of Redbridge Central Library, Clements Road, Ilford, along with the Redbridge Heritage Centre.[7][8]

The Embassy Cinema is an Art Deco former cinema in Chadwell Heath. It opened in 1934 and closed in 1966, but is currently the focus of a major restoration project.[9]

Redbridge has 13 libraries across the borough. This includes the Redbridge Central Library, in Clements Road, Ilford, which had a major refurbishment in 2012. The libraries offer a number of services including reading clubs, story time sessions, study areas and learning resources. The libraries in Redbridge are:[10]

Redbridge has a number of sports and leisure facilities including the road and off-road cycling tracks at Redbridge Cycling Centre.[11]

There are two local football teams both playing in the Isthmian League Division One: Redbridge F.C. (not to be confused with Dagenham & Redbridge) and Ilford FC. In addition there is fellow Non-League football club Barkingside F.C. who play at The Oakside stadium.[12]

Valentines Park in Ilford acted as one of Essex County Cricket Club's home grounds in 1923-4 and from 1935 until 2002, when the club stopped playing there due to financial constraints.[13]

A map showing the wards of Redbridge since 2002
Main article: List of districts in the London Borough of Redbridge

Population pyramid of Redbridge in 2020

In 2011 the population of Redbridge was recorded at 278,970.[14] In common with the other London boroughs this continues a period of growth; between the 1991 and 2001 censuses the increase was 7.5%[15] with a further rise of 15.3% by 2011.[14] Redbridge has the third highest proportion of children and a higher-than-average proportion of older adults while the proportion of working age adults is slightly lower than average.[16] The population density was last recorded at 4,945 residents per km2 (the London regional density is 5,199, far higher than the England and Wales figure of 371).[14]

Redbridge is one of the most ethnically diverse local authorities in the UK. 34% of respondents to the 2011 census stated that they were born outside the UK and 65.5% identified as belonging to an ethnic group other than white British.[18] Redbridge's largest ethnic group is White British (34.5%), followed by Indian (16.4%),[18] and Pakistani (Redbridge has the highest proportion of Pakistani residents of any London borough).[18]

The number of Christians in 2011 residing in Redbridge ranked fourth lowest in England and Wales, and 12 percent below the London average of 48.4%. The number of Muslims in Redbridge has more than doubled since 2001.[25]

The Roding Valley Way is a designated walking and cycling route between Woodford and Ilford.[26]

These services serving these stations will be rebranded from TfL Rail to Elizabeth Line in late 2020.

Central line: Hainault Loop (follows the route of the A12 from Wanstead to Newbury Park)

Numerous London buses run through and within the borough.

The borough was formed in 1965 by the London Government Act 1963 as a merger of the former area of: 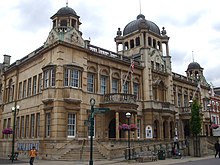 All of which had been transferred from Essex to Greater London by the Act. The former town hall in Ilford is now known as Redbridge Town Hall.[30]

In November 2018, Redbridge Council was reported as the sixth-most productive council in England overall and the most productive in provision of adult social care in a report published by the public service consultancy iMPOWER.[35][36]

Redbridge Council is the Local Education Authority. The Borough has the accolade of sending more young people to university than any other borough in the country in both 2011 and 2012. GCSE and A Level results are consistently higher than the Country's average. A 2017 report by Trust for London and the New Policy Institute found that Redbridge has the highest proportion of 19 year olds with Level 3 qualifications (equivalent to an A Level) of any London borough.[41]

All schools in the borough take part in the Redbridge Schools Choral Festival, a bi-annual music festival held in the Royal Albert Hall in Knightsbridge.[42]

Main article: List of people from the London Borough of Redbridge