Shortcuts
The United States of America is a federal republic of 50 states, a capital district, and a number of other territories. It is located mostly in central North America. The U.S. has three land borders, two with Canada and one with Mexico, and has sea borders with Cuba, the Bahamas, the Dominican Republic, Bermuda and Russia, and is otherwise bounded by the Pacific Ocean, the Bering Sea, the Arctic Ocean and the Atlantic Ocean. Of the 50 states, only Alaska and Hawaii are not contiguous with any other state. The U.S. also has a collection of districts, territories, and possessions in the Caribbean Sea and Pacific Ocean. Each state has a high level of autonomy according to the system of federalism. The U.S. traces its national origin to the declaration by 13 British colonies in 1776 that they were one free and independent state. They were recognized as such by the Treaty of Paris in 1783. Since then, the nation has grown to become a global superpower and exerts a high level of economic, political, military, and cultural influence.

More about the United States, its history and diversity
Refresh with new selections below (purge)

Lawrence Sullivan Ross (1838–1898) was the 19th Governor of Texas, a Confederate States Army general during the American Civil War, and a president of the Agricultural and Mechanical College of Texas. As a teenager, Ross attended Baylor University and Florence Wesleyan University. After graduation Ross became a Texas Ranger, and in 1860 led troops in the Battle of Pease River, where he rescued Cynthia Ann Parker, who had been captured by the Comanches as a child. When Texas joined the Confederacy, Ross joined the Confederate States Army. He participated in 135 battles and skirmishes and became one of the youngest Confederate generals. Following the Civil War, Ross briefly served as sheriff of McLennan County before resigning to participate in the 1875 Texas Constitutional Convention. With the exception of a two-year term as a state senator, Ross spent the next decade focused on his farm and ranch concerns. In 1887, he became the 19th governor of Texas. During his two terms, he oversaw the dedication of the new Texas State Capitol, resolved the Jaybird-Woodpecker War, and became the only Texas governor to call a special session to deal with a treasury surplus. Days after leaving office, Ross became president of the Agricultural and Mechanical College of Texas. After his death, the Texas legislature created Sul Ross State University in his honor.

Elvis Presley (1935–1977) was an American singer and one of the most important figures of 20th-century popular culture. He is often referred to as the "King of Rock and Roll" or simply "the King". Born in Tupelo, Mississippi, Presley moved to Memphis, Tennessee, at the age of 13. He began his career there in 1954 and became the leading figure of the newly popular sound of rock and roll with a series of television appearances and chart-topping records during the late 1950s. Conscripted in 1958, Presley relaunched his recording career two years later with some of his most commercially successful work. In 1968, after seven years away from the stage, he returned to live performance in a celebrated comeback television special that led to an extended Las Vegas concert residency and a string of profitable tours. In 1973 Presley staged the first concert broadcast globally via satellite, Aloha from Hawaii, seen by around 1.5 billion viewers. Prescription drug abuse severely affected his health, and he died suddenly in 1977 from cardiac arrest. With his versatile voice and unusually wide success encompassing many genres, Presley is the best-selling solo artist in the history of popular music. Nominated for 14 competitive Grammys, he won three, and received the Grammy Lifetime Achievement Award at age 36. He has been inducted into multiple music halls of fame 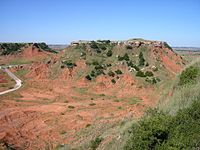 Oklahoma is a state located in the South Central region of the United States of America. With an estimated 3,579,212 residents and a land area of 68,667 square miles (177,847 km²), Oklahoma is the 28th most populous and 20th-largest state. Its name is derived from the Choctaw words okla and humma, meaning "red people", and is known informally by its nickname, The Sooner State. Formed from Indian Territory on November 16, 1907, Oklahoma was the 46th state to enter the union. Its citizens are known as Oklahomans, and the state's capital and largest city is Oklahoma City.

A major producer of natural gas, oil and food, Oklahoma relies on an economic base of aviation, energy, telecommunications, and biotechnology. Oklahoma City and Tulsa serve as Oklahoma's primary economic anchors, with nearly 60 percent of Oklahomans living in their metropolitan statistical areas.

With small mountain ranges, prairie, and eastern forests, most of Oklahoma lies in the Great Plains and the U.S. Interior Highlands—a region especially prone to severe weather. With a prevalence of residents with Native American ancestry, more than 25 Native American languages are spoken in Oklahoma, the most of any state. It is located on a confluence of three major American cultural regions and historically served as a route for cattle drives, a destination for southern settlers, and a government-sanctioned territory for Native Americans.

The cuisine of the antebellum United States characterizes American eating and cooking habits from about 1776 to 1861. During this period different regions of the United States adapted to their surroundings and cultural backgrounds to create specific regional cuisines, modernization of technology led to changes in food consumption, and evolution of taverns into hotels led to the beginnings of an American temperance movement. By the beginning of the Civil War, the United States cuisine and food culture could define itself separately from that of the rest of the world. (Full article...)

View of the Midtown Manhattan skyline, looking north from the Empire State Building.