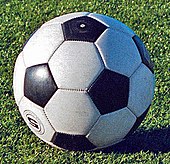 A football (also known as football ball, soccer ball, or association football ball specifically in the United Kingdom) is the ball used in the sport of association football. The name of the ball varies according to whether the sport is called "football", "soccer", or "association football". The ball's spherical shape, as well as its size, weight, and material composition, are specified by Law 2 of the Laws of the Game maintained by the International Football Association Board. Additional, more stringent standards are specified by FIFA and subordinate governing bodies for the balls used in the competitions they sanction.

Early footballs began as animal bladders or stomachs that would easily fall apart if kicked too much. Improvements became possible in the 19th century with the introduction of rubber and discoveries of vulcanization by Charles Goodyear. The modern 32-panel ball design was developed in 1962 by Eigil Nielsen, and technological research continues today to develop footballs with improved performance. The 32-panel ball design was soon overcome by 24-panel balls as well as 42-panel balls, both of which improved performance compared to before, in 2007.[citation needed]

A black-and-white patterned spherical truncated icosahedron design, brought to prominence by the Adidas Telstar, has become a symbol of the sport.[1] Many different designs of balls exist, varying both in appearance and physical characteristics.[2] 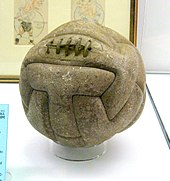 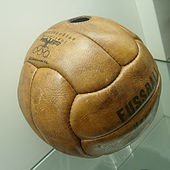 In the year 1863, the first specifications for footballs were laid down by the Football Association. Previous to this, footballs were made out of inflated animal bladder, with later leather coverings to help footballs maintain their shapes.[3] In 1872 the specifications were revised, and these rules have been left essentially unchanged as defined by the International Football Association Board. Differences in footballs created since this rule came into effect have been to do with the material used in their creation.

Footballs have gone through a dramatic change over time. During medieval times balls were normally made from an outer shell of leather filled with cork shavings.[4] Another method of creating a ball was using animal bladders for the inside of the ball making it inflatable. However, these two styles of creating footballs made it easy for the ball to puncture and were inadequate for kicking. It was not until the 19th century that footballs developed into what a football looks like today.

In 1838, Charles Goodyear introduced vulcanized rubber, which dramatically improved the football.[5] Vulcanisation is the treatment of rubber to give it certain qualities such as strength, elasticity, and resistance to solvents. Vulcanisation of rubber also helps the football resist moderate heat and cold. Vulcanisation helped create inflatable bladders that pressurize the outer panel arrangement of the football. Charles Goodyear's innovation increased the bounce ability of the ball and made it easier to kick. Most balls of this time had tanned leather with eighteen sections stitched together. These were arranged in six panels of three strips each.[6][7]

During the 1900s, footballs were made out of leather with a lace of the same material (known as tiento in Spanish) used to stitch the panels. Although leather was perfect for bouncing and kicking the ball, when heading the football (hitting it with the player's head) it was usually painful. This problem was most probably due to water absorption of the leather from rain, which caused a considerable increase in weight, causing head or neck injury. By around 2017, this had also been associated with dementia in former players.[8] Another problem of early footballs was that they deteriorated quickly, as the leather used in manufacturing the footballs varied in thickness and in quality.[6]

The ball without the leather lace was developed and patented by Romano Polo, Antonio Tossolini and Juan Valbonesi in 1931 in Bell Ville, Córdoba Province, Argentina.[9][10] This innovative ball (named Superball) was adopted by the Argentine Football Association as the official ball for its competitions since 1932.[11] 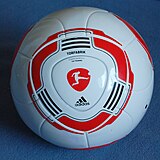 Adidas Torfabrik football used in the Bundesliga in 2011

Elements of the football that today are tested are the deformation of the football when it is kicked or when the ball hits a surface. Two styles of footballs have been tested by the Sports Technology Research Group of Wolfson School of Mechanical and Manufacturing Engineering in Loughborough University; these two models are called the Basic FE model and the Developed FE model of the football. The basic model considered the ball as being a spherical shell with isotropic material properties. The developed model also used isotropic material properties but included an additional stiffer stitching seam region.

Manufacturers are experimenting with microchips and even cameras embedded inside the ball. The microchip technology was considered for the goal-line technology. The ball used in the 2018 FIFA World Cup in Russia had an embedded chip which did not provide any measurements, but provided 'user experience' via smartphone after connecting with the ball via NFC.[12][13][14]

Companies such as Umbro, Mitre, Adidas, Nike, Select and Puma are releasing footballs made out of new materials which are intended to provide more accurate flight and more power to be transferred to the football.[15][16]

Today's footballs are much more complex than past footballs. Most modern footballs consist of twelve regular pentagonal and twenty regular hexagonal panels positioned in a truncated icosahedron spherical geometry.[4] Some premium-grade 32-panel balls use non-regular polygons to give a closer approximation to sphericality.[17] The inside of the football is made up of a latex or butyl rubber bladder which enables the football to be pressurised. The ball's outside is made of leather, synthetic leather, polyurethane or PVC panels. The surface can be textured, weaved or embossed for greater control and touch. The panel pairs are either machine-stitched, hand-stitched or thermo-bonded (glued and bonded by heat) along the edge.[5] To prevent water absorption balls may be specially coated, or the stitches bonded with glue. The size of a football is roughly 22 cm (8.66 inches) in diameter for a regulation size 5 ball. Rules state that a size 5 ball must be 68 to 70 cm (27 to 28 in) in circumference.[18] Averaging that to 69 cm (27 in) and then dividing by π gives about 22 cm (8.7 in) for a diameter. 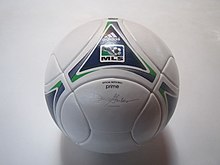 Many companies throughout the world produce footballs. The earliest balls were made by local suppliers where the game was played. It is estimated that 55% of all footballs are made in Sialkot, Pakistan, with other major producers being China and India.[21]

As a response to the problems with the balls in the 1962 FIFA World Cup, Adidas created the Adidas Santiago[22] – this led to Adidas winning the contract to supply the match balls for all official FIFA and UEFA matches, which they have held since the 1970s, and also for the Olympic Games.[23] They also supply the ball for the UEFA Champions League which is called the Adidas Finale.

In early FIFA World Cups, match balls were mostly provided by the hosts from local suppliers. Records indicate a variety of models being used within individual tournaments and even, on some occasions, individual games. Over time, FIFA took more control over the choice of ball used. Since 1970 Adidas have supplied official match balls for every tournament.[24]

The following lists the most up-to-date balls used in various club football competitions (as of 2022–23 season):

The association football symbol (U+26BD ⚽ SOCCER BALL) was introduced by computing standard Unicode.[32] The symbol was representable in HTML as &#9917; or &#x26BD;.[citation needed] The addition of this symbol follows a 2008 proposal by Karl Pentzlin.[33]