After the Reformation the manor belonged to St Paul's Cathedral; the name St Paul's Walden serves to distinguish the parish from King's Walden, although the Dean and Chapter sold their property in the 17th century. 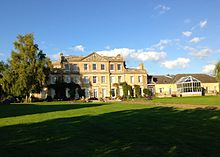 Sir Arthur Sullivan rented the property in the 1880s around the time he composed The Mikado.[2]

St Paul's Walden Bury is owned by the Bowes-Lyon family. Members include Queen Elizabeth The Queen Mother. While the details of her birth in 1900 are uncertain, the house is one of the locations that has been posited as her birthplace.[3] It is accepted that she was baptised in All Saints' church, St Paul's Walden.[4][3]

On 23 January 1923, the then Prince Albert, Duke of York, later to become King George VI, drove up to St Paul's Walden in his sports car, and proposed to Elizabeth in the woods at the Bury.[5]

The gardens of St Paul's Walden Bury are listed as grade I on the Register of Historic Parks and Gardens of Special Historic Interest in England.[6] They are occasionally opened to the public under the National Garden Scheme, a charity of which the Queen Mother was patron.[7]