Victorville is a city in Victor Valley in San Bernardino County, California. Its population as of the 2020 census was 134,810.[7]

In 1858, Aaron G. Lane came to what is now known as Victorville and founded a waystation called "Lane's Crossing." For many years it provided shelter and supplies for people journeying across the desert from the east to San Bernardino. Lane's Crossing was on the Mojave River on today's Turner Road, two miles north of where Interstate 15 crosses the river. Lane was a veteran of the Mexican–American War who had had malaria during that war. Originally he migrated west to join the California gold rush, but he learned that he could make a better living selling supplies to the miners.

Lane settled in Ione, near Sutter's Mill in northern California, during those years, but migrated to San Bernardino in 1857. He settled on the Mojave River in 1858, where he established his waystation. He later sold out to Texan John Fry Miller, who changed the name of Lane's Crossing to Pioneer Station.[10] Miller was a rancher and became involved in Mojave Valley politics, setting up the first polling place in the area at his home. That first year, ten citizens cast their votes at Lane's residence rather than making the long trip to San Bernardino.[11]

Census records show that ten people lived in two residences on the river by 1860. Listed in Dwelling No. 703 were Aaron Lane, William R. Levick, and the Nicholson family, consisting of George, Frances, and their three children aged 9 to 13. Joseph and Mary Highmoor lived in Dwelling No. 704, with a seven-year-old girl named Anna.[12]

The Levick, Nicholson and Highmoor families were Mormon pioneers. Highmoor established a way station called Highmoor's Crossing near today's Oro Grande bridge of the National Trails Highway (known as U.S. Route 66), over the Mojave River at what is called the Lower Narrows. The Nicholson family moved downriver a few miles and established a way station at "Point of Rocks" in today's Helendale area.

In 1867, Lafayette Meacham, a Mormon who ran a way station near today's Barstow area, made a new wagon road from his stage stop to what is now Old Town Victorville. It crossed the Mojave River at today's Sixth Street. This new road, now called Stoddard Wells Road, was a shortcut across the desert and became a popular route for muleskinners and freighters. The river crossing was called Mormon Crossing and the surrounding area became known by that name.

In the 1870s, Heber "Pete" Huntington established a stage stop, Huntington Station, at Mormon Crossing. Also a Mormon pioneer, Huntington was leader Brigham Young's nephew. Huntington later bought out the Stoddard brothers, who had a waystation halfway to today's Barstow from Victorville, and the Meachams, who ran the stage stop named Fish Ponds or Mormon Grocery.

In 1885, the newly established telegraph station at the railroad siding of "Victor", named for the California Southern Railroad's General Manager Jacob Nash Victor, was the beginning of what developed as today's Old Town Victorville. The village that sprang up around that railroad facility became known by the same name of Victor.

In 1901, at the suggestion of local postmistress Abbey Turner, the U.S. Post Office Department changed that name to Victorville to stop the postal confusion with the town of Victor, Colorado.

In 1926, U.S. Route 66 was begun, being marked in many areas on existing roads. In Victorville, US 66 is marked on D and Seventh streets, with a section of Interstate 15 going towards the Cajon Pass. It is the primary street through Old Town Victorville.

In 1940, Herman J. Mankiewicz and John Houseman wrote the first two drafts of the screenplay for the film Citizen Kane in Victorville. They worked in seclusion for 12 weeks while residing at the North Verde Ranch, now called the Kemper Campbell Ranch.[13]: 32 [14] The quiet ranch allowed Mankiewicz to complete his writing without the temptation of drinking, as he struggled with alcoholism.[15]

The Victorville Army Airfield was constructed beginning in 1941. It was renamed the George Air Force Base when the U.S. Air Force was established in October 1947. After decades of service to the Air Force, in 1992 George Air Force Base was closed. Its land was turned over to other uses. Part of it is now the Southern California Logistics Airport. The former Air Force base housing area is now vacant. It forms a ghost town used for military training by troops from the U.S. Army's Fort Irwin Military Reservation. The Victorville Federal Penitentiary has been built on another part of the former air base. 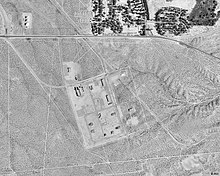 The penitentiary site as seen in 1994

The city of Victorville was officially incorporated by the State of California on September 21, 1962.

On August 14, 1977, actor Ron Haydock was struck and killed while hitchhiking near Victorville.[citation needed]

In 2003, the Roy Rogers and Dale Evans Museum[16] was moved from Victorville to Branson, Missouri. It closed before 2015.

Victorville is located at the southwestern edge of the Mojave Desert, 81 miles (130 km) northeast of Los Angeles, 148 miles (238 km) north of San Diego, 188 miles (303 km) southwest of Las Vegas, 32 miles (51 km) south of Barstow, 48 miles (77 km) east of Palmdale, and 36 miles (58 km) north of San Bernardino through the Cajon Pass on Interstate 15. Victorville is the location of offices of the "Mojave Desert Branch" of the San Bernardino County government.

Victorville is bordered by Apple Valley on the east, Hesperia on the south, and Adelanto on the west. The Mojave River flows sporadically through Victorville. The elevation at City Hall is approximately 2,950 feet (900 m) above sea level.

The city is in the High Desert, an area known for its unique and moderate weather patterns. The National Weather Service has maintained a weather station in Victorville since 1917. Official records show that Victorville has a cool arid climate (Köppen BWk) with four distinct seasons. Due to the higher elevation and inland location of the High Desert, the climate tends to be more extreme than in the Los Angeles Basin and other Southern California lowland regions.

Winter is the region's wet season, when Victorville receives the most storms. Due to the rain shadow effect caused by the San Bernardino Mountains and San Gabriel Mountains, the rainfall received is less than in the Los Angeles basin or even the San Bernardino Valley. Temperatures tend to be cool, with overnight low temperatures dropping to or below freezing on average. While the high temperatures average around a pleasant 60 °F or 15.6 °C, there are periods in which the high temperature fails to reach 50 °F (10 °C) or even 45 °F (7.2 °C). Low temperatures can dip below 25 °F (−3.9 °C) on occasion, with very cold temperatures possible; the record lowest temperature was −1 °F or −18.3 °C.[17] Snowfall and other wintry precipitation is also possible, although any snowfall tends to be very light and melt quickly; significant snowstorms as seen in the San Bernardino Mountains and San Gabriel Mountains are very rare.[18][19] Black ice is also possible during the winter.[20]

Summer days are generally hot to sweltering, with average high temperatures approaching 100 °F or 37.8 °C. It is also the time of year in which Victorville, and Southern California as a whole, receives the least precipitation. The higher elevation prevents the temperatures from matching the extreme heat seen in lower desert cities such as Palm Springs or Needles. However, heat waves can still raise the temperature to 110 °F or 43.3 °C, with the all-time record high being 116 °F or 46.7 °C.[21] Also unlike lower desert communities, the diurnal temperature variation is greater, allowing substantial relief to occur at night with average low temperatures approaching 60 °F or 15.6 °C. In the later part of the season, the average precipitation amount experiences an uptick due to the North American Monsoon bringing possible thunderstorms to the region. These thunderstorms can cause flash flooding, lightning, hail, and bring relief from the very hot summer days.[22][23]

Spring is a transitional season, with warm high temperatures and low temperatures remaining quite cool. Summer-like weather usually begins to appear in May while rainfall tapers off. Autumn also has generally warm to very warm high temperatures on average, with temperatures falling from hot in September to pleasant in November, and rainfall rates increasing. Winter-like weather usually begins to appear by late November. High wind events are common in Victorville year-round and particularly during the spring; they can down power lines and cause dust storms that reduce visibility.[24]

The city of Victorville operates with a council-manager form of government.

The current city council members and city manager are:[31]

This is a list of Victorville mayors by year. The mayor is appointed in December.

In the United States House of Representatives, Victorville is in California's 8th congressional district, represented by Democrat John Garamendi.[41]

According to the city's 2009 Comprehensive Annual Financial Report,[42] the top employers in the city are:

The Victor Valley Daily Press is published in Victorville.[44]

The city is home to the Southern California Logistics Airport. 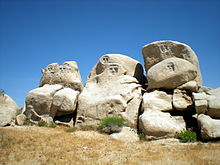 There are several notable areas and locations within Victorville such as Spring Valley Lake, the Old Sheriff's Office, U.S. Route 66, and the Victorville Film Archive.

A revitalization project started in 1995 in the ten square blocks along Historic Route 66. After years of setbacks in developing Old Town, the city, with input from residents and local business owners, created an Old Town Strategic Action Plan in 2007. In 2008, demolition of hazardous and dilapidated buildings began. In 2010, as the economy declined, the state eliminated Redevelopment Agencies which had funded the project and further work was put on indefinite hold.[49] As of 2012, the area still had problems with crime and homelessness, and many buildings remain boarded up.[50]

Projects include the Veteran's Memorial on the corner of Seventh Street and Forrest Avenue, the Route 66 Museum, the Transportation Center, and the Old Victor School. Several large murals have been painted on the sides of buildings in Old Town.[51]

Victorville has been used for commercial filming several times: