Warner Bros. Studio Tour London – The Making of Harry Potter is a walkthrough exhibition and studio tour in Leavesden, East of England, owned by Warner Bros. and operated by their Studio Tours division. It is located within Warner Bros. Studios, Leavesden, in Watford, in southwest Hertfordshire, and houses a permanent exhibit of authentic costumes, props and sets utilised in the production of the Harry Potter films, as well as behind-the-scenes production of visual effects. The tour is contained in Soundstages J and K, which were specially built for the attraction, and is separate from the studio's actual production facilities.

Leavesden Aerodrome was a British airfield created in 1940 by the de Havilland Aircraft Company & the Air Ministry in the tiny village of Leavesden, between Watford and Abbots Langley, in Hertfordshire. It was an important centre for aircraft production during World War II. By the end of the war Leavesden Airfield was, by volume, the largest factory in the world.[2]

After the war, the aerodrome was purchased outright by de Havilland, who themselves had a succession of owners in the following decades but ultimately they and the site were acquired by Rolls-Royce. However, by the early 1990s, Britain's manufacturing industry was in decline and Rolls-Royce had sold their interests in the site. Unable to find a new owner, Leavesden Aerodrome was left disused and all but abandoned.[3]

Then in 1994, the production team for the James Bond film GoldenEye discovered the unoccupied Leavesden. The wide, tall and open aircraft hangars were uniquely well suited to conversion into film stages. Eon leased the site for the duration of their shoot and went about gutting the factories, turning them into stages, workshops and offices - in short a working film studio.[4] Leavesden Studios, as the site was rebranded by its owners, quickly became popular after GoldenEye wrapped. A succession of major feature films made use of the site, including the first of the Star Wars prequels, The Phantom Menace, and Tim Burton's Sleepy Hollow.

As the eighth and final film, Harry Potter and the Deathly Hallows – Part 2, was nearing completion, in 2010, Warner Bros. announced their intention to purchase the studio as a permanent European base.[7]

By November, Warner Bros. completed its purchase of Leavesden Studios and announced plans to invest more than £100m into the site they had occupied for over ten years, rebranding it again - this time to Warner Bros. Studios, Leavesden.[8][9]

As part of this redevelopment, Warner Bros. also created two entirely new soundstages, J and K, to house a permanent public exhibition called Warner Bros. Studio Tour London – The Making of Harry Potter, creating 300 new jobs in the local area.[10] Currently the whole attraction is dedicated to the making of Harry Potter and is now home to many of the series' sets, props and costumes. It was opened to the public in early 2012.

As early as 2001, after the success of the first film, Warner Bros. were putting plans to build an attraction dedicated to the series in place and so began storing items from the films when they were no longer being used. In 2010, as the last film was nearing completion, Warner Bros. announced they would be purchasing Leavesden Studios and work on the tour began.

The tour's layout and overall presentation was designed by the Burbank-based Thinkwell Group in collaboration with Warner Bros, as well as the actual filmmakers, including production designer Stuart Craig, set dresser Stephenie McMillan, creature designer Nick Dudman, construction manager Paul Hayes and special effects supervisor John Richardson.[11] It only includes sets, props and costumes that were created for or used in the production of the Harry Potter film series. Sets include the Great Hall, Dumbledore's office, Diagon Alley, the Ministry of Magic, the Gryffindor common room and boys' dormitory, Hagrid's hut and a 1:24 scale model of the Hogwarts castle (used for exterior shots). 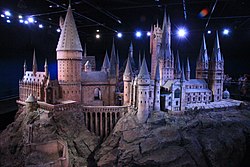 The 1:24 scale model of Hogwarts on display

Over a year since the opening of the tour (and nearly twenty years after the complex was converted from an aerodrome to film studios), the site was officially opened by the Duke and Duchess of Cambridge on 26 April 2013.[15] On their royal visit, they were accompanied by the Duke's brother Prince Harry and J. K. Rowling, author of the Harry Potter book series, who had been unable to attend the tour's grand opening the year before, amongst other guests. Several hundred beneficiaries of charities they all support were given exclusive invitations to the tour on the day of the royal visit. The royal entourage visited the tour and met many of their beneficiaries, as well as the studios, where they saw some of the props and costumes from Christopher Nolan's The Dark Knight trilogy, before conducting Leavesden's royal opening.[16][17]

Each tour session typically lasts three and a half hours,[18] and the tour has the capacity to handle 6,000 visitors daily.[19] Despite Warner Bros. being the studio behind Harry Potter, the tour is not styled as a theme park due to the fact that Warner Bros. sold the license to do so to Universal Studios.[19] Instead, visitors get a chance to see up close the detail and effort that goes into a major feature film at the scale of the Harry Potter series.

A shuttle bus system for tour goers operates between Watford Junction and the Studio Tour.[22]

Warner Bros. has continued to put on special features for the school holidays, such as Dark Arts[23] and Animal Actors,[24] at no extra cost to visitors. Some installations like the Wand Choreography Interactive and the inside of the No. 4 Privet Drive Exterior set have been so popular that they have remained after their respective features have closed.[25]

In January 2015, the attraction's first expansion was announced - a brand new Platform 9¾ section, where visitors are able to board the original carriages behind the Hogwarts Express steam engine used in the films. As with the rest of the attraction, the set was constructed and dressed by the original crew members who worked on the film - including Stuart Craig himself, who designed the new set exclusively for the tour (since these scenes in the films were actually shot on location in Kings Cross). The setup includes the steam locomotive used in the films GWR 4900 Hall class no 5972 Olton Hall (wearing Hogwarts Castle nameplates) and the British Rail Mark 1 carriage that appeared in the films, brought to life by John Richardson's special effects team. Finally a new green screen experience illustrates what working on the films is like from an actor's point of view. This section opened in late March 2015.[26]

On 1 July 2022, the Professor Sprout's Greenhouse expansion opened, as part of a new feature titled "Mandrakes and Magical Creatures".[31]

The tour was warmly received by the press in the run up to its launch. Anita Singh of The Daily Telegraph described the model of Hogwarts Castle as "the highlight" of the tour.[32]

The Warner Bros. Studio Tour London – The Making of Harry Potter has won several awards since its opening, including:

The Studio Tour has also been presented with awards for its lighting design, including the 2013 IES Illumination Award of Merit[40] and 2013 Lighting Design Award for Lighting for Leisure.[41]

In addition, the Studio Tour was named one of the Top 10 Most Innovative Entertainment Design Projects of 2012 by EntertainmentDesigner.com.[42]