According to the LA Weekly, there are different perspectives on where the Westside ends and the Eastside begins.[1] Generally, the Westside is the area south of the Santa Monica Mountains and Sepulveda Pass, and west of either:

Los Angeles Times readers submitted more than 300 maps, with borders ranging from Lincoln to La Brea and beyond. The most common east/west dividing lines were: Downtown, La Cienega Boulevard (the most common street cited), and the 405 freeway (the most common answer).

The Times analyzed the results and no one definition approached a majority. Ultimately, the Los Angeles Times Mapping Project settled on a definition comprising 101.28 square miles (262 km2), encompassing not only districts in the city of Los Angeles but also two unincorporated neighborhoods, plus the cities of Beverly Hills, Culver City, and Santa Monica, but excluding all of the city of West Hollywood – even areas west of La Cienega Boulevard.[2] 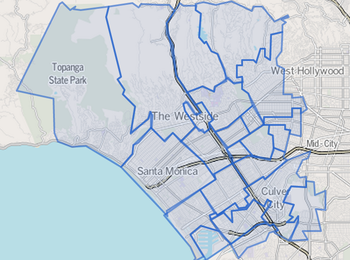 The Westside.
Map by the Los Angeles Times.[2]

According to the Mapping L.A. survey of the Los Angeles Times the Westside includes all of the below neighborhoods: 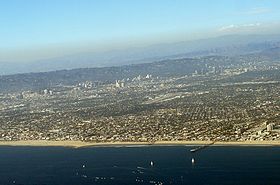 Fifty-three percent of West Los Angeles residents aged 25 and older had earned a 4-year degree by 2000, according to Census Bureau figures quoted by the Los Angeles Times. They included 89,620 people with master's degrees or higher and 117,695 with bachelor's degrees. In addition, 95,187 people in that age range had some college experience. There were 46,823 with high school diplomas but 40,451 who had dropped out before graduating.[2] As of 2019, the median income of the neighborhood was about $96,300.

Other post-secondary schools in the Westside are as follows:

The view from the Getty Center, centered on the Westside as the 405 goes through the Sepulveda Pass in the Santa Monica Mountains and down through the city

Other regions of Los Angeles County