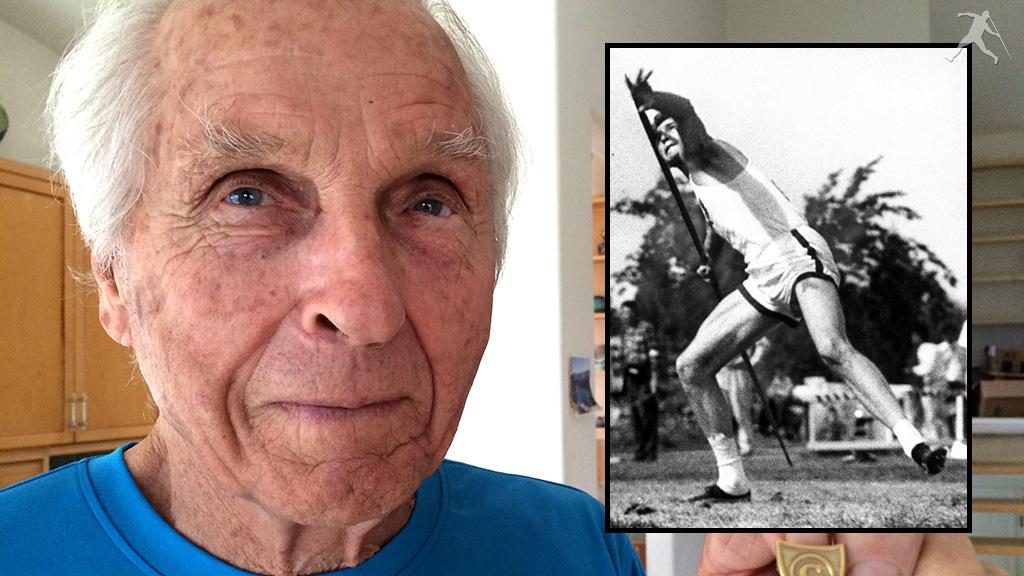 One was the first American to hold the world record in the javelin. Another competed in eight Olympic Trials and made three British Olympic teams. A third coached Australian throwers at three Summer Games.

The trio were among five javelin coaches or stars who shared thoughts on Leigh Petranoff’s dream to compete in the 2016 Rio de Janeiro Games.

The new San Marcos resident — a daughter of former world record holder Tom Petranoff — competed in the 2012 Olympic Trials. She is interviewed here.

Comments from a javelin panel assembled by Times of San Diego:

In 1953, Held became the first American to set a world record in the javelin — and the first to break the 80-meter mark with his world record of 263 feet 10 inches. He had a best of 270 feet and was inducted into the national Track & Field Hall of Fame in 1987.

Held: I feel a little presumptuous about making suggestions to Leigh about her javelin throwing, considering her father’s abilities. Also, I only saw her make one throw on one occasion, and I did not pay a lot of attention to her form.

I have noted, many years ago, that good javelin throwers come in all sizes. The big strong ones seem to lumber into throwing position and then strong-arm it. More of late, I have noticed that good smaller throwers, perhaps of necessity, seem to develop a technique for using more runway speed and somehow transferring their momentum into the javelin.

I used to try to do that when I was younger, but never really got it right. If I could still throw, I would work on that. My throwing weight was only 174 lbs. I watched some videos of [current world record holder] Jan Zelezney recently and tried to figure out how he managed his speed and footwork to get so much momentum into the javelin. I wish I could have done that.

My message to Leigh is to consider working on the speed and momentum transfer thing, and not to be discouraged. I had a whole down year in the middle of my throwing career, and the next year, for no understandable reason, I could throw again.

British-born Bradstock, an artist who has been dubbed “The Olympic Picasso,” has competed in eight Olympic Trials in the javelin, including as an American. At age 50, he took second in the 2012 British Olympic Trials but was short of the London Olympic qualifying standard. He holds a world record in the 50-54 age group at 249-10.

Bradstock: I can’t give specifics about what Leigh needs to do without having seen her throw and also reviewing her training program.

However, reading her responses to your questions is quite revealing. It sounds like she is figuring out what to do physically and technically. She will indeed need to get stronger, faster, more flexible and more explosive and avoid / limit injuries.

The key thing to do is to find the right balance. That can be tricky. If you lose your timing, your performance will suffer and the chance of injury increases.

Javelin throwing, more than any other event, I would argue, is all about timing. Zelezny had a great philosophy: If he improved his flexibility 10 percent, then he had to improve his strength and speed 10 percent.

He believed in balance. Another way of looking at it is you are only as strong as the weakest link.

It seems from Leigh’s comments that her “weakness” right now is her mental game. She is trying to understand the event and understand her ability. What she is going through is very common.

Javelin throwing is not an exact science. Getting stronger and faster does not automatically mean more distance, at least not immediately. For whatever reason, there is a delay — sometimes months, sometimes years! Frustration can rear its ugly head and then you push and everything falls apart.

The important thing she needs to do is stay relaxed, be confident and believe in herself.

She has two things going for her before she evens gets out of the gate: great genetics from her father — a man who threw a world record of 99.72 meters (327-2) in 1983 with the old rule [javelin specifications] and as a result changed the event. Secondly, her father is also a great coach and really understands the event. So all the years of coaching by him is a huge advantage.

San Diego is a great place to train. I really enjoyed my time there, in Carlsbad, from 1992 through 1996. Moving, as Leigh did, can be very disruptive. But now that she is settled in and has a routine, things should really come together in 2016.

I wish her all the best.

Peters: I can only offer my point of view as a clinician and specialist in how the mind functions. I have to be generic because the way I work is very much in partnership with the athlete. I don’t work with “magic” formulae. Others may be able to offer this, but I can’t.

Everyone is unique, so although there may be general rules and principles of how the mind works it is up to each one of us to understand our self and gain insights into how our individual unique mind operates best.

This can be difficult to do — hence we have people who specialize in helping us to gain those insights and then work on skills to apply changes to optimize performance.

The first thing to establish is that an athlete recognizes the need for change and the advantages that change will bring. There is then the commitment to undertake a training programme for the mind (much as you would a physical training program). This means commitment to regular sessions with outcome objectives defined and measured for progress.

For me, these sessions begin with the personal life of the athlete. Here you can begin the process of skill-based learning and then transfer this to the sporting environment for training, competition, injury prevention, dealing with injury and so on.

So my advice is for any athlete who is serious about the psychological aspects of competition to take it seriously, get in touch with someone who they can work with and establish a program for moving forward. The key being that the athlete leads and with their psychological coach clarifies exactly what they want from their mind as the final outcome.

The world’s best female javelin thrower over 60, Cohn won her latest title in August at the World Masters Athletics Championships in Lyon, France. She holds the world record in the 60-64 age group at 123 feet.

Cohn: I have never met Leigh, but I watched the video and read your interview with her. She impressed me by how articulate and honest she was with her answers, and I completely understand and share her struggles.

She really doesn’t need any advice from me. She knows what she has to do. She needs to find her particular balance between the very diverse skills required to throw the javelin well.

Leigh knows what these somewhat contradictory requirements are, but since you are not a javelin thrower you might not be as aware:

You need to have strength and power, but it is also essential that your upper body be loose and flexible.

You need speed, but not so much as to cause you to lose the proper technique.

You need a fierce desire to throw far, yet at the same time you must be relaxed.

She definitely has the desire and strength and skill, but finding that “balance” is where the mental component comes in to play. I can’t advise her how to find that; it is something she will have find within herself.

I will be cheering her on in her Olympic quest, and I share her confidence that she has the ability to achieve her goal.

A three-time Australian national javelin champion, Calvert coached Australian track athletes at the 1980, 1984 and 2008 Summer Games. He has guided several top American female javelin throwers and, from his base in Phoenix, operates JavelinCoaching.com.

Calvert: What might Leigh do physically or technically to improve her chances of making the Rio Olympics?

I have known Leigh Petranoff and her father Tom for five-six years now and I have watched her progression postcollege and have seen her improvements and technical model.

Physically, Leigh has undertaken a great focus on strength in her training, which will pay dividends over the next 12-36 months. She shows sufficient strength to throw mid-60 meters (about 213 feet), but there are physical requirements she now needs to focus on. So her strengths are now bringing out weaknesses that need addressing.

Her thoracic/upper body area needs mobility and awareness in working hard to have her shoulders be able to stretch and reach back more in the power position and when executing.

Long power: Leigh has shortened steps over her last 8 steps and this seems to be due to a huge number of towing. Viewing her videos, it shows her leaning excessively to the front and shortening her lead left leg noticeably. So [as] her right drives, her left leg shortens.

To have equality, she needs to train the lead left leg, reaching outwards and forwards, to create an even stride length on left and right sides. The benefit of this power work is that it stops you sitting on top of your center of gravity and allows for an active penultimate [step].

With regards to technique, my observation it that Leigh has to create torque. I have witnessed Leigh’s personal best, of 58 [meters], and if she had managed to hit her block position closed that throw would have gone 65 meters.

So my advice would be for her to set up the power position with as much torque as possible, ideally closed left side left shoulder 12-1 o’clock.

Also I would like to see Leigh have more reachback during [the] penultimate [step] so as not to land on top of her center of gravity.

Finally I want to see her drive her right knee down into the block as she tends to pop up too early. This will have her hip engage.

What might Leigh do mentally to improve her chances at throwing in the Games?

Leigh has superior focus and competition skills and this has shown during her competitions. Mentally I think Leigh needs to become superior in the area of having her best throws at the start of the competition.

So this should come more during specific training sessions where she practices a peak during warmup. I feel that this is a big area to focus on. She needs six big throws, not the usual two.

I think the 3 Olympic team spots are open and not as it seems with Kara Patterson and Brittany Borman taking the first two positions. Kara has had an unsuccessful international career-distance wise, and I feel like previous Olympic Trials the field is wide open. These two girls haven’t technically advanced, but are throwing 61 to 63 meters (200-206 feet).

Leigh is positioned to compete this season and produce 60-plus (196-10) early. My opinion is that if Leigh can continue to progress on her good points whilst rectifying the things I have mentioned, she will be a force in 2016.

Talent-wise, she give me the impression she is one of a couple of javelin throwers on the rise who can figure in podium finishes.