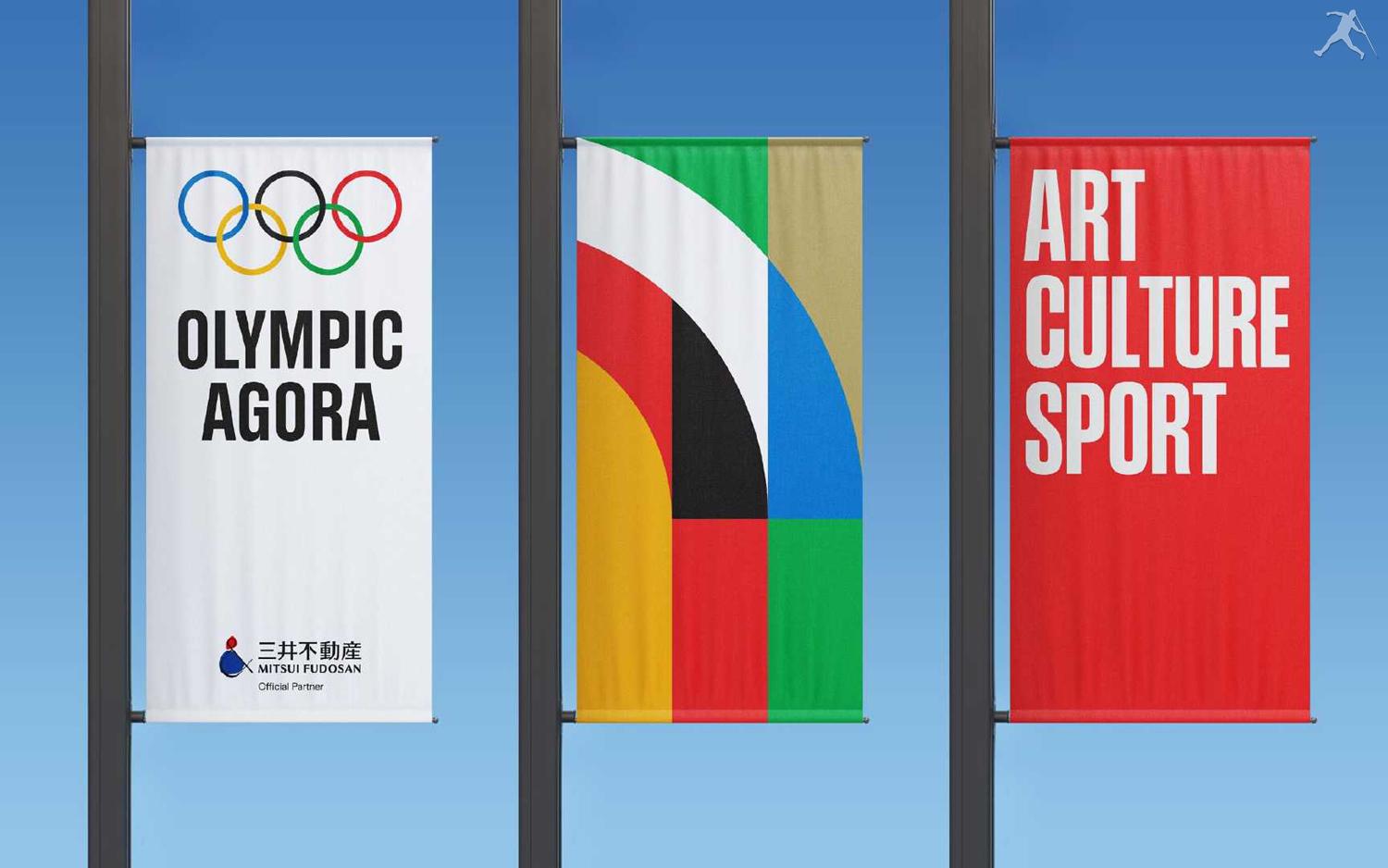 The first-ever Olympic Agora will commemorate the cultural aspect of the Olympic Games Tokyo 2020, featuring a permanent, site-specific legacy sculpture by French artist Xavier Veilhan; a photography installation by Japanese artist Rinko Kawauchi; multimedia installations by Japanese artist Makoto Tojiki and Canadian studio Moment Factory; a series of new artworks by Olympian and Paralympian Artists-in-Residence; and an exhibition of treasures from the permanent holdings of The Olympic Museum. Virtual tours and digital offerings will unite local and international audiences in the Agora experience.

The Olympic Foundation for Culture and Heritage (OFCH) announces the programme for its inaugural Olympic Agora, set to take place around the Olympic Games Tokyo 2020 in the heart of the host city. On view from 1 July to 15 August 2021, the new initiative will present a series of art installations and an exhibition on the Olympic spirit and ideals, leading with the landmark commission of a permanent, site-specific sculpture by French artist Xavier Veilhan.

Resulting from Olympic Agenda 2020, the IOC’s strategic roadmap for the future of the Olympic Movement, the Olympic Agora will realise a key recommendation to “further blend sport and culture” during and between editions of the Olympic Games through onsite and digital culture programmes. Spearheaded by the OFCH, the IOC’s division for arts, culture and heritage, the project is inspired by the public assembly spaces—or agoras—of Ancient Greece.

Located throughout Tokyo’s historic Nihonbashi district, the Olympic Agora will feature installations by Japanese artists Rinko Kawauchi and Makoto Tojiki, as well as an exhibition of works by six Olympian and Paralympian Artists-in-Residence. In addition, the Olympic Agora will present a participatory multimedia installation by Montreal-based studio Moment Factory, and an exhibition of treasures from The Olympic Museum’s permanent collection in Lausanne, Switzerland.

Since its initial conception, the programme has been adapted to ensure staff and visitor safety, in compliance with local and national COVID-19 rules and countermeasures. In line with the prevailing regulations, visitor numbers will be limited and strictly controlled. In addition, onsite installations and activations will be complemented by a robust digital programme, including virtual exhibitions and artist talks, available on the Olympic Agora website and The Olympic Museum’s social media channels for local and global audiences.

To mark the opening of the Olympic Agora ahead of the Olympic Games Tokyo 2020, the OFCH has commissioned Veilhan, who represented France at the 57th Venice Art Biennale in 2017, to create a permanent installation interpreting the Olympic values. Known for his exhibitions challenging viewers’ perceptions, Veilhan will present a life-sized sculptural work entitled The Audience, consisting of five human figures of various ages, genders and nationalities gathered in sport spectatorship. This legacy sculpture will be unveiled on 30 June, a day before the public opening of the Olympic Agora.

Veilhan said of The Audience: “The sculpture is intentionally a tribute to the audience of the Olympic Games, going beyond the sporting feats that are usually celebrated and bringing the focus to non-heroic figures, to highlight the importance of the public.” The artist continued: “This year in particular, the public—the audience—is somewhat the missing star of the Olympic Games. The Audience is not only the title of my work, but is also the summary of the current situation that we are all undeniably living through. It is for me a reason to give existence to this international public, who may be absent physically but all the more watching throughout the world. The sculpture will be its ambassador.”

The Audience comes as part of a series of artist commissions for the IOC’s Olympic Art Visions, an initiative directed by the OFCH. The programme engages leading contemporary artists to reinterpret the Olympic values for global audiences. In 2018, the OFCH commissioned Argentine conceptual artist Leandro Erlich to create a large-scale, temporary installation inaugurating the Youth Olympic Games in Buenos Aires.

At the Olympic Agora, leading Japanese photographer Rinko Kawauchi will also present 16 never-before-seen photographs from Olympism Made Visible, a global fine-art photography project launched by the OFCH to illustrate the impact of sport in community service. Commissioned by the OFCH in 2019, the exhibition, entitled What Is the Joy of the Future? Works from Olympism Made Visible, documents an initiative of the Japanese Olympic Committee to connect Olympic athletes with disaster-affected communities following Japan’s 2011 Tōhoku earthquake and tsunami. The photographs, taken during Kawauchi’s visit to Fukushima in 2019, are “a testament to the healing power of sport and the fragile and precious gifts of nature,” said the artist. In 2021, Kawauchi was shortlisted for the prestigious Prix Pictet award in photography and sustainability.

Nearby at Fukutoku Plaza, Makoto Tojiki’s large-scale light sculpture Solidarity and Collaboration takes inspiration from the relay race in track and field. Prompted by the global pandemic, the installation, conceived especially for the Olympic Agora, will feature two monumental figures in relay motion, in a timely exploration of collaboration, shared responsibility and human potential in team play.

“All my life I have been an artist and an athlete—two seemingly polar opposite pursuits,” said Bradstock, who represented Great Britain in the men’s javelin event at the 1984 and 1988 Summer Olympics. “Then 25 years ago, I realized that sport and art are far more similar than they are different. When I came to this realization, everything changed for me. It changed my approach to my sports training and how and what I created in my art studio,” said Bradstock.

In addition, The Olympic Museum in Lausanne, the world’s largest archive of the Olympic Games, will present the special exhibition The Olympic Spirit. The exhibition will celebrate some of the most iconic moments in the history of the Games, showcasing 145 artefacts from The Museum’s collection in three main sections: “History and symbols”, “Olympic values expressed by athletes” and “The unifying power of Olympism”. Highlights include a complete set of Summer Games medals and torches, including the medals for Tokyo 2020, and select costumes from past Opening Ceremonies.

The Montreal-based studio Moment Factory will also present the interactive multimedia installation Podium Memories. Reflecting on moments of perseverance, solidarity and team play at the Olympic Games through the years, the installation will feature three deconstructed Olympic podiums, which visitors will be invited to “activate” with their silhouettes in dynamic shapes and vibrant colours. By moving their bodies in relation to the podiums, visitors can browse through a curated display of rarely seen images, animated pictograms and audiovisual footage from the Olympic archives.

In addition, residents and visitors to Nihonbashi will have the opportunity to view iconic posters from the Olympic Games throughout the district, as well as a large-scale Olympic gold medal installation at the atrium at Mitsui Tower. As the Olympic Agora’s Official Partner, Mitsui Fudosan will deliver comprehensive support to the Olympic Agora complex in Nihonbashi.

Mitsui Fudosan President and CEO Masanobu Komoda said: “We are very pleased that Nihonbashi will hold the world’s first Olympic Agora, and are truly honoured to contribute to this exceptional project as the Official Partner. The event will showcase the culture, history, significance and values of the Olympics, and promote the integration of sport and culture—a vital element of the Olympic Movement. Through the Olympic Agora’s digital programmes, I hope that audiences around the globe can experience both, the beating heart of Nihonbashi and the Olympic Spirit.”

Virtual tours of all Olympic Agora presentations and related programming will be available to local and international audiences free of charge on www.olympics.com/olympic-agora.