The Art of the Athlete Exhibition

Home > Art  > The Art of the Athlete Exhibition 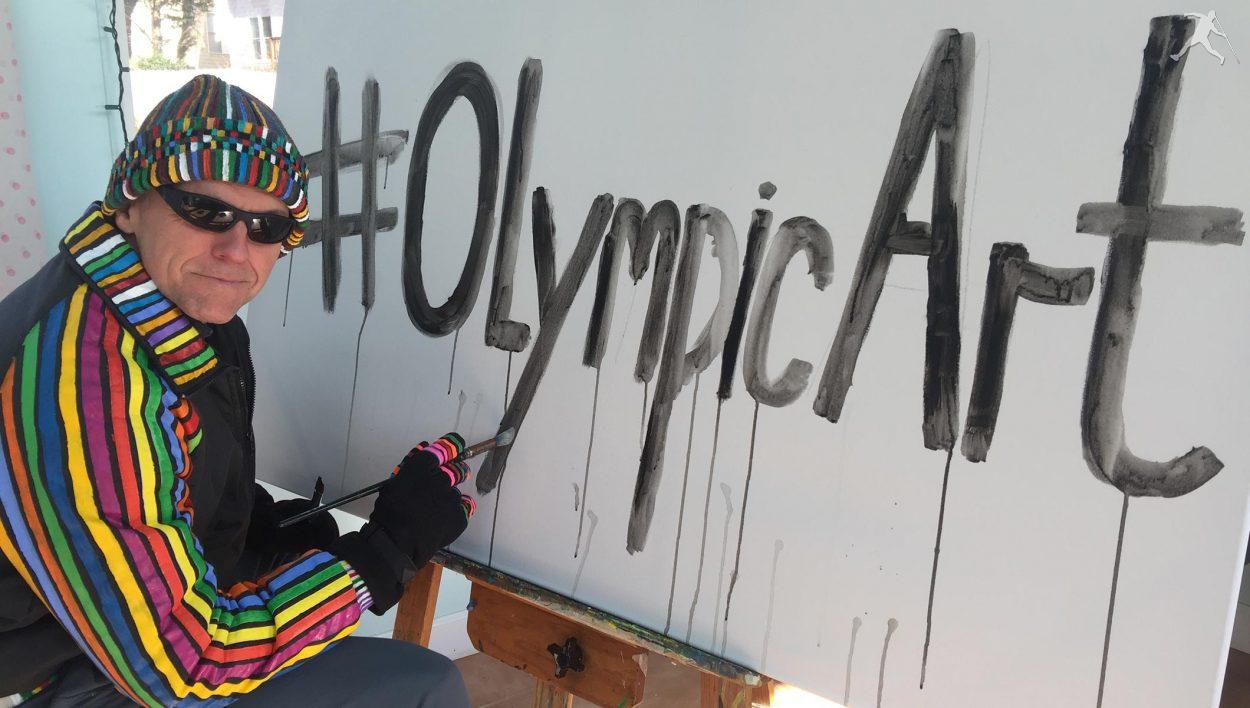 12 Apr The Art of the Athlete Exhibition

THE ART OF THE ATHLETE EXHIBITION

The Art of the Athlete Exhibition 2022

On first reading it may sound like a juxtaposition. One may think that sport and art represent rather opposing worlds and that they have little place alongside one another. But are they really so different?

Not according to Gavin Johnson and Roald Bradstock; two decorated javelin throwers who combine their throwing abilities with enviable artistic talent. Though they have never met, when I spoke to them it became clear that they share a firm belief. That belief is that we as humans are multi-faceted but that all too often we identify so strongly with one area of our personality that we neglect the other sides of ourselves. Roald and Gavin challenge this notion through their dual careers. Put simply, they demonstrate that the athlete can be the artist and the artist can be the athlete.

The gallery’s founder, Georgina Dhillon, shared Gavin’s vision for the Art of the Athlete.  Together they developed their initial ideas into a four week long exhibition which will benefit individual track and field athletes and the athletic community as a whole. Artists who are featured in the exhibition will gain valuable experience working within the creative industry, be able to earn money from the sale of their work and will have the opportunity to expose this sentiment inspired the idea for The Art of the Athlete. Having previously had his work featured in an exhibition at the Zari Gallery, Gavin saw an opportunity for the gallery to showcase the artistic talents of other track and field athletes. His vision was to bring to light the creativity and physical capabilities which coexist within many elite sportspeople. The gallery seemed like the perfect host for such an exhibition on account of its dedication to showcasing art which transcends borders. Located in London’s Fitzrovia, it is described as a cultural hub which curates exhibitions featuring inspiring and innovative artwork from a diverse range of artists.

potentially previously unseen side of their personality. The athletic community benefits by virtue of the charity element of the exhibition, as a portion of the profits will be shared between the Ron Pickering Memorial Fund and the Lloyd Cowan Bursary; two charities which support young athletes in the UK as they pursue their sporting dreams.

Both Gavin and Roald will have their work featured in the exhibition. These days, they are both established and respected artists in their own right but they had vastly different journeys to reach this point.

For Roald, his athletic and artistic careers have long been intertwined. Now known as the Olympic Picasso, Roald grew up in Hertfordshire not far from the home of Ron Pickering, the namesake and inspiration for the Ron Pickering Memorial Fund. Throughout school he always sought to pursue a career in art alongside throwing javelin which led him to accept a scholarship to Southern Methodist University (SMU) in Dallas, rather than staying in the UK where no University would allow him to combine an arts degree with the sporting opportunities he required. Throughout his career, Roald went on to compete in multiple Olympic Games as an athlete, before contributing to the Sydney Olympic Games in 2000 as an artist. His work was featured in an Olympic cultural event held in Lausanne, to promote the Games in Sydney. From this point on, sport and art were firmly combined in Roald’s life. When London won the bid for the 2012 Games, Roald was inspired to use art to promote the Games. Over the ensuing years in the build up to the Olympics, Roald would go on to deliver twenty seven sport-art workshops that reached over one hundred schools around the UK, leaving an enormous legacy for combining sport and creativity within educational settings.

“Just like art, there is poetry within sport” says Roald. “It’s all about timing.” As we talk more, Roald explains further. In both sporting and creative industries, magic exists in the breaking down of barriers and changing the way people think and what they believe is possible. Roald uses Roger Bannister’s four-minute mile as an example; it was special because it had never been done before so it shocked and inspired. When an artist produces something new and it speaks to people it has much the same effect, showing them a perspective they hadn’t considered possible.

Not only does Roald embrace both the artistic and athletic being within him, he actually blends the two by bringing creativity to his training and competitions. As he approaches his sixtieth birthday he continues to push the boundaries of what is possible within javelin, using creative ideas to evolve his training methods in order to get the best results from his body. At the time that the Art of the Athlete will be impressing audiences in London, Roald will in fact be in
Arizona, attempting to break the age group World Record in the Javelin. As our conversation drew to an end, Roald explained another parallel which he sees between sport and art. “If sport was simply about formulas and measurements”, he says, “I would be little more than a club level athlete. It is the intangible factors such as passion and flair; the creative elements which are evident in all the incredible sporting performers we watch on our screens and at events, that has enabled me to reach the level I have.”

Unlike Roald, Gavin has not always tapped into the artistic side of his personality. Though he comes from a family of artists, a lack of creative opportunity and an uninspiring art teacher set him on a path which focused entirely on the sporting side of his personality. Like many athletes, he fell into the fitness industry because it felt like a complimentary career to go alongside elite sport. However, Gavin explains that he never felt truly himself whilst working in the fitness industry.

When I asked him if he had any advice for young athletes looking to submit their work for theIn 2020, when the world was plunged into the first COVID lockdown, Gavin was left with a wealth of free time. Like many other athletes he was unable to train and as such, he set his mind to developing a new skill set that would see him come out of lockdown better off than he went in. Amongst other things, Gavin picked up a paintbrush again for the first time in years after a friend offered him some spare canvases to work on. Over just a number of weeks he honed his skills and began to share the results on social media, receiving a positive reception and even selling some of his paintings. Over the following months his passion for painting took hold and he built up a successful business through social media. Just two years later he is a fully fledged artist, working with acrylic paint to produce large scale paintings which have been displayed in a number of exhibitions held at the Zari Gallery. He has been able to acquire his own studio in Brixton where he works most days alongside training for Javelin. Gavin tells me that in allowing his creative side to flourish, he has become much more comfortable and whole as an individual. He is now in a place where he can accept the successes and failures within sport without allowing them to define him as a person. He describes life as “more like the Andes than Mount Everest. It has multiple peaks” which can be enjoyed by exploring all the different sides of ourselves.

exhibition, he had this to say. “It all starts with you. Stay true to your creation and your story. In doing so, you’ll give audiences an insight into how you see the world. Be ok with the fact that not everyone will agree with, or appreciate your work. Art is subjective so be confident in your vision.”

On that inspiring note, if you’re an athlete who would like to be considered for inclusion in the exhibition alongside Roald and Gavin, please see the details below. Submissions must be made by 15 April 2022.

How To Enter
You may submit up to four examples of your work via the portal:
https://www.artgalleria.com/portal/b7e34a1

Each submission should include:
● A high quality digital image (JPEG or PDF with a minimum of 300 dpi)
● Image details: Title(s) of work, medium used, size and price
● A statement and bio from the artist. This can be typed in the body of the email or sent as
an attachment.

Your work must be submitted by 15th April 2022. If you are successful, you will receive an email alongside a contract and inventory list.

If you require any further information please email us at info@rpmf.org.uk or contact the gallery at info@zarigallery.co.uk