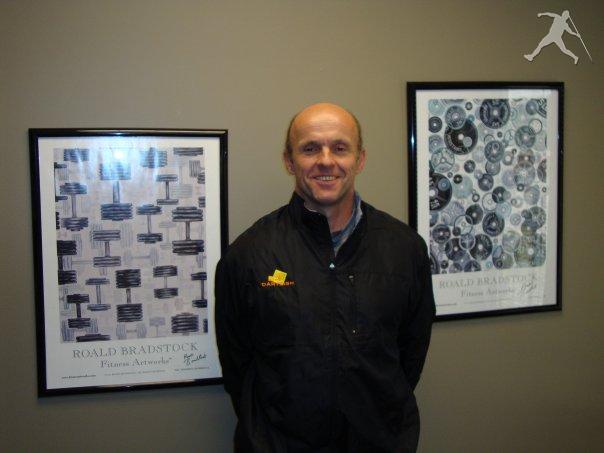 This past weekend I traveled with my family, my wife and mother, to beautiful Fort Myers, Florida for the official grand opening of the Art of the Olympians (AOTO) Museum. International Olympic Committee member and five-time winter Olympian HSH Prince Albert II flew in from Monaco to attend and participate in this special historic event. There were lots of activities scheduled to celebrate the occasion: Olympian school and hospital visits, Olympians breakfast with Prince Albert, a press conference and student round table and a black tie reception and Gala banquet, all with Prince Albert. On Sunday there was even a friendly game of volleyball with the prince. Wow! But it was during the “Painting with the Prince” event, on the lawn in front of the Museum on Saturday afternoon, that something quite extraordinary happened and something truly historic. Even though I was right in the middle of it I did not realize, for several days, what had actually happened: Something truly historic had taken place. 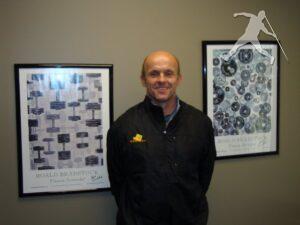 In homage to Al Oerter, the late, great Olympic Icon and four-time time Olympic gold medalist in the discus and founder of the Art of the Olympians, all the Olympians including Prince Albert put on white body overalls and began creating art as Al used to do: pouring paint onto a giant canvas and then throwing discus’ splattering paint across the canvas and beyond.His wife of 27 years, Cathy Oerter, and I poured paint onto a canvas which lay on the grass. Then Prince Albert and I and others threw our discus’ onto the wet paint. The paint went everywhere – surprise, surprise! There were several hundred people crowded around the laid out canvas cheering, photographing and filming. Despite repeated warnings to stay back to avoid getting paint on them they remained close and seemed to want to get splattered with paint!I came to realise a few days later that the spectators and photographers and people filming from the media, documenting the creation of this collaborative painting actually became part of the performance. What had actually transpired was what is called in the art world: “A happening” – which is a performance, event or situation that interacts with the audience, making them, in a sense, part of the art. The original idea was to have Prince Albert and other Olympians work together to create a collaborative symbolic Olympic piece of art to celebrate the opening of the Museum and to be hung, when dry, in the museum to document the occasion.

The painting of splattered paint by a group of Olympians and Olympic artists is a great keep sake, a unique piece or memorabilia. It’s haphazard markings and lack of structure are an interesting contrast to the discipline and focus the creators had to have to become Olympians.Jackson Pollock made art history back in the 1950’s with his “action” paintings by dripping paint onto a canvas. Without a brush he fought for control to create his work. Last Saturday we went several steps further in losing and trying to gain control in creating a real “action” painting. With multiple people, throwing a discus’ onto the wet canvas the kayos and lack of control prevailed, but that did not matter. In fact that was the intent.

Jackson Pollock also made art history by filming and documenting his method, revealing his process. The old film footage of him painting alone outside his studio is historic and he is credited with being the founder of modern day performance art. When Prince Albert, myself and all the other Olympians took part in creating a single piece of art we paid homage to both Al Oerter and Jackson Pollock.

The performance, the spectical if you will, became the real piece of art. The end result did not matter. It was the event: Royalty, Olympians, the media and the public all coming together at the same time to celebrate and create something.

It took me several days to realise that what had actually happened Saturday afternoon was what is known in the art World as “A Happening” which is a performance, event or situation that is meant to be considered art.  In this case the performance aspect happened (excuse the play on words) by accident.  “Painting with the Prince” was meant to be a simple fun fund-raising event creating a piece of art. But it was this event that became the real piece of art and art history.

Key elements of happenings are planned, like this one was, but artists sometimes retain room for improvisation as we did. In true happenings the boundary between the artwork and its viewer is eliminated as indeed happened on Saturday afternoon, making the audience a part of the artwork.

But this was no ordinary run of the mill “happening”. This was something very special and very unique: This was a “Royal Olympic Happening”.

Prince Albert’s presence in Fort Myers to support to the Art of the Olympians was a great boost to what we are doing to promote Olympic ideals, sport, art and culture around the world. But it was his participation: wearing overalls, throwing a discus, splattering paint surrounded by an enthusiastic crowd that really made the day special and made history. For in that moment the Prince, an Olympian and IOC member, became an artist and joined the ranks of the Art of The Olympians and the likes of Al Oerter, Bob Beamon, Florence Griffith-Joyner (Flo-Jo) and Peggy Flemming to name but a few.

The Olympic family is about 100,000 members strong around the world. The Olympic artists family is a much, much smaller group with about 40 members at present.

It is a great privilege to part of two such families and to have my own family, my mother Mary and wife Clarissa, there this past weekend to experience the events and see history in the making.

I have to say next to making the Olympic team in 1984 and 1988 and seeing my two children being born, “Painting with the Prince” was one of my all time life experiences.

Thank you His Serene Highness Prince Albert II of Monaco for your support of the Olympics and the Arts.

Comments
Annabelle17 June 2011 at 03:20+1
What a fantastic event the celebrate the Olympic spirit. Thanks for telling the story and good luck for the London 2012 British Olympic trials.