Simon Turnbull: On the YouTube section of Roald Bradstock’s website, you can see a clip of him throwing in the Olympic javelin final in Los Angeles in 1984.

On the YouTube section of Roald Bradstock’s website, you can see a clip of him throwing in the Olympic javelin final in Los Angeles in 1984. “He’s had injuries,” commentator Stuart Storey says of the javelin thrower-cum-artist who has come to be known as “the Olympic Picasso”. “He has got a weak back.”

Throughout his javelin career, Bradstock has been troubled by back problems. Unknown to many, he suffers from spina bifida. It was quite an achievement, then, for the Hertfordshire native to make the British team for those 1984 Olympic Games in LA and reach the final and finish seventh.

There has been quite a string of achievements since then, too – Olympic recognition for his art, the world record for throwing an iPod (154 yards) – but the supreme accomplishment could come down the road from his old family home in Broxbourne next summer, at the 2012 Olympic Stadium in Stratford.

At 49, Bradstock stands third in the British ranking lists for 2011 – behind two javelin throwers (James Campbell, 23, and Matthew Hunt, 20) who were not even born when he travelled to the 1984 Olympics as part of a British track-and-field team that included Seb Coe, Steve Ovett and Daley Thompson. As Bradstock threw 74.73m at a meeting in Tucson, Arizona, a fortnight ago, his aim of making the 2012 Olympic trials next summer seems assured. His goal now is to make the British team for the 2012 Games, by which time he will have turned 50.

“I just look at it as another challenge,” Bradstock said. “I was six when I was diagnosed with spina bifida. That was just a couple of months before the Mexico Olympics in 1968 and I remember watching Bob Beamon, Dick Fosbury and Al Oerter. They have been the inspiration for what I’m doing now. 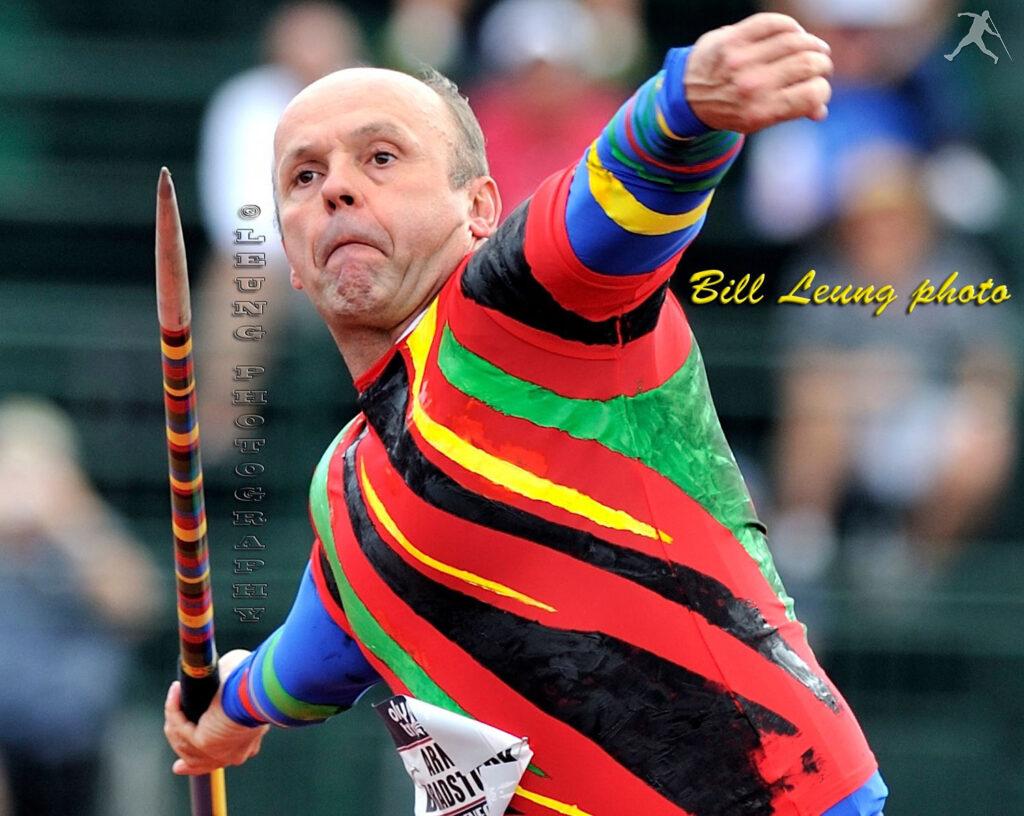 “What I’m doing, I guess, kind of defies logic. It’s uncharted territory as far as my age and the level I’m at. I have the advantage of experience but the price is the age.

“If you’d asked me a couple of weeks ago if I could make the team I would have said ‘No, impossible’. Now, having thrown the 74.73m, I would say ‘Improbable, but there’s a possibility’. If I can put everything together and get a year’s training behind me, I need a minimum of 79.50m, the Olympic B standard, and then to win the trials.

“I’m going to be 50 in April. I want to take that out of the equation as far as thinking, ‘I can’t do it because of my age’. What if I could do it? A 50-year-old in the Olympics? That would be a pretty good story.”

It would indeed: another remarkable chapter in what has been one long tale of the unexpected by Roald, the Broxbourne boy who spent his student days in the United States and has settled near Atlanta. After the Los Angeles Olympics, he set a world best with the old-style javelin in 1985, throwing 91.40m, and made the British team for the 1988 Olympics in Seoul, placing 25th. Bradstock then switched allegiance to the United States and was a reserve for the 1996 Games in Atlanta. As a full-time artist, he won the US Olympic art competition in 2000 and had his work exhibited at the Olympic Museum in Lausanne. Hence “the Olympic Picasso”.

Last year, Bradstock made the decision to nail his colours back to the British mast, finishing eighth while suffering from injury at the national championships in Birmingham. He makes regular trips back to Blighty in his role as a legacy ambassador for the Youth Sport Trust, lecturing on art and sport at colleges around Britain.

The Olympic Picasso has also perfected the art of oddball record breaking. As well as the iPod mark, he holds the world records for throwing an egg (118 yards) and a goldfish (56 yards).