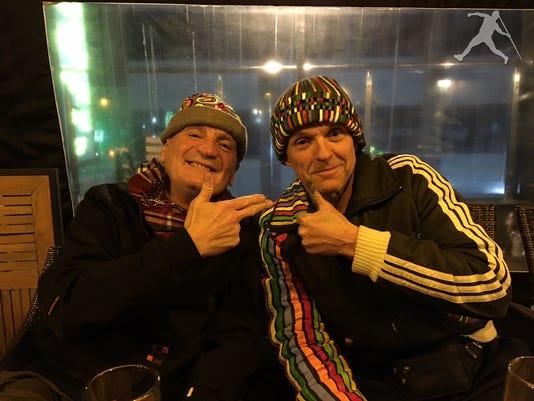 Raise your hand if you remember the old “Saturday Night Live” sketch with Steve Martin and Dan Aykroyd about the Festrunk brothers from Czechoslovakia (like I said, it’s old). Their catchphrase was: “We’re two wild and crazy guys!” If you didn’t raise your hand, check YouTube. Good 1970s stuff. 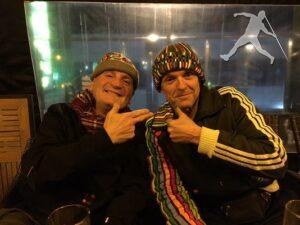 And I’ve found their real-life kindred spirits in 2018 in South Korea, although the biting barbs traded back and forth between Roald Bradstock and Jean-Blaise Evequoz also evoke memories of Walter Matthau and Jack Lemmon in “Grumpy Old Men.”Regardless, they are non-stop comedy action, and that’s not why they’re here. They are former Olympians and working artists who are staying in the Gangneung Olympic Village and running the Olympic Art Project. Essentially, they are recruiting athletes from the village to help create paintings during the Games, part of a stated Olympic agenda to blend culture and athletics. There will be a painting representing each of the sports taking place in these Games.

Bradstock threw the javelin for Great Britain in the 1984 and 1988 Summer Olympics – the latter taking place in Seoul – and Evequoz won a bronze medal as a fencer for Switzerland in the 1976 Summer Olympics in Montreal. Bradstock came up with the idea for the project, and he and Evequoz are joined by Lanny Barnes, a three-time Olympic biathlete from the United States.

And honestly, I probably wouldn’t have heard about the project if we hadn’t bumped into Bradstock and Evequoz at a Gangneung sports bar Saturday night. This is a livelier and bigger town than I would have guessed, and in between the massive media village and massive Olympic village for athletes is a cluster of restaurants and bars. What could go wrong?

I was out looking for dinner, and Jeff Seidel of the Detroit Free Press tagged along. We ended up having to sit outside at a loud, packed place full of folks speaking a variety of languages. And we had to share a table with those two, along with a Korean couple out for dinner. The six of us ended up mostly laughing for two hours straight, mostly because of Bradstock and Evequoz. And I can’t really provide any quotes here. Most are not safe for family publications. But the Korean woman, whose “American name” is Julie, did teach us the correct pronunciation of “Gamsahamnida,” which is Korean for “thank you.” And of “Geonbae,” which is “cheers.”

And then we all hugged and went home. Only at the Olympics. As for my Sunday assignments, they were all hockey – watched the U.S. men practice and did some work for a couple of features to come, then covered the U.S. women in their opener, a 3-1 win over Finland. Tennessean photographer Andrew Nelles got some great shots of that game. Nelles, by the way, has already more than earned his Olympic stripes – hiking up a mountain in bitter cold to shoot the Opening Ceremony.