The Olympic Picasso’s Connection to Franchising

One of the franchising community’s top leaders has a first-hand view of the “drive to win” needed to succeed at the Olympic Games. Any Lab Test Now CEO Clarissa Bradstock’s husband is Roald Bradstock, an Olympic athlete in the javelin and award-winning artist. The multi-talented couple just returned to the U.S. from the 2018 Winter Games in South Korea.

Roald Bradstock painting during the 2018 Winter Olympics in South Korea.

Clarissa Bradstock has worked diligently to grow the Any Lab Test Now brand. In the past three years, she’s focused on unit-level economics and franchisee satisfaction. A dedicated strategic planner, she is also a former standup comedian.

Roald started throwing things around in his native Great Britain when he was just six years old. When not fine-tuning his javelin skills, Roald explored his creative side, either drawing or sculpting. His determination, dedication and competitive drive resulted in competing in the 1984 and 1988 Summer Olympics. It wasn’t long before his love of painting attracted the eyes of the International Olympic Committee. He has earned the nickname of “Olympic Picasso.” Roald spent three weeks at the 2018 Winter Games creating art with non-artist athletes at a studio in the heart of the Olympic Village.

While Clarissa and Roald often laugh at how different they are, they often realize they are quite similar. “We met after Roald moved to Atlanta to try out for the Summer Games in 1996,” Clarissa recalls. “He’s taught me how to build on my strengths and always stay focused – which is a win-win for my company and all of its franchisees.”

One example of how the couple has sought to combine their skills is apparent at Any Lab Test Now’s Atlanta headquarters and franchise locations around the U.S. Clarissa commissioned Roald to make paintings for the offices to help brighten up the atmosphere. 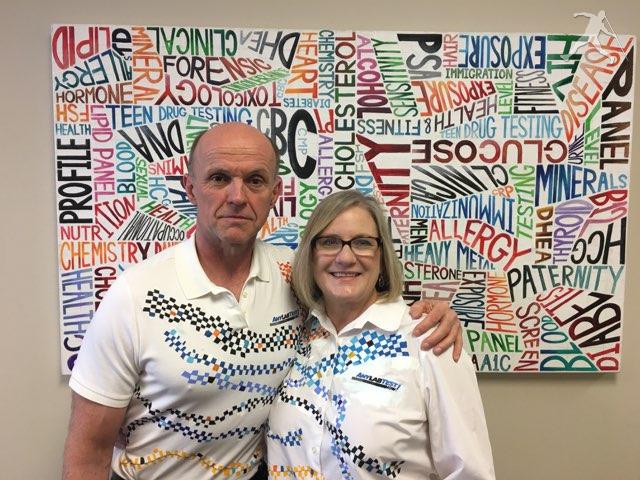 Roald and Clarissa Bradstock at Any Lab Test Now’s headquarters in Atlanta.

“When people come in for a lab test they want to feel cozy and warm,” Clarissa Bradstock says. “They want a good vibe and Roald has created that with his paintings.” When searching for creative ways to solve issues in the company, Clarissa looks at her husband’s paintings and “it inspires me to be creative and think outside the box when running this business. I often think if he can throw javelin 275 feet and compete in the Olympics, I can tackle any business challenge that comes my way.”

Read a full version of this story in an upcoming edition of Franchising World. Find out more about franchise opportunities at Any Lab Test Now.