Will the Olympic Picasso be in Malaga?

Home > Art  > Will the Olympic Picasso be in Malaga? 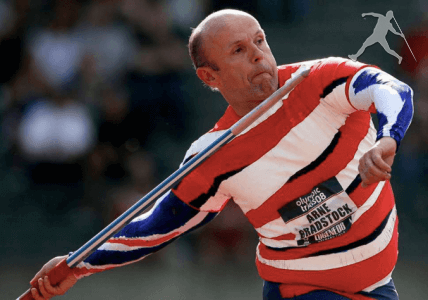 30 Jun Will the Olympic Picasso be in Malaga?

Will Olympic Painter compete in Malaga?  Over 40 years a World class thrower

He is conspicuous even in the largest crowd; he competed in the 1984 and 1988 Olympics Games, narrowly missing out on the 1996 Atlanta Olympics, he was still in the running for selection for the British team in the London 2012 Olympics although he was then aged over 50, only missing out on the B Standard by cms throwing the 800g javelin out to 72.78m. He is of course Roald Bradstock the flamboyant spear throwing Painter, fondly referred to by his huge social media followers as the Olympic Picasso.

His paintings are famous, so too is his extraordinary longevity at such a high level, being good enough to be an Olympic trialilst from 1984 through to 2012. He won a European Junior silver medal as a 19-year old, ranking him 2nd best Junior thrower in the World. When he is too busy painting, he still has the extraordinary ability to come back where he left off as he is so single minded in his training.

He has made enquiries to the British Masters about competing in Malaga and there are still a few days to go before the closing date on 11 July, should Roald grace the Championships, he has to-date 18 opponents including Emmanouil Pattakos of Greece who has thrown 63.36m, there are two French throwers over 55m, Alain Guicharrousse and Jean Babtist Siselo, and a few who have not declared any distance.  The M55 javelin is scheduled for Wednesday 12 September at Estadio C.Málaga.

Roald, if he is there, will of course stand out in the crowd as he always paints his own clothing and his javelin in matching colours.