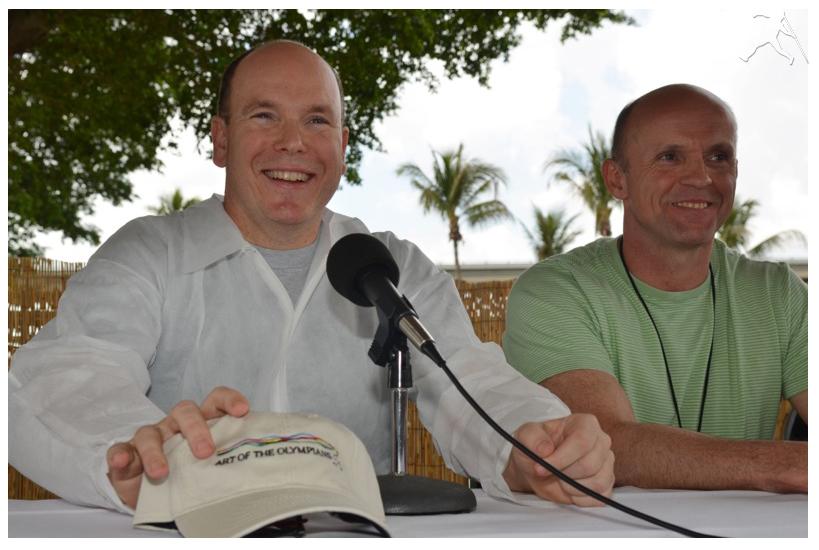 Art of the Olympians
By Betsa Marsh, Postmedia News April 1, 2011

His Serene Highness Prince Albert II of Monaco kicks off his running shoes and pulls on a white jumpsuit. Just point him to the paint.

Handlers guide him to a giant canvas stretched taut on the coarse Florida grass. Winding up, he hurls a discus into a tri-color puddle of paint and the colours — and the crowds — explode.

This first splat! signals the official opening of the Art of the Olympians Museum in Fort Myers, Fla., with paintings, drawings, photos and sculpture by more than 30 Olympians. 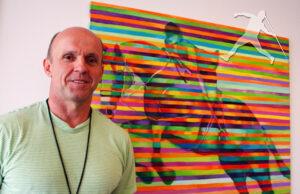 The Prince, a bobsleigh competitor in five Winter Olympics and a member of the International Olympic Committee since 1985, is an influential fundraiser for the museum. In March, he was joined by 23 fellow Olympians to launch the museum, housed in the retrofitted City Pier building on the broad Caloosahatchee River downtown.

Olympians arrived from around the world — on their own dimes— to honour the memory of museum founder Al Oerter and bring a five-ringed Olympic spotlight to the athletes’ artistic work. They splash-painted with discuses on giant canvases just as Oerter did — he won four consecutive Gold Medals in the discus from 1956 to 1968.

Oerter’s paint-splattered shoes are showcased in the Art of the Olympians gallery, beside his wife Cathy’s old hand mixer that he appropriated for his artwork. As the sign says, he eventually had to buy her a new one.

Cathy Oerter was the first person Prince Albert hugged when he arrived on the riverside lawn. She and Fort Myers resident Liston Bochette III, a five-time decathlon and bobsleigh Olympian representing Puerto Rico, carried on Oerter’s dream of an Olympians’ art museum after his death in 2007.

Oerter’s own fiery “Ignition,” a discus-flung burst of reds, orange and yellow, glows on the wall near his spattered shoes, brushes and mixer.

While the athletes are certainly not mandated to create around Olympic themes, many gravitate to the sporting worlds they know best.

In a coloured pencil drawing, Bochette evokes the spirit of the man who created the modern Olympic Games, Baron Pierre de Coubertin.

The mustachioed baron peers out from the scarlet tongues of the Olympic flame.

Gold medalist figure skater Peggy Fleming presents a dark abstract of The Dancer, a pensive woman with arms akimbo. Australian swimmer Shane Gould, winner of five medals at the 1972 Olympics, photographs above and below the water line.

She captured a swimmer in mid-stroke with Bearded Lady, and children’s little legs treading water in Hanging Out Wadeye NT.

Gould was one of the artists in the first Art of the Olympians at Fort Myers’ Alliance of the Arts, held in conjunction with the 2006 Winter Games in Torino, Italy.

That exhibit went on to New York City with shows at the National Arts Club, the New York Athletic Club and the United Nations.

Following the museum’s progress “has really stimulated my photography,” Gould said at the opening, “and helped me interpret what it means to be an Olympian.”

Sculptor Larry Young, the only American to medal in long-distance walking — he took home the Bronze Medal in 1968 and 1972 — has been making bronzes for the past 25 years. His minimalist sculptures freeze the fierce grace of gymnasts in a split-second.

While all the competitors focused on the Olympians motto “Swifter, Higher, Stronger,” artistically it’s long jumper Kader Klouchi of France who captures speed and momentum best. His acrylics nearly race off the canvas, with a kayaker, dancer, sailor and cyclist hurtling to spectacular finishes.

“It’s just like doing our best in sport,” said Klouchi, who competed in Barcelona in 1992.

“This is the same way to express yourself.”

Yet not all Olympians wanted to focus on the athletic facet of their lives.

“I shied away from sports subjects at first,” confided javelin thrower Roald Bradstock.

“I would do landscapes, and when I showed my work, I’d put the landscapes in the front of the booth and Record Breakers in the back.” He gestured to the sharp-stroked charcoal of two runners charging neck to neck.

“People came through and said ‘This is your best work — why is it in the back?’ I decided that sports express who I am. I am blessed to have two passions and two skills, and able to combine them.”

Bradstock, who just “smashed the U.K. Master record” in trials, is the only one of the 24 Olympians at the opening still competing. Now a resident of Atlanta, he hopes to compete in the 2012 Summer Olympics in London, near his Hertfordshire birthplace.

During the 2006 Art of the Olympians show in Fort Myers, “We talked about having a home,” he recalled, “and with Al Oerter and Liston Bochette here, it made sense to be in Fort Myers. 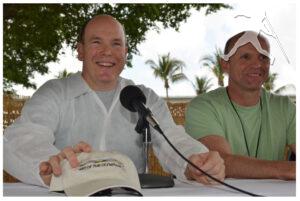 “It’s a wonderful building and a wonderful location,” he said, looking out the gallery picture windows to the dark Caloosahatchee. “It’s key to have a home to work from internationally.”

The new museum is just part of the artistic expression blossoming along the antique brick streets of Fort Myers. Three new art galleries have opened since January 2011, and hundreds of people jam these sidewalks the first Friday of the month for Art Walk, a cordial meet-and-greet meander in and out of restaurants, shops and gallery doors.

Howl Gallery and Tattoo goes in for a West Coast Pop and comic book vibe, while painter David Acevedo of Puerto Rico sprinkles his own abstracts among other artists’ work at his daas gallery.

Art for ACT Gallery, owned and operated by Abuse Counseling and Treatment, Inc., raises money to counter domestic violence and sexual assault from its storefront gallery, a vintage space of plank floors and brick walls.

Down First Street, where cattle were once herded on their way to Cuba and South America, one of the city’s largest temples to the arts is getting a new lease on life.

Now the Sidney & Berne Davis Art Center, the 1933 Fort Myers post office has had a long, checkered history, with a federal courthouse moving in after the mail moved out. Then, in 1998, the county built a new courthouse, “and they turned off the lights, locked the doors and didn’t tell anyone that the roof leaked,” said Jim Griffith, a violist with the Naples Philharmonic and savior of the post office.

“The building was melting, things were growing in here — it was pathetic.”

What Griffith saw beyond the moss was a lofty-ceilinged space that would work for music, dance, theatre and art. The city agreed to rent it for $1 a year for 99 years. More than half way through its $5 million campaign, the work in progress drew 65,000 visitors in 2010, its first year.

On a recent Art Walk at the Davis Art Center, artist Regan Hutchinson festooned her sister Carmen as Rebirth Earth, an environmental piece about the natural world represented by Carmen’s floral crown and belt triumphing over human pollution, manifest in the model’s plastic-and-newspaper dress.

It’s like John Stilling, an American rower who earned the Silver Medal in the 1984 Olympics, said at the opening ceremonies of the Art of the Olympians.

“Instead of learning to paint, I try to learn to reveal the art inside me. Let your spirit out and show it to the world.”